This is one of those books that just called me.. The cover design is lovely, and its cover is that lovely silky paper that feels like a dust jacket - even though this is a paperback edition! These are the things that you NEVER experience with the whole e-book thing... 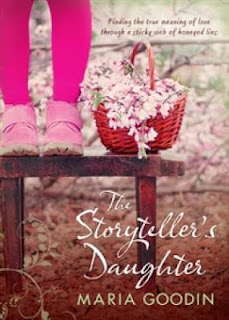 What do any of us really know about our early childhoods, or our parents' stories? Only what they or other people tell us... That is the essence of this exquisite book. Meg May grows up believing that her father was a French pastry chef who died in an accident that was somehow connected to his work; that as a tiny, failing to thrive, premature baby, she was put on a windowsill to ripen; and that the scar on her cheek was a bite from one of her mother's crab cakes. These, and other fanciful stories, form the basis of the family history that Meg learns from her fairytale-telling, cookery-obsessed mother.

When she is eight, her class teacher sets an assignment entitled 'My Earliest Memory'. When her turn comes, Meg stands up to read her paragraph:

In my earliest memory I am very little and I am sitting on the kitchen floor at home and my mum is about to start chopping runner beans when they all leap up and run away. My mum says she knew she shouldn't have bought runner beans and then she starts chasing them and they are running in circles round me and I am laughing. It was very funny.

The teacher is not amused, and the children she thought were her friends are laughing and sniggering behind their hands, and she can hear muttered whispers of, 'Liar...'

The trouble is, the story is one Meg 'remembered' through the many tellings by her mother, who has filled her childhood with similar fanciful tales, shying away from any direct questions for what really happened. This instance is the final straw for Meg who, since beginning school has become increasingly isolated as the world of make believe that has receded quite naturally for all the other children remains the core of her existence, making it impossible to have friends home, and unable to answer basic questions about her family.

She rebels, refusing to play her mother's game any longer, eliminating anything fanciful from her life, and becoming obsessed with truth and logic. At twenty-one, she is on the brink of a potentially successful career as a scientist and is in a relationship with a man who is already well-established in his own scientific field. Then she gets word that her mother is ill, very ill, and she goes home. What is intended initially as a short visit to 'sort things out' and get the low down from the doctor becomes their final summer together. Meg, realises that this is her last chance and, egged on by her boyfriend Mark, starts a process of finding out the truth from her mother - about her father, her early childhood, all the things that were covered up by her mother's storytelling. Time and again though, she meets roadblocks - not the least being her mother's apparent inability to actually remember the real events and subsequent collapses if pushed - which Mark interprets as willful, but which Meg comes to realise are genuine, serious distress. Ewan, the gardener her mother has employed, further confounds Meg with his mixture of what appears to be a similar brand of fancifulness as her mother's, coupled with surprising bits of facts and figures which pop up in their conversations.

When Meg finally stumbles over a potential lead, she prevaricates - perhaps, after all, it isn't so important to know the 'truth'. Perhaps the important thing is that she spend the time living the truth of the actual relationship she has with her mother. However, she has set a train of events in motion that, unbeknown to her, she can't stop, and her mother's past comes back to enlighten her of the real story. She is left with two stories - the real story and what her mother created to protect both herself and Meg from what actually happened. She comes to understand that truth isn't always freeing, and that there can be validity in seeking to escape.

This is a coming of age story with a difference. Although Meg is of adult age, there is much about her that is quite childlike, and the rebellion and angst of adolescence are still very much part of her make up - in part because of the fairy tales, but also because she holds onto her sense of having been hard done by for so long. The summer with her dying mother, who holds true to form, is the first time since she was eight that she has just spent time with her... The conflicts are still there, but in their daily conversations and activities, Meg comes to realise that one thing underpins everything - her mother loves her no matter what, and always has. Realising that for all Meg has tried to push her away, has left her out of situations for fear of embarrassment, has absented herself, her mother has always been there, unchanging, loving, caring, cooking (!) and asking nothing of her other than she be herself.

I'm drawn to mother/daughter stories at the moment, and stories about how mothers and their children build and maintain their relationships throughout the rough and tumble of getting through life at different stages. I don't think I was quite expecting the depth that this one offered. It's gently written, but there are some powerful messages contained within the story. I really couldn't put it down...
Posted by Kaz at 22:45