There's a saying that I stumbled across once upon a time, which my mother promptly appropriated - it's written in her tiniest notebook that lives in my handbag (the $1 coin is there so you can see just how tiny it is): 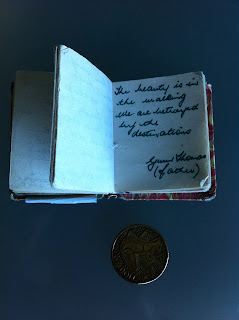 If you click on the image, you'll be able to see a bigger version and read Mum's beautiful script. I can't for the life of me remember where I found it, only that - thanks to my dear Ma scrupulously notating - I can tell you that it was attributed to the father of Gwin Thomas. Who Gwin Thomas was I do not know - it was one of those literary mysteries that we never solved. If anyone out there knows, I'd be delighted to have it solved!

Anyway...in my usual divergent style (DB would be telling me to get on with it already!), we're just back from a week away. I'm a great advocate of travel for travel's sake - and love nothing more than a road trip with someone of like mind so that if something looks interesting, we can stop and have a look...rather than being stuck in a car with someone who is so hellbent on getting from point A to point B that whatever is outside the windows is just a horrible distraction. Happily, DB and I love stopping and starting. We also had no expectations of our destination - neither of us having been there before... Consequently, both journey and destination were thoroughly enjoyable, we're just home, and neither of us really felt quite ready to exchange the fresh air, peace and tranquility of far south coast seaside towns for the bustle of Sydney. However, back we are, and the purpose of this post is to show off my LOOT! I can sniff out a bookshop with an industrial peg jammed on my nose, I swear! I had DB in fits.

So, here is the new, highly eclectic pile of reading ahead of me. I did buy two of the books for DB, actually - TRUE - but that doesn't mean I won't read them...! 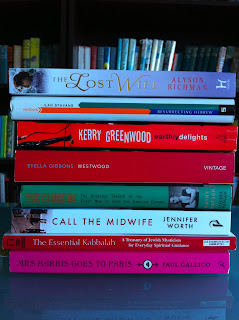 I've already gobbled up Earthly Delights - which was a re-read, and a book I'd been hunting for ages, having borrowed it originally, before acquiring further books in the series, but hadn't been able to lay my hands on a copy - until we found the secondhand bookstore in Mogo... So, in the next day or so, as routine kicks in again, I'll post on that - great, light-hearted (if this isn't a complete oxymoron...) crime fiction by a Melbourne writer.

And, just as a wee, happy footnote - while we were away, I went over 10,000 hits on my blog since I started early in 2012. Many, many thanks to all my readers - regulars, lurkers, and occasionals. I love hearing from you all, so feel free to drop by and leave a comment - I love it when a post generates a conversation, and it never fails to surprise me which posts take off...
Posted by Kaz at 00:06