DB had a huge weekend of extra work so I'd anticipated not spending much time with him, and then he called to ask me very formally if he could take me out to lunch on the Sunday. He wanted to take me to a place we'd seen but not tried, and to cap it off, he said, there's a cool looking bookshop over the road... So, lunch was had - and very nice too - and then we wandered across the road to check out The Blues Point Bookshop. This is an absolute duck of a bookshop - tiny, but crammed with a fabulous collection of books. The shelves include handwritten precis of many of the books, and it's a wonderful mix of all the things you could possibly want in a bookstore. We spent some time there and I came out with a goodly stack of books, including this one: 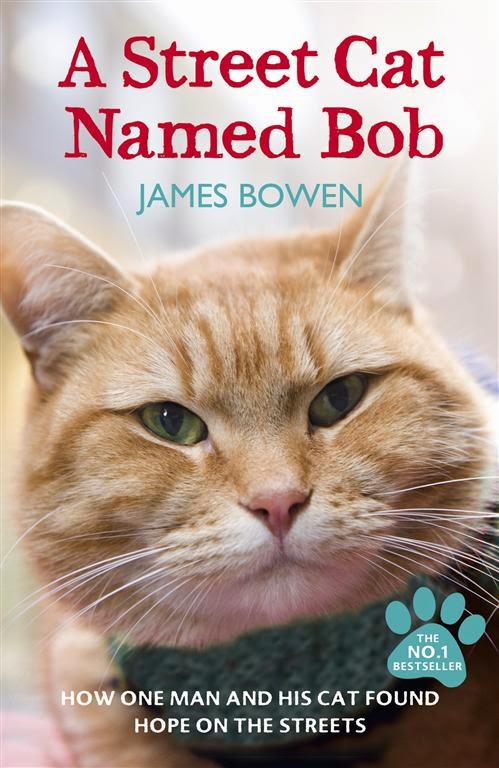 Now, this is not the kind of book I'd usually pick up. However, DB has this thing about naming everything 'Bob'. It's become one of those running jokes now, and every time we see a business or sign with 'Bob' in the name, it cracks us up. I had to pick the book up off the shelf to show him, and then, of course, I read the blurb and decided it looked like a lovely read, AND something that DB himself would probably read and enjoy at some point so I added it to the pile.

'Heart-warming' is an adjective you can count on finding somewhere in the blurb or snippets of reviews on the covers of animal stories. This one is no exception. However, I have to say, it's one time that I feel it's entirely justified. London based James Bowen is a recovering drug addict in his late twenties who is living in assisted accommodation, is on a drug recovery programme, is largely isolated from his family (his parents are divorced; his father living in the south of London and his mother in Australia), with a tiny group of friends, some of whom are still using, and has only his busking in the Covent Garden precinct to keep the roof over his head and food on the table. He comes home one night to find an adolescent ginger cat parked on his doorstep. He sidesteps the cat for a few days, but when it doesn't go away, he brings it in and feeds it. Realising the cat isn't well, he takes it to a Blue Cross centre to see a vet, who prescribes medications for an infection and parasites that takes up just about the last of James' available cash.

After a couple of weeks, the cat is much better and James attempts to return him to the streets. The cat refuses to leave. James heads off to catch his bus to Covent Garden for his daily busking routine, and the cat follows. Not wanting to see him killed on the busy roads, James takes him along, riding the bus, then setting up to play, where the cat parks himself on the guitar case. The novelty of the ginger cat calmly staying put in the midst of all the hustle and bustle of busy central London attracts more people than James usually has watching and he has a very good day. He gives in far enough to call the cat Bob. Bit by bit, he comes to realise that Bob isn't going anywhere, and neither does he want Bob to leave.

When his busking is curtailed, he moves on and becomes a Big Issue seller. He is still haunted by his demons, and when faced by adversity, realises he's still making some poor decisions. Bob becomes a huge motivating factor, helping James make the big choice to come off methadone, and take the next step to being completely clean.

This is a short and easy read, and James doesn't pull his punches. In a fairly economical style, he paints a picture of his life on the streets addicted to heroin, and touching on some of the petty crime he committed to feed his habit. The realisation that having the responsibility for something other than himself is an epiphany that opens his eyes to the possibility of real change. Along the way, Bob becomes well known. Initially, while James is still busking they have their regulars who pop up and drop money in the guitar case and leave gifts for Bob. Later, selling The Big Issue, the same thing happens, even when they have to move to a different area after trouble from some of the other sellers due to what they see as James' unfair advantage, because of the attention Bob attracts. Bob becomes famous via YouTube videos, something James finds out from a group of Spanish tourists who recognise them selling magazines near the Angel Islington.

Even if you find animal stories a bit cringe-worthy, give this one a go. It's written in a refreshingly breezy style. There's no mawkish sentiment. It's just a very simple, lovely story about a man and his cat making a go of it on the streets of London.

You can see one of the short films about them here:
http://www.youtube.com/watch?v=Vl2nBSqpsRA
Posted by Kaz at 07:16 No comments: