Dorita Fairlie Bruce (1885-1970) was one of the 'big three' of English girl's literature - the other two being Elsie J. Oxenham of The Abbey Girls series and Elinor Brent-Dyer, who write the Chalet School books. You can read my recent post about the Abbey books here. I read the odd Chalet book during high school, but never really got into them, and I've never collected them.

The Abbey books, while fitting into the English girl's boarding school genre, aren't dominated by the school itself as much as the community of girls who meet there and form the central group of characters. Bruce's Dimsie books are all, bar the final story, based in the school, The Jane Willard, which is based on Bruce's own school, Clarence House. It gives the books a completely different feel - we get to know the girls completely within the school environment, and it is their relationships with each other that are the focus rather than their places within their families, who are, with the exception of those who have sisters and cousins at the school, largely peripheral.

We meet Dimsie - a diminutive made up of the initials of her name, Daphne Isabel Maitland, used so as not to confuse her with her cousin Daphne who is also at the school - when she first goes to Jane's. She bonds with a group of girls who become her boon companions and something of a force at the school from their earliest days when they stand up against a plot against Daphne in the face of the whole school. In the second book of the series, they form the 'Anti-Soppist League' - a secret society they feel moved to create when they are moved up a form into a group of girls who are prone to crushes on mistresses and senior girls, pronounced to be, by Erica Innes, the forceful leader of the group, soppy. The others, Jean Gordon, Pamela Hughes, Mabs Hunter and Rosamund Garth, fall in willingly, initially, but it is dreamy, easily influenced Rosamund who gets caught up in a web of petty revenge being enacted by a nasty senior, Nita Tomlinson. All comes out in the end as, regardless of her sometimes unorthodox methods, Dimsie has a knack for managing people and situations - involving girls and teachers alike - and this one is no different, earning her, in the end, even the dastardly Nita's grudging respect. 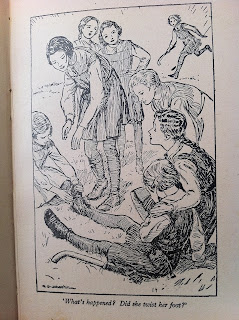 Moving through the series as the girls move up through the grades, Rosamund's young niece, Hilary, arrives at the school with tumultuous effect, being a much indulged young lady who has garnered her knowledge of boarding schools almost entirely from boy's adventure stories. Out of control at home, and totally beyond Rosamund at school, Dimsie takes her on. She cracks Hilary by coming to understand that if the child is forbidden something absolutely, she won't do it, not that it stops her finding plenty of pranks that no one would have considered needing to forbid! But Hilary also has a strong sense of honour and fair play, which is what eventually comes to be Dimsies strongest avenue of appeal.

Dimsie makes prefect, along with the other Anti-Soppists, and eventually, when Erica has left school and Jean, as senior prefect stepping up automatically to take her place as head girl fails miserably, is appointed head girl by Miss Yorke, the headmistress. Mabs has also left school, so the original group are down to four, and have two other girls from outside their circle as fellow prefects - neither of whom are particularly congenial or much respected by the body of the school. Undercurrents that began under Jean's haphazard rule start to surface and Dimsie is faced with some enormous challenges. As usual, via some less than conventional methods, she gets to the bottom of them - from the strike against the two dis-favoured prefects to Hilary and Co's. nursery for stray animals hidden in the secret passageways of the school, transgressing the no pets rule! 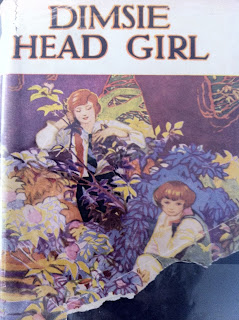 Eventually, Dimsie grows up and leaves school, becoming engaged to Peter Gilmore, and planning, in the wake of the death of her father, to take over the old family home in Scotland and begin a commercial herb garden. However, Miss Yorke has not been well. Dimsie's set all having left school, the overall tone has lowered, and Miss Yorke asks her to come back, not as a mistress, but as an Old Girl, to both pick up some secretarial requirements and perhaps find a way to reinvigorate the old spirit of the school. This is where the changing influences of modernity start to creep into the old style of the school. There are social forces afoot, illicit makeup is being experimented with, banned card games are being played behind closed doors, and worse... Hilary is now a senior, and while she retains all the admiration she had as a child for Dimsie, she's not inclined to 'barge in' as was Dimsie's wont. So, where she might have been the leader Dimsie once was, she isn't, which Dimsie soon discovers. Complicating matters is another precocious new girl, Lintie Gordon, Jean's niece, who Dimsie brings with her to begin school. Accompanying Lintie is the inimitable Jeems...a feisty West Highland White terrior, who quickly becomes the terror of the school. Clashes between the junior school and their all too healthy mischief and the indolent, disinterested seniors are inevitable, and Dimsie is caught in a nether world of having no actual position to fall back upon. Her strength of character prevails, and eventually the tangles are untangled, the juniors reinstate the Anti-Soppist League, and all settles again.

The last book is set in Scotland some years later when Dimsie is married to Peter (invalided in WWI and working as the local doctor) with two small children and WWII is in progress. Lintie - now a senior at Jane's - makes a brief appearance, as do Erica and Pam, also married and living not far away, while Jean, now a published poet is a little further off in Edinburgh. It is Dimsie's young assistant, Anne, and her boon companion, Primula, who get caught up into a spy drama that is linked to a nearby secret submarine base. This book has quite a different feel to the rest of the series, but it's great fun to have the glimpses of the girls all grown up.

Bruce wrote two other school series with different settings, and there are cross overs. I have a couple of the Springdale books - I've been hunting for the rest for years to no avail - and Dimsie appears on the fringes of those, as the school is set in Scotland so there are various social links that come into play.

It is widely thought that many of the adventures and incidents that make up the school based stories were taken directly from Bruce's own schooldays, and they are such marvelously wholesome stories that have a timeless quality that make them immensely appealing even now. It's books like these that made me wish I'd got to go to boarding school, in fact - something my mother considered for me for high school but decided against, not having ever actually consulted me!

While many of the more common Abbey books are still readily available, Dorita Fairlie Bruce's smaller output are very hard to find. It took me years to acquire the full set of Dimsie books, and I still remember the absolutely spine tingling thrill of coming across the last of them - Dimsie Intervenes - which was published out of reading order, and is the rarest of them. I'd been told with utter confidence by a member of a book group I was involved with that I'd never get it, and even if I could find one, I'd have to pay and absolute fortune for it...and there it was, on the shelf of a Salvation Army thrift shop in Port Fairy one summer for the grand sum of $2.00!! THAT was a good day. The black and white illustration in this post is from that book. For lovers of vintage girl's fiction, these are gems; just as priceless and rare, but SO worth the hunt.
Posted by Kaz at 22:26