Tiny Books #7 - The World According to Lucy

After a long hiatus, I'm back, and vowing (hoping) to get back on top of regular posting. Sometimes it's important to take a break, and while this one was most definitely not planned and, also, overlong, I am feeling itchy about writing about what I'm reading again, so hopefully getting back on track won't be a big chore. Interestingly, I'm quite aware that the core of book bloggers I got to know when I started this one have also not been blogging much, so perhaps there is only so long any of us can keep going before we need to stop and do something else. I have been writing, and for those who are interested and perhaps haven't seen my other blog, you can hop over to The Original Dragon Mother for some quite different reading.

Along with The Owl and the Pussycat, this book, The World According to Lucy, was at the back of my mind when I started the Tiny Books project. It was a gift from my mother when I was quite small, and unlike The Owl and the Pussycat, has survived the many, many moves (including our most recent interstate move some two and a bit months ago) without going AWOL for too long, although it took this recent move for it to resurface! 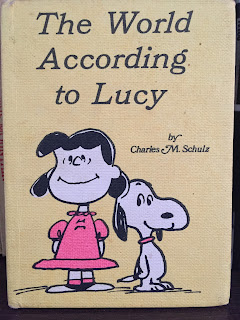 It is a cloth covered hardcover, 10cm x 13.5cm, published by Hallmark Cards in 1971 - clearly part of a gift range. It contains a series of four frame strips, one to a page, that cover Lucy's position on a number of different issues, bringing into play many of Charles Schulz's other beloved Peanuts characters. 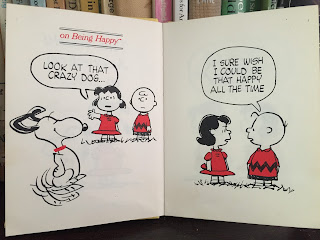 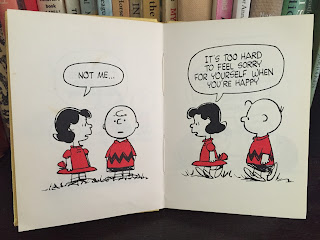 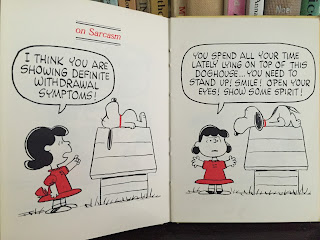 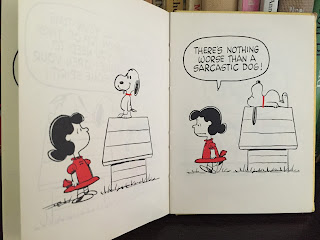 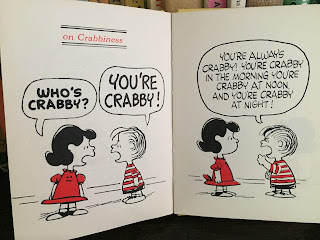 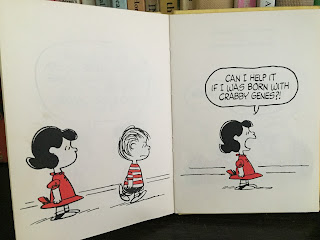 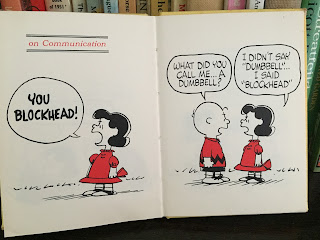 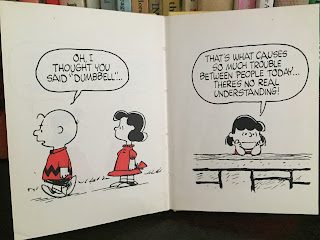 Lucy has always been my favourite of the Peanuts crew. Perhaps because she's not afraid to speak her mind, no matter how unpopular that might make her. She's been a somewhat controversial figure, I think, because she certainly wasn't what was considered the role model for girls when I was growing up. She's argumentative, opinionated, and loud with it!
Despite often being treated quite badly by Lucy, Charlie Brown, Shroeder and Linus keep coming back for more, which always suggested to me a level of regard they had for her - maybe they're drawn to her strength, as none of them are particularly strong characters. Her forthrightness appears to always slide off Snoopy's back, however.

I loved Peanuts as a kid, and I still enjoy it now, although it doesn't appear as regularly in the papers as it once did. Twenty had never heard of it - he went completely blank when I made a comment once that was based on a Peanuts strip. There's a level of daily ordinariness and innocence that is the core of Schulz's gang of neighbourhood kids (and dog) that is quite lacking in more contemporary cartoons, which are largely based in the realm of fantasy and superhero genres.  That it was, and is, read in comic strip form rather than animation - although there have been various animated specials, and the Peanuts movie from 2015, I didn't like any of them - seems to have removed it from the sphere of today's average kid.

The world was a simpler place when Schulz started drawing Peanuts, and that is very much reflected in the strip, and this book. Was it a better place? Maybe, in some respects. As a self-confessed old-fashioned type, the appeal of Peanuts is timeless - even if today's kids are out of step with that very timelessness and fail to enjoy Schulz's celebration of the mundane!
Posted by Kaz at 19:30 4 comments: