Steampunk adventure on the buses

My commute is very short. There's a short hop on the bus for, I think, five stops to get to the local train station, followed by three stops on the train before I reach my stop in the city. Some time ago, I wrote about the issues of short commutes and satisfying the book junkie cravings - you can read that post here. That was back in January, and would you believe, I still had Virginia Woolf's A Room of One's Own in my bag til just recently?! Still not quite finished... In theory, my commute is now actually longer than it used to be when I caught the ferry, but, as well as reading, I'm trying to cram in some knitting, so I need to allocated time for both. I can't knit on the bus, but I can read - don't ask...!

Anyway, anyone who reads here regularly and includes the comments in their reading time may recall some strenuous encouragement I've had over quite some time from a fellow blogger to read his stories. He has a whole series he's been writing that sit under the collective title of Beyond the Rails. He's hassled me gently for months to have a look at them. For one reason and another - partly the fear factor of reading them and possibly not liking them, then not knowing what to say to him... - it's taken me ages, BUT...I finally got myself organised and printed off the first one, The Botanist, took Virginia Woolf out of my bag (poor Virginia, she's a tad battered after all this time) and shoved Jack Tyler, on A4 printer paper, in instead. We had a rather amusing email conversation where I had to spell out my commute time and lack of other time, hence reading this short story in installments... He was also more than a little disconcerted by the idea of having displaced Virginia Woolf - the single line query in his email spoke volumes!

Folks, this is a seriously good fun bit of rollicking story-telling. I sat on the bus the first morning clutching my fistful of papers, looking as if I was reading work papers, except that people on buses at uncivilised hours of the morning don't read work papers chuckling all the way through them - I got some very odd looks. Jack has a gift for great, pacy dialogue. His characters are well drawn and convincing. He paints a highly evocative word picture of the bustling confusion of Mombasa, where the freshly minted botanist of the title, one Nicholas Ellsworth, Dr, arrives with the intention of heading up-country to sample and record the flora of the unexplored and wild regions 'beyond the rails' - the end of the train line. He is informed at his hotel that getting to the locations he's dreamed of is no easy feat, nor a very sensible plan... He's not having any of that, however, and insists he must go. He finds himself, rather the worse for wear - and makes an ass of himself as a consequence - making the acquaintance of one Patience Hobbs, airship pilot extraordinaire, and one of a motley crew who ferry freight and passengers into the interior. The description of Ellsworth's awakening in the airship the next morning with a full-blown hangover is hilarious.

I'm not going to write any more potential spoilers. What I want you all to do is take a wander across to one of two sites: Jack's Hideout, where you'll find Jack's general purpose site with his blog, other stories, these ones, and other bits and pieces that he adds to as the fancy takes him, and, his new site that's dedicated to Beyond the Rails. Follow the links and enjoy! Seriously - go on...and I take my tone from the man himself, who is given to clearly forceful, but kindly, directness!

In addition to Jack's stories, I wanted to include this delightful drawing I stumbled across while I was whiling away what should have been serious work writing time (my brain was fried...) by surfing the net for steampunk images: 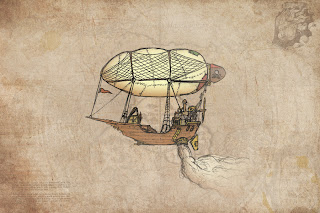 You can go look at this guy's work via this link:
http://van-oost.deviantart.com/art/A-little-steampunk-airship-146031553