On NOT reading Fifty Shades of Grey

As part of my preliminary thoughts on reading The Hunger Games, I made the point that I am somewhat allergic to lots of hype (see here) - whether it's about a book, a movie, whatever... One of my regular followers, The Novelist, posted a query on my Facebook wall some time back asking if I was going to read Fifty Shades of Grey, and before I could respond, another of my blog groupies, The Teacher, bounced in with the comment that it would make so much 'fodder' for my blog. At that point, and don't ask me how I managed this because I couldn't tell you, I hadn't even heard of the book. A quick dive into a bit of Internet research and I emerged to reply to them both that it was most unlikely, with my limited time to read and write about my reading, that I would add this book to the TBR pile.

However, it didn't end there... DB and Sixteen do tend to get caught up by hype about certain things - witness the ongoing viewing of the numerous television singing contests at our house... So, I suppose it was inevitable that at some point, the subject of Fifty Shades of Grey should surface. The trigger wasn't the book itself, as DB hasn't read it, although I just found out Sixteen has (more about that in a minute) and I would assume that there could be a number of Sixteen's girlfriend's cronies who've smuggled it into their current reading matter - that, based on a recent blog post I read by someone going to buy it who had to reach through the crowd of blushing, giggling adolescent girls to get her hands on a copy...yet another example of my one of my previous soapboxes - do you know what your children are reading/watching/playing?

Anyway, the conversation with DB and Sixteen started when something flashed past on the TV about it, I think, and DB, always impressed by a big monetary success, waxed lyrical about how many copies had been sold and what that meant for the author, etc, in terms of it being a literary success. Interestingly, Sixteen unexpectedly agreed with me when I said that just because a book had sold millions of copies, it wasn't necessarily a literary success. It's certainly a commercial success, and E.L. James will never have to write any more than this trilogy (and from some of the reviews and commentaries I've read, I'd have to say it's to be hoped that she won't) in order to bolster her financial security.

DB says Sixteen read it because he "wanted to see what all the hype was about"... Sixteen also said I'd be horrified because it was so very badly written. But, it bolsters my case for the marketing and Internet sensation these books have become. The Novelist says she's going to read it to check out the sex scenes because she's writing a novel and wants to see how someone else writes a sex scene. The Teacher read the whole trilogy and said she couldn't put them down but wanted to... And then today, another friend on Facebook, lets call her Young Writer, put up a post saying, 'Hi my name is ... and I have a problem with 50 Shades of Grey/bullshit and the people who read it. Don't hate me. You don't need a "sexy book" to feel good...' A fellow blogger - you know who you are - read and blogged about this book recently and was hugely amused at my comments after his initial post.

And then - which is why I caved to write this blog post - I came across a review of the book in Southern Cross, the monthly magazine of the Anglican Diocese of Sydney. It never ceases to amaze me, the books and films that get reviewed in this mag - although, there's a certain logic in a deeply conservative diocese pushing particular views of elements of popular culture. The writer of the review acknowledged the hype at the beginning of her piece, and then said it became obvious that it had to be the airport book, as she was heading off on a longish flight - the mind boggles at the thought of a planeload of people all reading this book at the same time... Again, I read a commentary on the quality, or lack thereof, of the writing. Given the forum, there was also a significant portion of the review that spoke to Christian values and the overt subversion of anything healthy and realistic about the relationship between the main protagonists.

Have I read this book yet? No. Am I going to? No. Why not? Because, beyond the hype, enough commentary that I respect - including the blogger I mentioned, who spoke also of the poor writing - has reinforced the fact that I don't want to spend money on trash. I don't have time to read badly written books. And I also don't need this sort of shallow, gratuitous over-developed fan fiction on my bookshelves. When I think how many really good writers are struggling to get their work out there, I don't want to support bad work.

And, an end note to my Hunger Games experience... My regular readers will recall that I made a similarly vehement statement about not wanting to see the movie after my reading of all three books in the trilogy. Just recently, DB downloaded it to watch at home, coming to let me know it was about to start so I could join he and Sixteen. He was somewhat taken aback by my instant refusal and I was equally taken aback by both of them clearly not having taken me seriously when I said I didn't want to see it...many times. About halfway through they took a break, and I went out to make more tea... DB was clearly quite shaken and his quote, which says it all was: "I don't know how you read these books, this is really messed up."

At the end of the day...do we have to read stuff, or go to see movies, just because 'everyone else is?' My grown up self says, of course not. I do remember the pressures of a younger age when doing what everyone else does was what kept you in a group, and that felt more important than suffering through whatever the current thing was. However, these days, given the level of so many of the hyped up things that are having so much collective power, I'm becoming an advocate of rugged individualism! Wouldn't it be a great thing to see the growth of a cult of eccentricity among our young people that allowed for them to follow whatever interests they had and for their peers to celebrate that individuality? Just a thought... 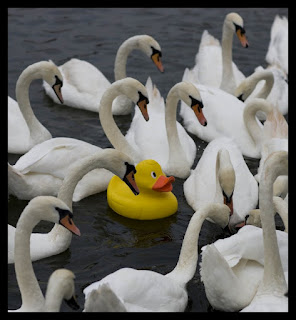