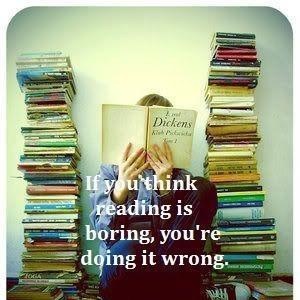 A little while back I posted a photo I'd scavenged from a Facebook post of a bookcase built to look like Dr Who's tardis. You can have a look at it HERE. I didn't mention, at the time, the chat that happened on Facebook in relation to the image. It wasn't relevant to my post, but a couple of things have happened since, and it's niggling me now. One bright spark - who protested after he'd been slammed by a number of others that he was only having a go... - said something along the lines of it being such a shame it was filled with 'boring books' instead of windows to other worlds and times. I will leave the various responses that prompted to your imaginations...

It comes to mind because I'm struggling at the moment with one of my students. I am blessed (!) with a bunch of sixteen year old boys who are all doing year 11 English, and are poised to transition into their final year of school. It means that they're in the throes of discovering that there are some very different expectations when it comes to dealing with texts. For starters, the books they're reading have a lot more substance than previously experienced. They're getting more than one book simultaneously for the purpose of comparative analysis. They're being required to annotate what they're reading. Soon, they will be given the text for their first major topic - 'Belonging' and the text is Romulus, My Father by Raimond Gaita - and they're going to have source their own related texts - at least two, and one must be a medium other than a novel.

The student in question, so his mother tells me, used to be a bookworm. Everywhere she went, she had a small boy attached with his nose in a book. So far, in my time with him, he hasn't completed reading a single book he's been given for English. He's scraping through, using other people's notes, cheats obtained on line, and an attitude that says as long as he passes it doesn't matter how well he does. It's frustrating, because he's a bright boy. It's not even, so far, as if the books themselves have been particularly onerous - most recently, they had George Orwell's Animal Farm. I suggested, to try and pique his interest and give him a fairly straightforward bit of comparative literature, that he have a look at William Golding's Lord of the Flies. This was just prior to three weeks of holidays. Both are short books. He had to read Animal Farm. He didn't have to read the other one. He didn't even bother to get the copy of Lord of the Flies out of the family bookcase. And he still hasn't finished the Orwell, and won't now, because the topic is over.

He says it's boring. All of it. I asked him - reasonably enough, I thought - what happened to turn such an avid bookworm into this apathetic can't be bothered creature. He grinned - he has great charm, the ratbag - and said, "Gym, and girls."

DB says I should give him up, that I'm not doing him any favours nursing him through. I'm not doing his work for him - that isn't going to happen, regardless of what he thinks are clever strategies to trap me into it... The part of me that is stretched too far as it is agrees with DB. Why waste my time, which is in short supply, in a situation that is so frustrating, where I'm not being met even close to halfway? It doesn't pay well enough to make it worth sticking it out just for the money and, in any case, I can't take his parents' money if there's no progress being made. On the other hand, I look at him, like so many of the current generation - being dubbed, in a variety of media, 'The I Generation', or as one witty type wrote it, iGeneration... - waiting for it all to just drop out of the sky and happen for him. He had an exam recently on Animal Farm. He was so affronted by the prep sheet he was given, which reminded them of the need to have read the text carefully and to have made comprehensive notes. There was a second text, a doco on a rock star, Strummer, the topic for the exam was 'Rebellion' and the brief said to prep for the possibility of either an essay, an opinion piece, a conversation or an interview as the genre with which to respond to a question on issues of rebellion in both texts.

Needless to say, with typical Gen I why should I attitude, he kept asking why it had to be like this. Why couldn't they just ask a straightforward question? Why couldn't they say what the exam was going to be? Why was it so hard? As I pointed out, his teachers were doing something very helpful by offering them, before it really mattered for the HSC, a taste of how HSC exams worked, so they could see for themselves that being asked to read a certain way, annotate and absorb more than just the words in a text, was for a reason. It isn't because the teachers just want to make them do work they don't want to do, it's because if they don't learn to do it this way, come the real exams, they'll have no idea what's hit them.

At bottom, I think that one of the issues for him is that it takes time to read, whether it's for pleasure of study purposes. It's not that he doesn't have time - his timetable is geared to allow for necessary reading. It's more that he, along with so many of his peers, doesn't consider it a worthy use of his valuable time... But, you have to wonder what's going to happen when they hit the real world where their time is no longer their own...
Posted by Kaz at 14:58