I made a discovery just recently - one of those serendipitous moments, generated this time on Facebook. It's scary really, how many random facts come via this site, although, not really unexpected. Anyway, a friend of mine uploaded a YouTube video of The Cure singing Charlotte Sometimes, which, up until that point, I only knew as the children's book I'd loved in primary school and then hunted for relentlessly as an adult until I found me a copy in Puffin - exactly the same as the school library copy!

I just listened to the video clip. Apparently, the members of The Cure were very literary types and this isn't their only song based on a book. However, listening hard, I found it difficult, as I'd said in the chat that followed my friend's post, to marry the book and the song... 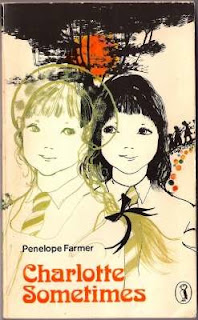 I wrote just recently about my children's literature shelves not containing much in the way of fantasy. They do, however, carry a number of books based on time slip themes - does that count as fantasy? I love the idea of slipping through whatever gateways or portals there may or may not be to inhabit, however briefly, a different time. Penelope Farmer's Charlotte Sometimes is a delicately crafted story. It centres around Charlotte Makepeace, newly come to boarding school, who goes to sleep in her old, iron bed in a five bed dormitory, exhausted after the confusion of First Day, and wakes up in the same bed, but nothing is the same - not the people, the clothes, the food, the subjects, nothing...

Her confusion is, of course, enormous. Her 'little sister' Emily thinks she - 'Clare' - is having an unusually slow day. She muddles through, allowing the extroverted Emily answer all the 'new girls' questions that are fired at them from all directions and collapses into bed, only to wake up the next morning back in her own time. The next night, the same thing happens, and to clarify for herself what's going on, she opens the book by her bed - 'Clare Moby PRIVATE' - clearly a diary, a diary dated 1918. A day later, in her own time, she finds another notebook - Clare has written to her, having worked out that there's clearly something very odd about the bed they share, suggesting that they keep each other up to date via the books - Charlotte is to write in Clare's diary - and that Emily not be told. That's all very well, except that Emily, a sharp child, has woken up to the fact that there's something odd going on, and challenges Charlotte who, without Clare actually there to back her up, tells.

The night and night about continues. Charlotte suffers no matter where she is - in her own time there are subjects she's good at and others she's not, but she and Clare aren't the same, so she's constantly in trouble for work not done, and in her own time her piano teacher can't understand why one day she struggles with her scales (Charlotte) and the next, she can play her pieces easily (Clare). However, it is soon to come to an end. The room Clare and Emily occupy in the school in 1918 is in the hospital wing, and they're there because there is no room for more boarders, and they are soon to move to lodgings. The girls work out that the nights will fall out all right, and they will end up in their own time. Charlotte though, has been haunted by the experience, wondering how it is no one has noticed. She quizzes Emily, who tells her that she and Clare aren't so alike really, but that, in the end, she wonders if it's because she's never really looked at either Clare or Charlotte properly.

Perhaps we never look at people properly, Charlotte thought. ... And, she thought uncomfortably, what would happen if people did not recognize you? Would you know who you were yourself? If tomorrow they started to call her Vanessa or Janet or Elisabeth, would she know how to be, how to feel like, Charlotte? Were you some particular person only because people recognized you as that?

I think this is one of the passages that haunted me all those years, and it's one that always comes up off the page and smacks me between the eyes when I re-read the book. This is a children's book, written in an era when children were still children...

To continue... Disaster strikes. Charlotte goes to bed on her last night in 1918, very sad that she won't see Emily again. She wakes in her own time and realises she'll have to come to grips properly with things because she won't be travelling any more. After a normally bewildering day, she goes to bed, comforted to some degree by knowing that the confusion will now lessen. And wakes up. And it's 1918. And Emily tells her ...'in a small, flat voice, "We didn't go into lodgings yesterday after all. We're going today."' Charlotte is stuck in 1918 and Clare is on her own forty years in the future.

They are moved to the house of the Chisel Browns...Mr and Mrs, and Miss Agnes Chisel Brown. The hope of the family, Arthur, was killed in France, where the girls' father is currently serving in the War. This is where the daily horrors of WWI really come home in the book. At school, there is a certain level of buffering, but living as day girls, the girls see the victory gardens, experience the food shortages differently, live with a family in mourning for their only son, and see the wounded soldiers returning at the railway station.

Charlotte becomes increasingly lost in being Clare, reminded eventually by Emily that something has to be done, sometime, to make the swap back. They have an eerie night adventure, making their way to the school after everyone in the house has gone to sleep to see if Charlotte can get in to sleep in the bed. She does, but the influenza epidemic has begun and there is someone in the bed. Eventually, when the Chisel Browns decide to hold a seance, and the girls are discovered hiding in the window when Clare puts in an appearance, the girls are banished back to school. Emily catches flu and ends up in the hospital wing, and sends a note to Charlotte to tell her the bed is empty and to 'come.' Charlotte, after lights out, makes her way there, crawls into the bed, still in Clare's dressing gown, falls asleep eventually, and wakes up, finally, back in her own time.

This is an exquisite little book. There is much, much more than I can include in a review here. I don't know how easy it might be to get your hands on, but if your interest is piqued, have a go. It is beautifully crafted. The writing is excellent. The complexities of the emotional journey Charlotte travels are delicately handled, but realistically so. Her sense of loss in both times is clearly voiced, as are the difficulties she has with various relationships in both times. Her sense of who she is, and the struggle she has to hold onto that, is beautifully realised. If you like time slip stories, you can't not read this one, because it is class all the way.
Posted by Kaz at 01:51