There are times that comfort reading is an absolute must - when life gets too hectic, when you need nurturing, when you don't want to think, and when you're ill. The last few months, I've been dealing with the latter of these and my previous busy, very highly thought provoking reading hit a huge nose-dive because due to the nature of the illness, and the drugs I'm now adjusting to taking, I've just not had the mental focus to deal with anything that requires too much energy. So, a recent orgy of vintage English girl's literature - deliberately gendered, given it comes from a period when kid's literature was largely gendered. 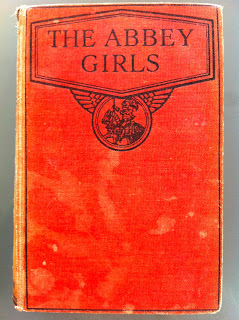 Elsie Jeanette Dunkley wrote under the pen name of Elsie J. Oxenham - borrowing the surname from her father, who wrote as John Oxenham. She was born in 1880 and lived most of the first half of her life in West London, moving later to Sussex. In London, she got involved with the revival of English folk dancing, one of many taking part in official classes and holiday schools that happened as the movement gained momentum and became more formally organised. She was also involved in Camp Fire - a girl's movement that shared some commonalities with Girl Guides, but which had slightly different base values and utilised much more pageantry than guiding.

The Abbey series - almost 40 of her 87 published books - follow a group of girls from their mid teens until their daughters are about the same ages. Set 'between the wars' - WWI gets light mentions in a few of the early books, but isn't really a presence - in mostly country England, the stories centre around the Shirley girls, Joan and Joy, who we first meet in The Abbey Girls, which is actually the second of the series - the first being Girls of the Hamlet Club. Joan and Joy, with Joan's mother, are living in the little rooms in what is mostly ruins of an old Cistercian Abbey in the Buckinghamshire country house - modeled on Cleeve Abbey in Somerset. The girls' fathers were twins and are both dead, as is Joy's mother. They meet the girls of the Hamlet Club from the big school in Wycombe, the nearest sizeable town, when the Hamlet Club girls visit the Abbey one weekend on an excursion.

Cicely and Miriam, the two leaders of the Hamlets, the former being the president - a title that stays with her throughout the series despite other presidents coming and going - are surprised to be guided by Joan, a girl their age, having expected an adult guide. Bit by bit over the course of the story, Joan and Joy's background is revealed, including joy's relationship with the owner of the Abbey and the nearby 'big house'. By the end of the book, they and Joan's mother are resident in the house, old Mr Abinger - Joy's grandfather - having left his house to Joy and the Abbey to Joan. Meanwhile, through the Hamlet Club, first Joy and then Joan are able to start going to Miss Macey's school at Wycombe with Cicely and Miriam, and join the Hamlet Club.
The Club, with its foundation in social equity - formed in the first book to counteract a social division in the school between the town girls and those who live in the surrounding hamlets, with its motto borrowed from Shakespeare, 'To be or not to be', forms the core of the narrative across all the books. It is the Hamlets that start folk dancing at the school, and the annual crowning of a May Queen - and in that first year of Joy's at the school, she is crowned Queen; as the new girl, she can't be expected to have any strong allegiances to the divided school. Later Joan, too, is crowned, leading a long line of Queens to come from the Abbey as the series goes on.

Oxenham introduces herself via several characters - the 'Writing Person', who we meet in London in a few of the 'town' based books, and later in the character of Mary-Dorothy Devine who we first meet in the London books, but who becomes a fixture at Abinger Hall when Joy, as an adult, needs a private secretary. Other characters are based on real people Oxenham got to know through folk dancing - 'Madam' and 'the Pixie' were based on people within the official organisation. The much loved figure of 'Jenny-Wren', AKA Jen (Janet) Robins, who comes to the Wycome school from Yorkshire, and is adopted by the Abbey girls, becoming Joan's maid of honour when Joan is crowned, and later, Joy's sister in law when they marry, is based on another friend of Oxenham's.

Oxenham was a Protestant, her family being Congregationalists (for Aussie readers, one of the three Protestant groups who merged to form the Uniting Church, the others being Methodist and Presbyterian), and this informs many of the values that run through the books. While essentially being books for young girls, there is a moral imperative in Oxenham's writing, and various characters, when faced with difficult choices or life experiences, end up puzzling their way through the greater mysteries of life and faith in various one on one conversations. Mary-Dorothy comes into many of these. She's an interesting character - discovered by Jen at age 30, working in an office, and fast losing control of her bright and frustrated much younger 15 year old sister, Biddy. Jen drags her into dancing and gently bullies her into participating into living again...thrusting her into teaching a class of children, carting her, with Biddy, off to the Abbey for visits - showing her that life has many more possibilities than she thought, and encouraging her to grasp it and follow her dream of writing. Coming to this richness later in life, Mary finds herself questioning many things, and her responses to what she experiences are a marked contrast to those of the younger girls. 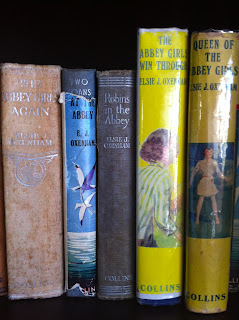 I do love these books. I have about half of the series - a few precious early Collins editions, lots of later more modern Collins reprints, and a couple of more recently re-published paperbacks (the latter by a publishing company in the UK - Girls Gone By - who have been working on re-publishing many of these vintage writers who have long been out of print). They are exactly what they set out to be - wholesome stories about girls and their concerns of the time - modern teens might find them laughable, but I'm old enough to remember my great aunts (I never knew my grandmothers). These are their books, and they are portraits of that era... 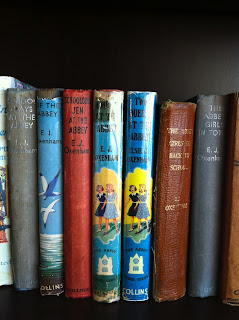 Interestingly, there are societies all around the world based on this particular series - I belonged to the South Australian chapter of the Abbey Girls of Australia. I never join groups - ever.... The online community I'm creating via this blog is the closest thing I've come to a group in ages! I did join the Abbeys in Adelaide - amazing group of women. Monthly meetings were spent eating lunch/extended afternoon tea (the egg sandwiches, with many variations, were legendary), discussing the books - sometimes as a structured discussion with a particular theme, sometimes less formally. All of us collected the Abbey books, and then there were the rest of our collections. Then there were the reasons that people collect - which I found endlessly fascinating. I'm sure there's a post-grad sociology thesis in there somewhere, if it's not been done already. There were people who collected because they'd become obsessed with collecting - and they collected anything and everything that was vintage and kid's lit. Others collected as many editions of the same books as they could lay their hands on. Then there was one woman who collected them for the dust jackets - she wouldn't buy a book without a dust jacket. I became very close with a woman who had a collection that was most like mine - she'd been a school librarian forever so she, like me, also had a large collection of more contemporary kid's lit - well, contemporary to my generation and that of my boys'! She obtained for me - she was also a dealer - the copy of The Far Distant Oxus, which I wrote about in this post. She also, like me, had a huge number of books by authors who were part of a golden era of Australian kid's lit - like Eleanor Spence and H.E. Brinsmeade.

I read, as regular followers of this blog know well, a highly eclectic range of things. Basically, if it has print, I'll read it - once at least! There are some things that I come back to for particular reasons. I love Elsie J. Oxenham's Abbey books because they're safe. They speak of a bygone era when things were simpler; of a time when our roles as men and women were more clearly defined. They have been the subject, along with other books in this genre, of enormous amounts of feminist research - people have written PhD theses just on these books!! They do provide much fodder for academics.

However, during these past few weeks, they've given me succour, and for that, I'm eternally grateful to these writers. I can't remember the last time I actually read them in order - I don't try and do it often, because then I become all too aware of where I have gaps in the series. I've been dodging around with favourites. I'm just about at the end of this lot...so, perhaps, stay tuned for a similar post on Dorita Fairlie Bruce, because that's where I usually head after Oxenham.
Posted by Kaz at 03:57