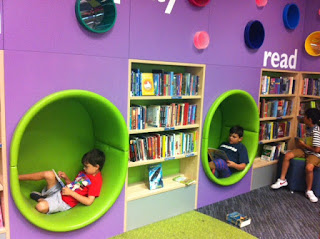 I LOVED the libraries at my schools. They were my sanctuaries. As an awkward, socially inept child, and later an odd teenager with quite different interests to most of the kids around me, they were places I could go during recess and lunch breaks that were largely unpopulated, quiet, and safe. I got to know the librarians - to the extent that, in high school, the librarian kept new books for me before they'd even been processed, knowing I'd already worked my way through the fiction section by midway through year ten.

It was a golden age of school libraries too - lots of classics, lots of what have become classics in the new literature, and as I recall, a dearth of vampires! To this day, there is a significant chunk of my collection of children's literature that has come from decommissioned library books - treasures I've acquired for, at most, a few dollars apiece.

Even when  I got to university, the library was a wondrous place. Again, at times, as I navigated my way around a new, much bigger learning institution, it was a sanctuary - even if some of the tomes on the shelves were a little scarier than the ones in the school libraries.

I found this marvelous selection of images of innovative new school libraries on my Facebook feed and it got me thinking back. I love some of the ideas used in the libraries in the photographs, and I'm particularly tickled by the ones of the two schools in the Bronx in New York - a whole program to redecorate and make enticing the libraries in districts where children are significantly disadvantaged. Hopefully, many of those kids will find sanctuary in them as I did, and who knows, maybe some of them will grow up to have rooms in their houses that are home to so many books that they can, quite legitimately, be called libraries too!

http://www.theguardian.com/teacher-network/gallery/2015/jan/08/school-libraries-world-books-gallery
Posted by Kaz at 23:23 2 comments: