Today is Holocaust Remembrance Day. When I worked as an educator at The Sydney Jewish Museum, we had the daily task of teaching young people about The Holocaust, working with volunteers, many of whom were Holocaust Survivors. The enormity of that task can't be underestimated. The statistics alone, still after so many years, are numbing. Eleven million dead, six million of them Jews - of that six million, none had done anything to warrant their deaths in such a fashion. Their only 'crime' was that they were Jews.

The students we taught came from all over Sydney and beyond, private schools, public schools, Jewish schools, non-Jewish schools. Some were there because they were specifically studying Holocaust history, others because that period in history had application in other areas of their curriculum. Some of the kids had some prior knowledge of the Holocaust, but for many it was their first time coming face to face with information and images outside of  a text book. For nearly all of them, it was their first encounter with anyone who had lived through it. There was one familiar figure though, and at some point we would be asked about her, if we knew of her, and if there was anything of hers in the Museum.

Anne Frank has become one of the symbols of The Holocaust - a young girl who died just before her sixteenth birthday who might, had it not been for the survival and publication of her diary, have died the same anonymous death as so many others. Her diary is one of the books that has been in my bookcase as long as I can remember. I remember with spooky clarity the details of the small bedroom I had in the house my parents bought in Sydney's inner west when I was three and a half. I remember the white painted bookcase - later refurbished when Twenty-Seven needed a bookcase in his room. Anne's diary was in there. I read it for the first time when I was about eight, I think. I've re-read it regularly since. At different times in my life, it's meant different things for me. Like many young girls, Anne's romance with Peter took centre stage. Later, of course, the tragedy of the loss of this young life, among so many others, overlaid all other considerations.

I've never seen any of the film or stage adaptations of the diary, and I don't want to. There was a traveling exhibition that came to Adelaide years ago, and I went to that - there were photographs I hadn't seen, and artifacts I'd only ever read about. I watched a number of different documentaries when they were televised. I was very upset when I found that, despite having time, Twenty-Seven didn't go to Anne Frank House when he holidayed in Amsterdam. I don't think any of this activity was particularly unusual - it is a manifestation of the phenomenon of Anne Frank...

I had the great good fortune, while in that job, to be trained as an Educator at Yad Vashem, the Holocaust Museum in Jerusalem. One of our teachers exhorted us to not even attempt to 'teach six million.' It can't be done. It's simply too great a number to be grasped. She taught us to teach stories of individuals. Consequently, over the nineteen days of the course, we experienced a great number of personal Survivor testimonies, told in a variety of different ways - all the better to show us how first person testimony could be utilised in an educational setting. It was a very tough nineteen days. My nightmares started partway through the first week, and I continue to have flashbacks. I don't know about other people specifically, but I do know that for all of us in the course, it was life-changing.

For me, insulated personally from The Holocaust by six generations of Australian Jewish ancestry, it was chilling to view Nazi propaganda as to the criteria of what made someone a Jew and realise that regardless of the intermarrying within my family, I and my children qualified and, had we been in Europe at that time, would have been candidates for deportation.

And then, one day, a voice from the past - or so it felt. We had spent the day at Yad Vashem, ending up walking through The Valley of the Communities - a monument to all the communities destroyed in The Holocaust - a schematic 'map' carved out of solid rock, naming each and every community regardless of size. It was numbing, it was the end of the day, we were all tired - physically and emotionally. Then a door in a wall opened and we were ushered into a small lecture theatre deep in the mountain where there were two elderly women waiting for us. I am ashamed to say that I don't remember one of them, as the other took all my attention when she opened her testimony with, "My name is Hannah Pisk, and Anne Frank was my best friend."

Hannah told her story, interwoven with Anne's, who she met on the first day she started at the Montessori kindergarten where Anne was also having her first day. Firm friends from that day, they shared a childhood, and then, as Hannah told it, one day, Anne wasn't there any more. Anne had, of course, gone into hiding with her family and the Van Daans. For Hannah, Anne simply vanished without trace. Her narrative went on to describe what happened to her family - along those fortunate enough to be in possession of South American visas, and therefore, given 'special treatment' when they were sent to Westerbork Camp (where large numbers of Dutch Jews spent transit time) and from there to Bergen Belsen. As one of the 'privileged' and early inmates of Belsen, Hannah and her family were housed in relatively solid huts, and were able to carve out some semblance of normal life despite the lack of food and medical care.

There were rumours of incoming prisoners towards what was the end of the war, and on the other side of a screened fence, they soon heard new voices. Then, one day Hannah, walking along the fence, heard two very familiar voices - Anne and Margot Frank, transported to Bergen Belsen from Auschwitz, where they had been sent after the family was betrayed in Holland. For a time, Hannah and her mother threw whatever they could in the way of food and clothes over the fence to the girls. One day, Margot wasn't there - she was ill with typhus. And then, Anne wasn't there, and never came again, succumbing also to the disease.

It was a postscript to Anne's story that I couldn't possibly have anticipated. It is one I told the students who came to the Museum when I was back doing my job as an educator. To this day, I can't tell it without getting goosebumps.

In her, perhaps, most famously quoted passage, Anne wrote:


I want to go on living after my death. And therefore I am grateful to God for giving me this gift...of expressing all that is in me.

The publication of Anne's diary achieved that. So too did Hannah's telling of the part of Anne's story that was also part of her own. Judaism teaches that as long as we remember our dead, they have not completely left us.


Zichrono livracha - may her memory be for a blessing, and the memories of all those who perished in that time. 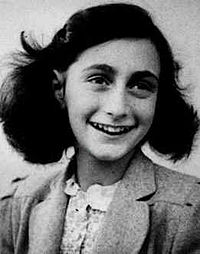