A book for Australia Day

It reminds me of a music history paper I was set in first year at the Elder Conservatorium in Adelaide many moons ago. The topic for the term had been the Romantic Period, and the question for a short, 1500 word essay was: Using a single work, or the work of a single composer, define Romanticism. Define Romanticism using a SINGLE work, or the work of a SINGLE composer....in 1500 words. To my mind, it was quite, absolutely impossible. I mulled it over for a little while, watched my classmates rifling furiously through various texts, and then producing feverishly cramped apologetics - at least that's how it felt to me, because my gut feeling was that it couldn't be done. And it wasn't actually the small word count in the end; it was the limitations imposed by the use of a single work or the work of a single composer, which flew in the face of everything we'd been learning about the melting pot that was Romanticism, where everyone's work informed everyone else's - and not just within music either. Literature informed visual arts, which informed music, and drama, and back again... In the end, using related examples from all the liberal arts, I wrote a paper saying the question couldn't be answered in the form it was asked, and why. My friends were all horrified, and absolutely certain that I'd fail. As it happened, I didn't. I didn't top the class or anything, but I did get a good grade, and more importantly, a fantastic bit of feedback from my lecturer, who was one of the more imposing figures at the Con, saying how refreshing it was to read something that had so much originality.

So, back to the topic...the quintessential Australian book... In amongst the examples that I recall from all the commentary this week was Norman Lindsay's The Magic Pudding, Joan Lindsay's Picnic at Hanging Rock, Tim Winton's Cloud Street, and a few others that are escaping my memory at the moment, but it was an eclectic lineup, as you'd expect. It prompted me to have a look at my bookshelves and see if I could pull a book off them that encapsulated Australian writing - as much as one book can possibly do that. I own The Magic Pudding and Picnic at Hanging Rock - love the latter... I've not yet got around to reading any Winton for one reason or another. A goodly lot of my children's literature collection is by Australian writers - Ethel Turner, H.E. Brinsmead, Margaret Mitchell, Ruth Park and the like. They're classics, and epitomise much of Australian culture - the city and and the bush. However, what I picked up in the end was a poetry anthology I've had since I was very small that I'm almost certain my mother gave me, although, most unusually, there's no inscription. 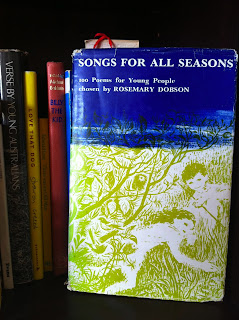 It was first published in 1967. My edition is a 1971 reprint. Although it's branded as a children's anthology, I've dipped in and out of it all my life because it's such a comprehensive collection of Australian poets. There are such classics as Banjo Paterson's The Man From Snowy River and Clancy of the Overflow, Henry Lawson's The Ballad of the Drover and Andy's Gone with Cattle, John O'Brien's cyclic ballad Said Hanrahan - '"We'll all be rooned," said Hanrahan', Dorothea MacKellar's My Country, and Edward Harrington's The Bushrangers. It was also my introduction to Judith Wright, whom I later studied at school for my final year in English, and Kenneth Slessor, a great favourite of my mother's. There are also less well-known treasures like Ray Mathew's One Winter Morning that celebrates that wonderfully, unique magpie song that has to be one of my all time favourite bird calls.

This works for me partly because it's an anthology - there isn't just one voice. Also, poetry is such an evocative form of writing. The shapes of the poems on the pages, and the pictures the words paint speak to me quite differently than prose. I don't sit and read poetry nearly often enough, and leafing through this anthology has recalled a number of treasured memories, including the times that I sat with my own children and we read from this book as my mother sat and read with me.
Posted by Kaz at 21:31