I, Iago by Nicole Galland isn't one of my books; it's a book I gave Seventeen. He and The Student studied Shakespeare's Othello last year for English at school, and Seventeen was really taken by the character of Iago. He wrote a spooky assignment that was a series of diary entries in Iago's voice...which he had down pat! So, when I saw this book in my bookshop travels, I decided it had his name on it. 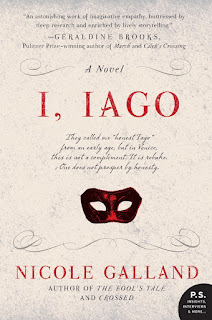 Geraldine Brooks - author of March, The People of the Book and Caleb's Crossing - wrote of this book that it is, "an astonishing work of imaginative empathy, buttressed by deep research and enriched by lively storytelling." Galland has taken Shakespeare's character of Iago and created, with meticulous research into the period, Venice life at the time, and the big picture of Italian politics; a back story to this all important figure in the original play.

We get to have, through her storytelling, an understanding of the young Iago, his position in the family, and how he comes to be - as one of Venice's wealthy merchant class - a soldier in the army. She paints a vivid picture of the genesis of his fierce determination to rise to the top, the motivation - fueled by years of feeling sidelined by his older siblings - to be seen by those with influence as an asset in his own right. We come to a deeper understanding of how that ruthless need to succeed blinds him to the moral compromises he makes in order to gain control over Othello's decision-making, which leads ultimately, to the bloody end game.

It's a tough call, taking a character from an existing and well-known work and running with it to create a new story. To date, those I've read - a number of continuations of Pride and Prejudice by various writers being prime examples that come to mind - haven't convinced me that it's such a good idea. I think I have too much invested in the originals, and while I may wish there were more to come, at the end of the day, I'd rather have them stop leaving me wanting more, than to have the dissatisfaction of reading an attempt to do something that doesn't really work. What marks this book is Galland's research. I've read quite a few novels, and awful lot of historical texts (European art history studies at school, art school and post-grad) about this period, so I have a reasonably good working knowledge of Italy during the Renaissance. There is a solid sense of authenticity in the settings, the manners, the clothes, and the more mundane day to day elements of Venice and surrounds in the period of the story.

Even for those not familiar with Shakepeare's play, this is an enjoyable read. There is romance, drama, intrigue, and surprising moments of farce and comedy. If you do know the play, then it acts as a backdrop to this narrative. For students of the play, I think this can be a useful complimentary text, if only for the colour and detail it can offer in contemporary language, next to Shakespearian English. And for those of you for whom Iago has been a character to revile, you may find it in yourself to have some sneaking sense of sympathy with him, if, at the same time wishing that he had it in him to just accept himself for who he is and abandon all the baggage that eats away at him, prompting his machinations that have such tragic consequences for everyone.
Posted by Kaz at 00:39