The first of my holiday loot... This was a re-read. I was loaned a copy of this book years ago by a friend and gobbled it up in one sitting I think! I've collected the others since, and Faye Kellerman and Kerry Greenwood between them constitute about 99.9% of my crime fiction diet, since it's a genre that doesn't appeal to me overmuch. 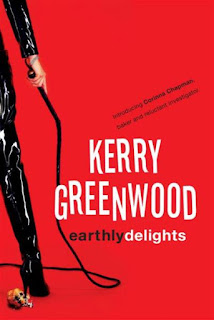 The tagline on the front cover of the book is the first indication that it's not going to be your average piece of crime fiction:

Corinna Chapman is a one-time accountant who left the world of offices and corporate politics (and her equally corporate husband) to become a baker, eventually buying an apartment in an eccentric building modeled on ancient Roman apartments, The Insular, operating her bakery from a ground floor shopfront. The apartments are all named for various Roman deities and house an equally eccentric cast of characters - Meroe, a Wiccan witch who also runs a shop in the building; The Lone Gunmen, a trio of geeks who live in a closed and shuttered world of their computers, bad takeaway food, vodka breezers and their obscure clientele; a retired history professor who bought in so that he could furnish his apartment in authentic Roman style; Dutch Trudy, who maintains the rooftop garden which includes a bower, lawn, fruit trees, herbs and vegetables; Mistress Dread, a dominatrix of dubious gender, who runs a fetish shop in the remaining shopfront; Kylie and Goss, the interchangeable (apart from distinctly different navel rings), anorexic, wannabe actresses who pay their bills by working shop for Corinna; the Greek family who run the cafe on the ground floor; mysterious and inscrutable Jon, who is absent most of the time on exotic trips to the East...; the newly arrived and unknown Mr Halliday; and the Pemberthys, an old couple - he, and ex preacher, seemingly cowed by his fussy and demanding wife whose chief focus of affection is for her overweight and snappy terrier, Traddles.

The building is located near the CBD in the southern Australian city of Melbourne - a city which vied at one point with Sydney to be the nation's capital. The solution, in the end, was Canberra, a planned city halfway between the two, in a specially created territory. But I digress... Melbourne these days is a big international city. It lacks landmarks like the Opera House and the Harbour Bridge which have made Sydney such a well-known place on the international stage, and competition for supremacy between the two cities continues to this day - who has the best food, the best coffee, the best theatre, the best shopping, etc...

Like all big cities, Melbourne has its seedy side, its underbelly, and with her bakery located on the fringes of the city centre, Corinna sees plenty of its less desirable characters. Her routine, which she likes to keep uninterrupted, is to rise at 4am five days a week - she doesn't trade on the weekends - bake her bread, having breakfasted lightly on serial cups of coffee and toast or a croissant in the company of the gracious Horatio, her house cat, prior to descending to the bakery to appraise the overnight catch of The Mouse Police, AKA Heckle and Jekyll - two street cats who have an uneasy relationship with Horatio. Once the shop opens, and the bread is all baked, she can leave the shop in the hands of Goss or Kylie to shower and make herself presentable for the day, and do the business of selling her wares. That done, post clean up and prep for the next morning, she can retire with Horatio to the rooftop garden, an eski stocked with the makings of a good gin and tonic or three, and her book, to either read, snooze, contemplate her dinner options - or all three - with or without the serendipitous company of the other tenants of the building.

This routine is rudely awakened one morning when she opens the bakery's back door to the alley to let The Mouse Police out, and is confronted by the collapsed body of a young junkie who is a deep shade of blue... A panicked flurry of activity later, the ambulance comes, the girl is revived, and Corinna is rescued from her drug induced fury by the sudden arrival of six foot something of male, tall, dark and handsome...who leaves her in a distinctly jellied state on top of the predictable shock. In conversation with Daniel (tall, dark, etc...), the paramedics and the police, she discovers this is not the first young junkie to have OD-ed recently - it seems that someone is killing Melbourne's junkies... And that's not all. Later in the morning, still feeling more than a little jangled, she is confronted in her shop by six foot six of angry, leather-clad Mistress Dread - before whom, almost her entire custom melts away - demanding to know if she knows anything about the graffiti on her - Mistress Dread's - shop wall proclaiming 'WHORE OF BABYLON'... A little more investigation, and the discovery of a hate letter under her own apartment door indicates that someone is stalking the female tenants of The Insular.

From there on, the book is an absolute romp - the action moving swiftly between the bakery (where Corinna takes on, kind of accidentally, another young junkie, Jason, who has a talent for making muffins), the roof gardens and other parts of The Insular, the soup run with Daniel and a whole team who minister to the homeless in the local neighbourhood, and culminates in a dramatic scene in an exclusive inner room of Blood Lines, Mistress Dread's nightclub, where Corinna - corsetted, booted and whip-carrying, leading Daniel on all fours on a leash, stage, with Mistress Dread's help - and a few other players - becomes part of a set up to catch the vampire who has been distributing the pure heroin that has been killing the junkies. Domestically, Corinna and Daniel, with the help of The Lone Gunmen and a curse set by Meroe, narrow down the possible suspects for the terror campaign in the building, unmasking one of their own.

But you'll have to find a copy of the book and read it to find out who it is...

Kerry Greenwood also writes the Phryne Fisher Mystery series - vintage crime fiction set, again, in Melbourne, but in the 1920s. They're fun too, but I love the fresh, contemporary nature of the Corinna Chapman books more. If you haven't stumbled across them yet, do yourself a favour and go get them - and this is coming from someone who doesn't really do crime fiction!!