Call the Midwife - Jennifer Worth

I missed the BBC adaptation of this book when it screened recently on the ABC here. Frustratingly, I kept seeing trailers for it and then for one reason or another, just didn't manage to connect... However, while I still have intentions of getting hold of the DVDs and watching it, it appears that this book and I were destined to come together. It's one of my holiday haul, was on a sale table (always good) and I had to buy it for homework...seriously! Apparently, the subject of my next profile interview at work for the magazine had some involvement with the East End midwives - I don't now precisely what role she played, but I will find out - and let you know once the article is published!!! 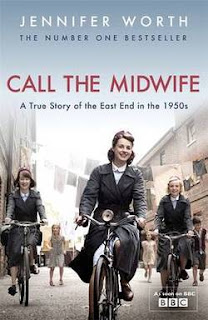 Part historical document and part memoir, this is a great read. Jennifer Worth worked as a midwife in the East End of London in the 1950s, having trained initially as a nurse. Her narrative is a rich fund of facts about the area at the time - the poverty, the overcrowding in the wake of bombing in the docks area during the war, the atrocious conditions in tenements that had been condemned but were still full of residents because there was no alternative housing available, malnutrition, pockets of domestic and other violence, and for most, a lack of opportunity to break the cycle. However, despite these and other challenges, she also chronicles close extended family networks, strong moral codes, a solid work ethic and utter respect for those, like the midwives, who lived and worked among the people.

Structurally, the book works in layers - Worth's own story is the thread running throughout, peppered with anecdotes about the nuns with whom she lived and worked, the other midwives, snippets of her social life, and her patients and their families. Both elements inform each other. At the beginning, Worth is quite candid about never having planned to become a midwife - or even a nurse, for that matter. She is highly skeptical of anyone living the religious life and approaches becoming a resident in a convent in order to do her training with no small degree of apprehension. She also struggles to find common ground with her patients - who are inherently suspicious of those from outside the community who come to 'do good.' She has to learn to see the nuns as real women, build working relationships and friendships with them and her her colleagues, find time and energy to have some 'normal' time for herself between being on call, ongoing study and being geographically inconveniently placed to easily maintain contact with her friends. She also has to break through her inhibitions about the community in which she's working, gain understanding of the nature of the people, and find ways to connect with them on a personal level so that she can work with them throughout pregnancy, birth and post-natal care periods - all the time giving them the best care and education she can without taking anything away from them in the way of their pride, dignity and self-respect.

Some of the stories of her patients are heart-breaking - Irish Mary, who runs away to London after being raped by her stepfather, is penniless and caught up in prostitution, meets Worth by approaching her asking for change of the five pound note she stole when she ran from the brothel once they discovered she was pregnant - having watched one of the other girls die after an illegal abortion. Worth takes the girl back to the convent and care is arranged for her in a country convent where there are other single pregnant girls. She is safely delivered of a baby girl, and Worth visits her there shortly afterwards, finding her aglow with new motherhood. However, given her age (15), past and her lack of any family to support her, a decision is made that the baby will be adopted out. She's not consulted as she's underage, the baby is simply taken from her. She's found a job as a ward maid in a hospital in Birmingham, and that's the last Worth hears of her - until years later, when a baby-snatching case makes national headlines, and a photograph of the culprit, apprehended attempting to board a ship to Ireland is apprehended...Mary, aged twenty-one, is incarcerated.

Others - like that of Conchita, a Spanish girl rescued by an idealistic East Ender who'd gone to fight in the Spanish Civil War - are beautiful, and heartwarming. He brings her back to London with him, age unknown, and when Worth first meets her to do home-based ante-natal care, she thinks someone's made an error with the paperwork as the case is listed as Conchita's twenty-fourth child... Large families aren't uncommon in the East End, but this is pushing the limits! However, as she discovers, this is in fact the twenty-fourth child due to Conchita and Len Warren. It is, unlike many of the homes she visits, a totally harmonious household. Cluttered, overcrowded and chaotic, but underpinned by great love between all in the family. Everyone, Len included - which is most unusual for a man at that time in that community - takes part in all the necessary domestic work. He is even involved in the ante-natal care and is there during the delivery of the baby - unprecedented at that time, but entirely necessary as Conchita has never learned English. The pregnancy is uneventful, and the baby is a healthy girl - and for everyone, the occasion is a joyous as if it's a first baby. The next birth, however, is one of the  miracles in the book. After a fall, concussion and a bad infection following a chill caught while unconscious outside on a freezing night while Len was at work, Conchita is delivered of a premature boy. She is not lucid, due to her medical issues, but despite emergency crews being summoned in the dead of a thick London fog to retrieve the infant for medical care, Conchita, from some deeply primitive source, refuses to release the baby, which she has tucked between her breasts. The baby survives, Conchita having her dressmaker daughter fashion her a sling to keep the baby tucked between her breasts, and feeding him with expressed milk off the tip of a fine glass rod - used by another daughter for icing cakes. Worth contrasts the care of this tiny infant with the typical - even today - de-personalised, removed care that these tiny early babies have, in humid cribs, on hard surfaces, under bright lights, rarely touched, other than for procedures... It was incredibly moving.

There are many more stories, and with two more books to go - more shopping... - many more to come. I do recommend this book for anyone who has an interest in women's health, social history, postwar British history...or just a really good, real story...

P.S. I promised this and then forgot about it. If you click on this link, and then go to page 6 of the PDF file it opens, you will find my article about the parishioner at St James' who was one of these midwives. She is a MOST delightful woman and it rates right up there at the top of my interview list since I started this job.
http://www.sjks.org.au/images/stories/annas_folder/connections_feb13.pdf
Posted by Kaz at 22:00