I signed up for The Hoopla the other day. It's a news website set up by Wendy Harmer that approaches news and current affairs from women's perspective. In amongst the things I found while I was cruising around the site, getting to know where things were, was a list of top books from last year and a suggested list for what was coming out this year, both compiled by reviewer and blogger, Meredith Jaffe. I'd include a link to her blog, but I can't get to it via Hoopla for some reason. Anyway, from Jaffe's lists, I compile my own - smaller - list and took me down the hill to Oscar and Friends in Double Bay. I came back with three of the books on my smaller list, plus the first book in a series for Twenty-One (I mistakenly gave him the second one as a gift...oops!) and another treasure that I will blog about soon...

I have gobbled up the smallest book from my new stash - I grabbed it for the commute this morning, precisely because it was the physically smallest book in the pile and my bag was a bit full, but also because the blurb had me really intrigued. 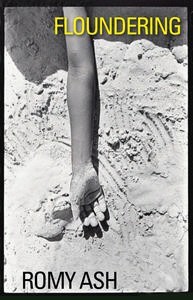 Floundering is a debut novel by Romy Ash, a Melbourne writer. In an except from her review on the back cover, Cate Kennedy writes,


These boys are so real you will lie awake worrying about them, hoping that somehow they will find their way through.

Thankfully, I started reading this book this morning, and I've just finished it, otherwise it would have been one of those books that kept me up reading until it was finished, because Kennedy is quite right - it was impossible not to worry about what was going to happen next.

Tom and Jordy have been living with their grandparents after having been unceremoniously dumped on the doorstep by their mother, who has decided she can't manage them on her own. Life has been safe, predictable, comfortable and secure, but that changes suddenly when Loretta appears one afternoon, trailing them in a beat up car as they walk home from school. When she stops, Tom gets in but Jordy is reluctant. When she insists, he looks vainly up and down the street, but there is no one around and he joins Tom and Loretta in the car. Without preamble, she heads the car out of town, driving west into the hot afternoon sun. Jordy is hostile, peppering Loretta with questions, which she evades, insisting that she never left them, she was always coming to get them, that everything will be fine now...

The story is narrated by Tom - even the conversations they have are held within the narrative, without using inverted commas, so that the sense of being swept along with events as helplessly as the boys is enhanced.

Loretta waits until they've crossed the border into the next state to phone their grandmother. The small agonies of traveling in an old car in the heat of an Australian summer without any proper supplies add up, and Tom's sweaty, sticky, increasingly dirty skin and clothes become a tangible discomfort, and I found myself willing Loretta to just stop the car someplace where there was a tap and just wash him down, but that never happened. He gives up trying to clean himself and find a comfortable spot, resting his head against the window of the back seat and letting the vibrations of the moving vehicle lull him into a kind of a trance.

Breaks, when they happen, are rushed and frightening - a brief pull into a petrol station for fuel and toilet stops, and a rushed exit while Loretta pulls junk food from her pockets that she's lifted without paying. The same in another town, only it's a supermarket this time. They sleep in rest stops along the highway, the car pulled in behind trees. The boys squabble, old tensions surfacing as Jordy attempts to find some sense of control in the situation and Tom tries gain strength from him. Loretta is offhand with them both, casually abitrating when the squabbles irritate her beyond her scanty patience. Eventually, they turn off the highway and rattle down a rough, corrugated dirt road towards the coast, winding up at a primitive beachside campsite of tents and rickety caravans where Loretta parks outside a derelict van and announces they've arrived. There's no power, no water, and just a long-drop toilet at the rear of the van. Rummaging in the dusty cupboards, she finds a few ancient cans without labels, a can opener and some furry plastic plates and cutlery to make a primitive meal.

They're spooked by the old man who lives in the van next door. He is antagonistic, and announces that he doesn't like kids and they're to stay away. At the same time, he points out that they have to bring water in... The next day, Loretta leaves the boys and heads back to the highway to get water and provisions. When she doesn't return, they brave Nev, the man next door, and insist he take them to look for her, which begins a tense and unpredictable relationship between the three of them.

Things get more and more unexpected and difficult. Loretta is erratic, uncommunicative, and lackadaisical in her care of the children. There is a rising edge of panic in Tom's narrative that increases steadily, like one of those imperceptible hills that look flat until you have to walk up them and they just keep going up and up while the burn in your calves increases.  Jordy, struggling to manage in his position as the older of the two, is alternatively offhandedly nurturing of Tom and then roughly dismissive of his fears and needs and his own tension is played out in his inability to defecate. Although the setting itself is inherently beautiful, it is also hostile and dangerous, and can ultimately offer the boys no sanctuary. Reading through to the end becomes nail-bitingly tense and it isn't until the last few pages that resolution is reached.

This is a wonderfully fresh and masterly first novel. It's a fairly quick read - partly because I found I just had to keep turning the pages to see what would happen next, so I completely lost track of time when I got home this afternoon to continue reading. It brought back many memories of being hot in the back of an un-airconditioned car in the middle of summer with the crusty stickiness of salty seawater drying on your body; the greasy saltiness of hot chips wrapped in newspaper, eaten with sandy, salty fingers; the short-term satisfaction of cold soft-drink, followed inevitably by a thirstiness that can only be assuaged by lots of cold water; and the unremitting brassy glare of the Australian sun.

Given the current heatwaves - even here in Sydney - those memories suddenly feel very much closer than they have for years.  This book is in bookshops now, and I recommend it to anyone looking for something a bit unexpected. It's not exactly a 'nice' read, but it's hauntingly authentic.
Posted by Kaz at 00:29