DB says I'm a frustrated academic. He's probably right, although, there are a great many things about academia that I really don't miss. That being said, there is something about research...the thrill of the chase...yes, really!

My undergraduate experiences were mostly of a practical nature. I spent some years - in two bouts - at a conservatorium; first as a french horn player, and later as a singer. Lots and lots of lessons, rehearsals and masterclasses, and little bits of academic subjects. Years later, I did what I'd dreamed of doing while I was in high school, and went to art school. It was a studio-based course at a technical college, so again, lots of time messing around with 'stuff', being perpetually dirty - picture the scruffy clothes, face smudged with charcoal, clay, paint, etc... Twentyseven was in a constantly agonised, embarrassed state when I collected him from school like that - his friends thought I was cool though! But similarly, the academic component of the course, while it was there and we had some amazing academic staff, was a smaller percentage of the curriculum.

I was hassled into an academic master's post-grad degree by a good friend who, quite reasonably, suggested that visual arts and music by themselves were, perhaps, not going to fast track me to a job with a viable income... So, with the added incentive of the curiosity factor about what would happen if I had to write something bigger than a 2,500 word essay, I did it.

I love research. I really do. I'm only sorry that it was a coursework program, in that I couldn't upgrade my thesis to something bigger. As it was, I had to get formal permission to take it to 25,000 words - which was a few thousand above the required amount.

Anyway, there is a point to this rambling. As my regular followers - HI! - will be aware, it's a little while since you heard from me about an actual book - apologies. I'm completely swamped with work - both salaried and freelance. I'm comfort reading - the rest of the Marlow books - noting odd quotes, and you will, when I get some time and headspace, hear about those. However, I'm also up to my eyes in research and writing for a presentation I'm giving on Saturday for the St James' Institute as part of the Patronal Festival activities.

The St James' Talks are a half day of short presentations by people who are part of the St James' community in some way. I'm kicking off the sessions, and will be followed by three other presenters on a range of different topics. I'm playing with an interfaith, multi-discipline topic - because I'm that kind of unorthodox academic with too many interests to be tidy. It's something I did as an impromptu presentation for the South Australian branch of the Council for Christians and Jews a long time ago, and St James' have offered me an opportunity to revisit it a bit more comprehensively.

I'm looking at Marc Chagall's painting, White Crucifixion, painted in 1938. Here it is: 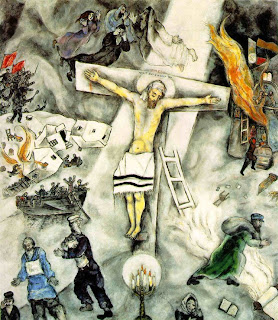 My topic is The crucifix as a universal symbol of suffering in the Western art canon.  Without wanting to include too many spoilers - you have to actually come along if you want to hear how it ends... - I want to unpack the use of crucifixion imagery, and I'm using this painting by a Jewish artist to do so in a Christian environment.

As you might imagine, my reading list has been fairly widespread. I've been loaned a wonderful book - one I've wanted to own for some time, so I really must try and track a copy down - Images of Religion in Australian Art by Rosemary Crumlin. It is a wonderful survey of works, and also looks at the Blake Prize - an annual competition of religious art that reached its 60th anniversary last year.  Crumlin has written a book about the Blake as part of general commemorations of last year's anniversary, and I'd rather like a copy of that too! I've been digging into the Torah, looking for commentaries on the Second Commandment - the one that tells us to make no graven images. I also remembered that, in my library of Jewish books, I have a little gem by David S. Ariel, What do Jews Believe, which unpacks, in refreshingly ordinary language, lots of the esoterica behind Jewish doctrine.

However, the absolute creme de la creme of my material for this seminar is a paper that came to me from Israel, from Dr Ziva Amishai-Maisels from the Hebrew University in Jerusalem. I found an abstract for it online ages ago when I did some surfing to see what was around on the topic, but couldn't find any way of obtaining a copy, as it was originally published some time ago. So, thinking laterally, I went hunting for Dr Amishai-Maisels instead. I wrote to her and told her what I was doing, and asked if she would be happy to send me a copy of her paper. I got an email back overnight telling me that she didn't have a soft copy and would have to look for her archived copy of the journal and photocopy it, and send it by snail mail, and was that OK? Was that OK...??? I was stunned that someone would be happy to do that much work for me. In due course, a package arrived in the office for me from Israel, and I now have a copy of 'The Jewish Jesus', originally published in the Journal of Jewish Art in 1982. Dr Amishai-Masiels has qualifications in art, art history and theology, and it is the most wonderful piece on Holocaust art, and the use of the crucifix by Jewish artists, that I've come across. Poor DB was watching TV when I came roaring out to the living room needing to share the reading experience with someone. I don't remember what he was watching, I just remember that it was something light and commercial and I hit him with the Holocaust and crucifixions at the end of the day in an avalanche of mad excitement...

So, for anyone in Sydney, or who might be in Sydney this weekend...if I've whetted your appetites for something a little out of the ordinary way for an activity hosted by an Anglican church, check out the St James' Parish website for details on booking for the St James' Talks. You can, if you're not being organised enough to book ahead, come on the day and pay at the door.

If I don't know you and you come because of this post, please introduce yourself on Saturday - I'd love to meet you!
Posted by Kaz at 01:18