Who will inherit your books?

I came across an article this morning, courtesy of another blog I follow - look here - that spoke of something that I'm sure all of us who create libraries consider at some point when we think on these things that none of us really want to think about... What will happen to these treasured collections when we are no longer here to enjoy them? Amanda Katz's article, Will your children inherit your eBooks? looks at many of the issues I've been exploring from time to time in various posts, about the nature of actual books and the changing ways we read.

She suggests that the books themselves in any particular collection will dictate, to a certain extent, what happens to them. Books of value will stand more chance of being kept, or at least sold on to someone else who will keep them. A lot of popular fiction has, in all likelihood, a much more tenuous chance of being kept and treasured.

I remember my kids discussing the fate of my books with me once. It was mildly amusing. Twenty Seven was wandering the shelves, identifying various volumes that he knew were 'collectibles' and were, therefore, valuable - and put his name down for those. Twenty One had a more eclectic approach, picking out particular series that he had a liking for, without paying much attention to what they might be worth. He laid claim to all my Arthur Ransomes, on the basis that the dust-jacketed copy of Swallows and Amazons is actually his - my mother gave it to him years ago and he asked to keep in in my shelves - and I collected the rest of them. His logic was that there wasn't much point in Twenty Seven having them if he didn't have the first one.

Katz wrote about the rise of the eBook and the somewhat dubious joys of inheriting someone's kindle... Or being able to access, in perpetuity via the Cloud, someone's annotations in their electronic reading material. Apparently, new technology now allows Kindle readers to share their annotations with anyone who's reading the same book - I don't like reading highlighted texts at the best of times, so the mind boggles at what that experience could be like! Personally - as will come as no surprise to any of my regular readers - this holds absolutely no appeal for me at all.

I have a particular memory of Twenty One as a wee thing - actually, many memories, because this was a repeated activity. At an age where I should have been able to hear him constantly all over the house, I would become aware that it had been quiet for some time - a warning for any parent of small children... On checking out his bedroom, I would find him quietly engrossed in creating an entire world on his floor. All the matchbox cars would be out, all the Duplo and Lego would have been made into buildings of various sizes. The smaller of his 'people' (stuffed toys) populated this world and the streets were paved with...books. Every book in his own bookcase, some 'borrowed' from his brother's, and if he'd run short there'd have been an incursion into mine, had been laid down to create the roads. The fact that they were all different sizes and thicknesses didn't appear to be an issue, and he wasn't walking on them himself - he was very carefully edging around on the miniscule bits of floor he had left to keep everyone in his new world occupied.

I tell this story because it couldn't have happened without a house full of books being at his disposal. The end of these worlds involved - as you can imagine - lots of packing up. That was a long, drawn out affair when it came to dismantling the roads, because he needed help putting all the books back in the right places, which meant looking at them, which meant in some cases, stopping to read them together.

I like to think of my books being something that doesn't represent an awful problem for them when I'm dead. I'd like to think that they'll meet and pack them up together, divide them amongst themselves and their families if they have them, and pass them on for other children to read and build roads with. There are some valuable collector's items in my collection, but they're there because they're books I love and read. Over the years, there have been many times I've been urged to sell them when money has been tight, and if I'd only bought them for their dollar value, perhaps I'd have considered it at times. But I didn't. I bought them because of what's inside them - a magic that is priceless.

For Twenty One, because he follows this blog, this picture in memory of those worlds, and because with a collection as big as mine, and as big as some of my fellow book junkies who also read me, you could do this, if you felt so inclined. I feel kind of sad for the eBook readers, because you can't do this with a single Kindle or tablet! 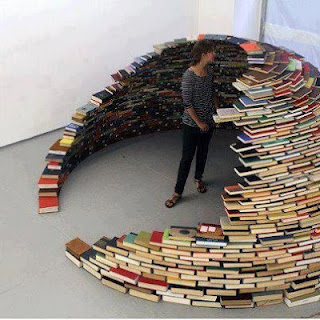 Do follow the link and read Amanda Katz's article if you haven't already - the back story that prompted her writing of it is one of those lovely things. Do you have a story of a particular book that it brings to mind?
Posted by Kaz at 19:48