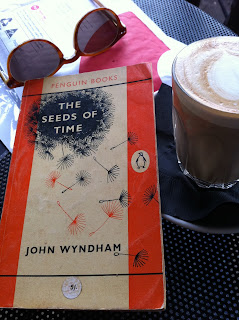 ...well, a little slice of book junkie heaven! Finally, I made it to the post office box and in amongst the boring, windowed envelopes was a small padded bag with a handwritten address containing THIS! Peter, over at Kyusireader, eat your heart out...just look at my new treasure... As I said, after some hunting around eBay, I came across this copy of John Wyndham's The Seeds of Time, the anthology I've been missing for ages, and bought it. It's a 1962 Penguin edition with, huge bonus, a two page foreword by the man himself discussing the science fiction genre and positioning himself within it with this collection of short stories. They were written over a fifteen year period and he refers to them as 'experiments' with the genre, which opened up when,


...there came a time when certain editors [of magazines] grew mildly mutinous with the perception that the terms of reference did not truly restrict them to the adventures of galactic gangsters in space-opera, and they began, some by stealth, some by declaration, to encourage their authors to do a bit more exploration within the definition.

Wyndham wraps up his foreword by thanking numerous un-met editors who, as he says '...encouraged me by printing one or more of these experiments on the theme: 'I wonder what might happen if...?'' Thank goodness they did, or we might not have his wonderful novels.

Having collected my parcel and gloated over the contents briefly, I decided that the next bit of my morning could wait just a little while - long enough for me to read just one story - hence the accompanying photo! I started at the beginning with the first story, Chronoclasm, which deals with time travel and the potential consequences of interfering with history. The feelings that I think we all nurse about time travel are summed up beautiful by Tavia, the female lead, who has come to 1950s Britain from the twenty-second century,


...all the things one could do! Fancy being at the first night of a new Shaw play, or a new Coward play, in a real theatre! Or getting a brand-new T.S. Eliot on publishing day. Or seeing the Queen drive by to open Parliament. A wonderful, thrilling time!

It's a delightful, bittersweet story that leaves the reader hanging at the end, wishing there was more - that tantilising thing about short stories! I got all my errands done and came home to crash with tea and the second story, Time to Rest. It's a different beast; the story of the remnants of the human race, all men, marooned on Mars following the end of Earth's existence. The central character, Bert, was on the last ship that left Earth, and with his fellow crew watched the Earth split open and self destruct. By a mixture of guess work and navigation through a changing space, they make it to Mars, where they're slowly joined by others coming back from different exploratory journeys, to end their days on the red planet. It's a sombre, bleak little story - one that I don't think I'd manage if it were a full length book.

Now I have to get on with my work for the day, but there are eight more stories to go yet....including the chilling Survival, which is the one I have the clearest memories of...again, another hanging ending, but with a very nasty twist.
Posted by Kaz at 22:14