I don't know how I've managed to not read this book until now. It was first published in 1999, and it's so my favourite kind of writing - quirky, unexpected, elegant and real. Anyway, it's taken me until this week to read it, and it's been one of those periods of synchronicity that occur sometimes, when enough random factors come together that result in something actually happening. The movie - which, like the book, I missed in the cinema, was on TV here just recently. I was actually watching the second State of Origin match with Dearly Beloved that night - an annual interstate battle of rugby league between new South Wales and Queensland, for my international readers - but a mate interstate had that choice superseded by his partner, I believe and they were watching Chocolat! Then, my very best friend in the world suddenly said something quite apropos of nothing, and this book came up... Also, the latest in what has now become a series of three books has just been released here. I figured it was time. 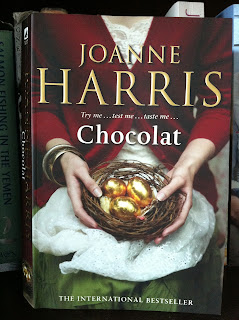 This is - pardon the pun - the most delicious book. Really! There is the most marvelous whimsy that underscores the narrative that is just so refreshing without being contrived at all. At the same time, there are some great truths, some very human truths, that are woven into the plot that make this such a solid read in many ways. There is great wisdom in Harris' writing, in the finely drawn characters, in her observance of human frailties and vulnerabilities. Given a choice, I would go out as Armande does, with her faculties, if not her body, intact and making a choice that is hers and hers alone to make. Given the choice, I would also live as Vianne does, totally on her own terms, in full acceptance of her difference. Although, the inner conflicts that she struggles with are no different, in reality, than the inner conflicts any of us have, if we're honest, that come with the life choices we make, as nothing is as simple as we'd like it to be.

Page 41 of my edition turned this up:


... In my profession it is a truth quickly learned that the process of giving is without limits. Guillaume left La Praline with a small bag of florentines in his pocket; before he had turned the corner of Avenue des Francs Bourgeois I saw him stoop to offer one to the dog. A pat, a bark, a wagging of the short stubby tail. As I said, some people ever have to think about giving.

While Vianne frames this concept within the bounds of her profession as a chocolatier, it has a wider application. Within my own tradition it is a mitzvah to give. The Hebrew word translates variously, sometimes used as 'good deed', but in essence it is a law. The 613 mitzvot are the 613 commandments that make up halachah, Jewish Law. We are commanded to give. Not indiscriminately. We are commanded to give within our means, as to give more than we can afford means we could ourselves become a burden for someone else, and that is contrary to the law. Vianne's gifts allow her to see past people's facades to their inner longings, enabling her to offer the chocolates that are their favourites - even though they might not know that themselves. In opening them to the satisfaction of those inner longings, she unlocks many of their constraints - things that bind them as individuals and as they relate to others.

The hidden but simmering prejudices in the little village of Lansquenet-sous-Tannes are typical of most small communities. Fear of the outsider, condemnation of difference, ostracism of those who do not conform to local custom, fear of local authorities - in this case, the priest, Monsieur le cure, Francis Reynaud, a local boy with a past that he likes to believe has been erased by his long absence from the village...

Vianne and her daughter, Anouk, arrive on the wind on Shrove Tuesday, the beginning of Lent, and open a chocolaterie. It is a great affront to those who curry favour with the priest, who has a stranglehold over many of the villagers. Yet, the simplicity of Vianne's welcome, and her lack of adversarial characteristics endear her to many very quickly. Her warmth snowballs, extending to the river gypsies who land on the river bank below the village's tiny slum district, in the face of the villagers' animosity and outright hostility from the priest - whose hidden agenda colours his reaction to them.

There is humour, drama and tragedy within this story. However, the real tragedy is voiced by Anouk - out of the mouths of babes...

I catch her up into my arms and kiss the top of her head. She smells of smoke and frying pancakes and warm bedclothes on a winter's morning.

Why not? It's as good a place as any.

Not quite a lie. This time it may even be true.

Anouk has all the characteristics of a gypsy child - resilience, strength of character, acceptance of her lot, wisdom beyond her years, precocious insight, and the ability to land in a place become part of it quickly - just as Vianne had as the child of a wandering, 'different' mother. Yet, she yearns for stability, she yearns to stay in a place long enough to keep the friends she makes, she yearns to fit in. Vianne senses this in her, wants to give it to her, and yet can't erase her own ghosts sufficiently to grant her this wish. As always, when a certain wind blows, the restlessness starts to pick at her, her sense of having achieved all she can in a place becomes more than she can resist.

I haven't done an outline of the plot. I think I intended to, but it didn't happen. I wrote as the book itself led me to write, so this can't be properly called a review. I'm not sure what it is. If you've not read this lovely book, I strongly recommend it. If you've not seen the film, get that too. The version with Juliette Binoche, Johnny Depp and Judi Dench is faithful to the text for the most part, although there are amalgamations and contractions of characters. That doesn't detract though - and I don't think there's any reason to get rabid about reading it first then seeing the film or vice versa. I saw the film first and have loved the book. I don't know that loving the book first is going to detract from what is a lovely film in its own right. 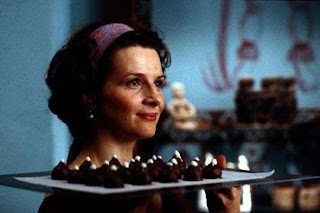 I've started The Lollipop Shoes, the next in the series... I'll be back with more when I've finished that!