Chosen By a Horse - Susan Richards

Tissue alert! You will need them - lots of them - at the end of this book! It won't matter if you're a horse nut or not, you'll still need them. 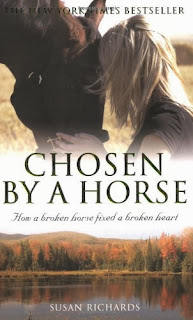 This is one of the books I picked up while we were away, and I read it yesterday. It's still echoing today, because it resonated so strongly with me. I don't remember learning to ride. My godmother had a little stock horse mare, Trinket, and all of us (my brother and I, and my godmother's four) were put on her very early. We graduated, variously, to different horses over the years, and my godmother's boys went on to play polocrosse for NSW. Sadly, when the opportunity was there for my parents to buy a ten acre block nearby, my father balked, and insisted on staying in the city, otherwise, I could have had my own horses growing up. As it was, I had the horses at my godmother's on weekends and during holidays. Then we moved to South Australia and lived in a small country town, so there were friends' horses. My mother handed me over to one of the local landowners to teach me some more so she (who knew nothing about horses) felt better about me hooning around on quads because he could tell her I was safe. My mother got me a job in a local trotting stable in the hopes that if all I did was grunt work I'd grow out of it (that didn't work). For a brief time, I had a free lease of a mad, green-broken two year old gelding. Then we moved to the city...and horses were difficult again.

Years later, post divorce, I had a free lease horse again from the neighbour of a friend with a farm in the Adelaide Hills. He bred Australian Stock horses - like Trinket - my friend bred miniatures. The neighbour didn't get the minis at all...! So he offered us both a riding horse from his herd. My girl, Jazz, had always been the surplus horse, because he had too many. She'd grown quite distrustful of people because always, she'd just get to bonding with someone, and then they'd be gone. I had six turbulent months with her with all sorts of dramas, but about three months in, she attached to me. I'll never forget the first day I walked to the fence of their paddock and she glanced up, went back to grazing and then did a massive double take and looked back at me, then came to the fence. Magic. She died in an awful accident, and there's nothing quite so shattering as the mass of a dead horse on the ground. I still see it in my head sometimes. The neighbour came by about three weeks later. My friend had been sending me out on her horse, Missy. Missy was grieving, as was I. My friend couldn't bear to go out by herself. Then the neighbour turned up and offered me "the big mare in the back paddock. You'll want to lunge her a bit, she hasn't been ridden for a few years. And you might want to put her in a ditch before you try and get on..." So we walked across the road to his grazing property to find her. Seventeen hands of Stock Horse/Thoroughbred cross - he wasn't kidding about putting her in a ditch! He'd sold her as a youngster, and she been trained for dressage, and had done quite well. Then he found her in a less than ideal situation and bought her back - that's why he always had too many horses, because he did that a lot. He'd thought about breeding her, but hadn't got around to it. So, we started working her on the lunge to get her fit and used to being handled again, and then started taking her out. She was very different to Jazz, and quite an education to me, because she knew way more than I did about riding aids, given I'd been taught by a stockman! That period of my life was very special, largely because of the horses. It's been a long time, and I'm only just getting back into riding again - albeit very gently, due to my current health issues.

However, I can definitely identify - as anyone who's had anything to do with horses could - with Richards' story. The horse in the title is a rescue horse - a Standardbred (used for trotting) who was one of a huge bunch seized by the SPCA. She already had three horses; bossy Georgia, a Morgan mare, and two geldings, Hotshot and Tempo - a close knit little trio. Her own riding days were behind her as a chronic back condition had left her unable to ride. But the routine of caring for the three horses, and her job in social work had created a safe life where she could heal from a violent and abusive childhood, and a failed marriage. She's quite upfront about the relationships she has with all three horses, particularly Georgia, as a substitution for a relationship with a partner. The last thing she intended to do was rock the boat with the addition of another horse - until the word went out about the mob of rescue horses. One of the critical issues for Richards' was her fear of illness and loss, a legacy from the death of her mother when she was five - which began the years of being passed from relative to relative. A rescue horse, in addition to the potential problems of adding it to her three, also posed the challenge of rehabilitation from goodness only knows what level of illness, behavioural and socialisation problems.

She chose a name from the list of mares and foals. Arriving at the yard where they were being held, discovered a mob of horses so traumatised that they couldn't be approached, let alone separated from each other. Singling out the horse she'd chosen proved impossible, but then one mare took herself and her foal out of the mob and walked into the waiting truck, so Richards' took her - Lay Me Down - instead.

Richards' had to face the horse's immediate illness, brought on by the awful conditions and malnutrition, and her seriously maladjusted and violent foal. Lay Me Down improved quickly and got better. The foal didn't, but the judge on the case ruled that the mares could stay in their foster homes, but all the foals had to be returned to the owner, so any hope of rehabilitating the foal was lost. Meanwhile, Lay Me Down had to be introduced to the other three horses, which produced all sorts of excitement and tensions until a new pecking order was carved out. Richards was getting to know Lay Me Down and discovering that, instead of a shattered and dysfunctional animal - as would have been expected after her experiences - Lay Me Down was possessed of a sweet and loving nature that had somehow survived her abusive environment. And so began a relationship that was to prove life changing.

This is a very special book, and even if horses aren't your thing, have a look for a copy. The healing power of animals is well documented. I know that until we have animals our house, there'll be something missing. A horse isn't an option just yet (but is on the list for down the track), and I'm not fit enough yet for a dog, so a Siamese cat will be joining our household, pending permission from the landlord and sourcing a breeder. There's a sequel to this book - Chosen Forever - which I'll have to find now to see what happened after Lay Me Down.

If you find a copy, just don't forget to arm yourself with tissues towards the end of the book. Don't say I didn't warn you!