Beyond the Rails - Jack Tyler

Regular readers may remember my December post, I've got mail! That was about the arrival of Beyond the Rails, hot off the press, a gift from the author. It got packed to take as holiday reading, and then got lost in amongst the pile of books I acquired a various stops along the way (oops...) and in the end, I read it in the week after we got back - and it was exactly the kind of escapism I needed to help adjust to being back from holidays! 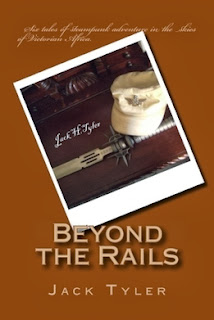 Beyond the rails started as a series of short stories. Back in August 2012, after many hints from Jack, I eventually got around to reading the first of them, The Botanist, on the bus to work one morning. Steampunk has never been a genre I've sought out, so I was slow to get going. You can read the post I wrote about that experience HERE. I'll confess, now, that I didn't manage to get around to reading the rest of the stories at that point - they were on Jack's website, and I hate reading on screens. Printing them was a long and involved process of copying and pasting, then tidying up corrupted formatting, and so on. Along the way, via emails and conversations via both of our sites, the gentle hassling continued from Jack to read them, while I continued to prevaricate. Then while he was on a new site, the idea that they might become a book started to be bashed around between us. Meantime, the editor of a magazine in the States offered to publish them as short stories, and Jack jumped at the chance. It looked like the book might not happen - until, he discovered that the people at the magazine were happy for him to go ahead.

While they were written originally as self contained short stories, they involve the same core group of characters - the captain and crew of the Kestrel, an airship carrying freight into the wilds of colonial Africa beyond the train line. They're a motley group of misfits: Patience Hobbs, English, the pilot; David Smith (quite likely not his real name), an American from the frontier, deck crew; Gunther Brown, German, the engineer; and Clinton Monroe, an English ex-serviceman, cashiered out of the army, the captain. They take Nicholas Ellsworth on board in Mombasa, newly arrived from England with his freshly minted botanist qualifications, bound to classify rare flora in the wilderness. Things don't go quite as planned - which appears to be de rigeur for this group - and after many adventures, very little plant classification, and great risk to life and limb for all concerned, Nick finds himself taken on as crew for the foreseeable future.

There are five more stories in the book, and a preview of the seventh, all of which tell a story in themselves, but become increasingly cohesive with smoother transitions between one and the next, so that they run rather more like long chapters. One of Jack's concerns about compiling the stories into book form was that they'd not been intended to be chapters, they'd not even originally been intended to be a series, as such. He wasn't sure that they'd run together well. He needn't have worried - they flow very well. Volume Two, when it happens, may possibly develop more along those lines, as he will now have a book in mind when there are enough stories written.

One of Jack's particular strengths is his dialogue. Writing convincing dialogue is a difficult art, particularly if you take into account the different cultural backgrounds of Jack's characters - which grow to include a ramshackle group of Australians in a later story! Part of getting it right means there has to be due attention paid to the characters themselves, and again, here he has clearly spent enormous amounts of time creating his people, their back stories and their individual peculiarities. They're all solid, and the shifting dynamics between them in varying combinations is great fun, and often very amusing.

If Steampunk is your thing, or you just love a good, old-fashioned adventure, go buy yourself a copy. It's available on Amazon - follow this LINK.
Posted by Kaz at 22:00