Who had this book? Thinking back, as a child this was a book everyone knew. Most people I knew who had books had a copy of this. By the time I had my own children, it had been banned on racist grounds. Relatively recently though, I've seen new paperback copies of it in odd bookstores, so along with Noddy, golliwogs, and numerous other books and toys that got banished from children's lives due to political correctness, it appears to have been reinstated!

This is my original copy, inscribed on the front end papers in my mother's beautiful handwriting. It was originally published by Chatto and Windus in 1899, with constant reprints, including this edition in 1966 - there were even editions printed during both world wars.

The story is about a little boy, Black Sambo, who lives with his mother and father, Black Mumbo and Black Jumbo. Black Mumbo makes Black Sambo and glorious jacket and pair of trousers, and Black Jumbo buys him an umbrella and a pair of shoes from the bazaar. He goes in his new clothes for a walk in the jungle and meets a series of tigers who, one by one, take an item of clothing in exchange for not eating him. Left with nothing but his loincloth, Sambo is miserable, and then, frightened when he hears fierce growling. Carefully sneaking up, he comes across the four tigers all fighting about which of them - each with an item from Sambo's wardrobe - is the most grand. They take all the clothes off and start fighting and then it gets to the truly weird part of the story - they end up in a ring around a tree, holding each other's tails in their mouths, going round and round until they melt and turn into ghee, which Sambo then takes home for his mother to cook with! Sambo gets his clothes back too...

It's a strange little story, but I remember loving it as a kid. Eighteen found it when we were unpacking books after our latest move - he thought it was hilarious. My edition is a much loved, battered hardcover, 10cm x 13cm. 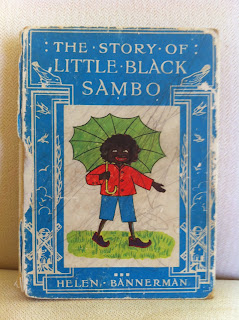 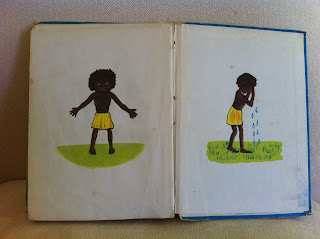 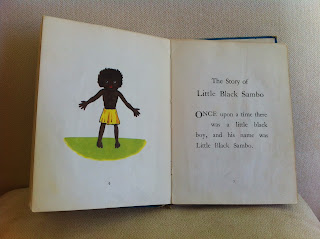 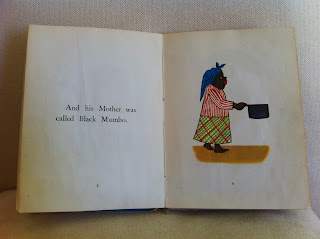 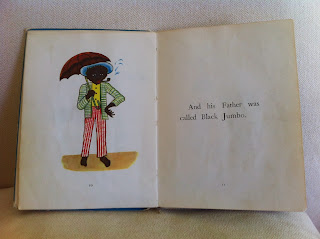 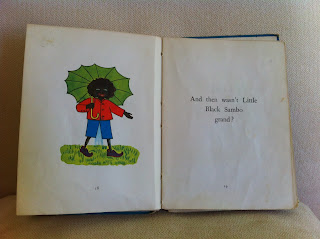 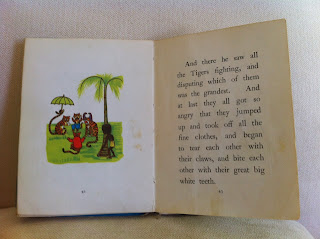 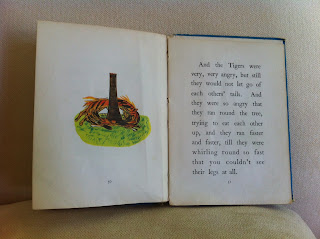