I was bad. The other day when I was in Double Bay, I dropped into Oscars and Friends for a wee browse, and then - remembering that DB and I have a holiday coming up - decided that a few purchases wouldn't be TOO awful...that way I'd have some books to take with me. And then I read one of them! 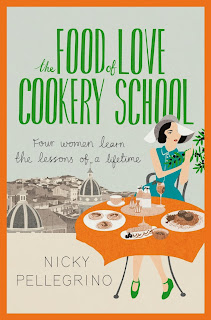 This was expressly purchased with light holiday reading in mind - but after Jephte's Daughter, and despite getting David Copperfield off the shelf after getting inspired by Arabella's blog post about her Dickens reading, my head just wasn't ready for anything that required any energy. And my David Copperfield is a lovely vintage hardcover with the tiniest print!

The Food of Love Cookery School is another lovely, light, food and romance based novel, in a similar vein to Anthony Capella's The Food of Love. Where that was set in Rome, this one is in Sicily. Four women - Tricia and Moll from England, Valerie from America and Poppy from Australia - arrive for a week long, live-in cooking school and food experience taught and hosted by Luca Amore, in the home his Nonna left him.

After a disaster in his previous career in London, Luca has returned to his home town of Favio and created the cooking school as a way to honour and remember his Nonna, and to help heal himself from his traumatic experiences. Part of the aim of the school is to create an environment where the participants can slow down and appreciate the pace of the local lifestyle, and the care that goes into the food of the region. Sicily has a fascinating culinary history, with influences from invading Arabs, Greeks and Spaniards, all of whom have left elements behind that have been incorporated into the food. Luca has settled into the routine of the week long schools, he likes the down time between the schools when his Nonna's house is his again, but he also enjoys meeting the new people who come. He feels as if he's achieved the balance he needed, and has no idea that this new group will change everything. All he knows about them is what they've filled in on their questionnaires. He doesn't know that one of them is hiding a secret, another is hoping to find love again, one is desperate to escape her life, and one has just succeeded in doing that.

The narrative switches between third person and intervening chapters in the voices of the different individuals - a device used by Pellegrino to make the reader feel as if they are a fifth member of the group. It's interesting, but it did take me a little while get used to it and I wasn't really aware that that was the intention until I read the blurb on the back cover after I'd finished the book. It does shift the pace, and there are moments where I was left wondering just who the individual concerned was talking to or if, they were just that individual's thoughts. As the story opened out, it became clearer.

Each day at the school starts with Luca arriving at the house to make coffee and bring breakfast. Early mornings are THE time of day when people tend to be most themselves - it can take a little while for the armour we all wear to settle in for  the day. On that first day, Tricia sets an edgy tone when she discovers she's forgotten to pack her hair straighteners. Valerie loans hers, but they're clearly an inferior brand - and the resulting tense conversation is the first time we start to get an inkling of the differences between the four women, their priorities, and how they respond to each other. There is a cooking class each day - either to make lunch or dinner - and field trips to local artisans, such as the village chocolate maker, winemakers, growers, etc, in between. Luca also teaches them to forage for wild food - there are capers for the picking on walks through the village, and fennel and other herbs.

Moll is the foodie of the bunch. A social worker and single mother of two teenage girls, she takes copious notes, photographs, asks innumerable questions, tastes everything, and has a list of food shops to visit while she's there. She also writes a food blog and this is an opportunity to give her readers a share in her big adventure. Valerie, the oldest, didn't intend to come alone. She had a friend teed up to join her on this first overseas trip after the death of her partner of twenty years, but at the last minute the friend drops out. Spurred on by the thought of what Jean-Pierre would say if she backs out too, she goes anyway, but is still weary from her grief and struggling to find herself as a single woman again. Tricia is a high powered divorce lawyer married to a busy doctor, who gave her this trip as a gift, hoping that the break will give her some much needed R&R away from a life governed by lists and stress. Poppy, freshly divorced and curious about her own Sicilian heritage, has taken a leap of faith and done this, her first overseas trip alone.

The dynamic in the house ebbs and flows, driven by each woman's particular baggage, Luca's mysterious background, the odd behaviour of Orsolina - daughter of the chocolate maker - who is very proprietary about Luca, and the journey each of them makes in the course of the week. The women, in turn, irritate, confound and comfort each other at various times, and Luca holds the group together until, towards the end when his own story comes into play, he is thrown off balance and we're left waiting until right at the end for resolution.

Like the Capella book, this is a lovely light read that comes with lots of fun information about Sicilian cuisine - which has long fascinated me - and a small selection of recipes from the actual school that inspired the story. Perfect for a hot afternoon with a long cool drink and some delectable little nibble!
Posted by Kaz at 22:02