It seems we are quintessential wandering Jews! We moved again on the weekend... Seventeen had the final exam of his school career, so we didn't need to live so close to his school any more, and we were craving the space of a house after years of apartments. So, we have left the Eastern Suburbs for a location a little further afield, although, we still - in terms relative to Sydney's great sprawl - live pretty close in.

And so, as all book junkies know, there was the Moving of the Books to deal with (thank you Seventeen and DB), and the great Bookcase Re-arrange... The living room in the new place has two parts, so the inner section is going to be a combination of library and creative space. On Saturday morning, it looked like this: 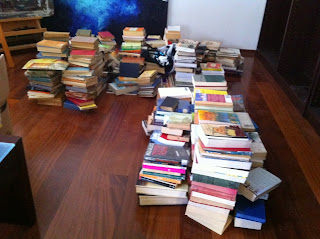 Then The Valkyrie arrived to help me get sorted. You'd think, given I can, once the books are in place, go to the shelves with my eyes closed and put my hand on the book I want, that I'd remember where they sat and the re-stacking would be a very simple operation. But no...it's amazing how quickly the order of the alphabet can escape the brain when one is tired and over the confusion of moving! However, by the end of the day it looked like this: 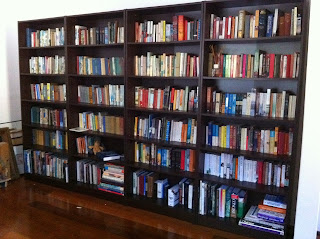 In the corner behind where I stood to take this pic, there are several large stacks of books - in the eighteen months in our previous place, the collection grew... Also, the rest of my books have been in storage for about three years now, and it's time to pull them out now that there's enough space for bookshelves to accommodate them. The few things that have already been brought out of the storage unit have shown some evidence of damp, so I'm not happy to leave the books there any longer. DB made a few less than happy noises when I mentioned the need to buy more bookcases - I plan on running them around the corner so they meet at the left hand end where the paintings are currently stacked - but I don't think he was being too serious.

It WILL be nice to be able to spread out, and if things go according to plan this will, hopefully, be our last rented place. The next move will be to something we buy, which will be chosen with library space on the priority list - and new, SOLID TIMBER bookcases to be built in....oooh, the luxury!!