My Side of the Mountain - Jean George

My Side of the Mountain is one of my all time favourite kid's books. My current copy is a Puffin paperback that I have to read very carefully, because it's falling apart - literally. There are great chunks of it that will fall out if I'm not careful because the glue has gone... 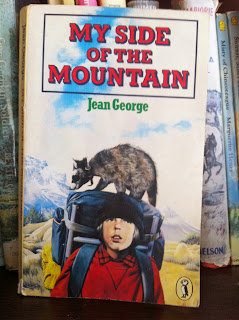 The cover illustration is by David McAllister, but one of the lovely things is that all the illustrations inside are by Jean George herself. It is, I think, my second copy - the first one also fell apart. One day, who knows, I may stumble across a hard cover edition that will last!

This is a classic adventure story. Sam Gribley is growing up in New York, crammed in an apartment with his parents and eight siblings. His father was a sailor, until all children were born, and he got a job on the docks so he could stay at home. However, there's the story of Grandfather Gribley's farm in the Catskill mountains... So, one May, armed with a penknife, a ball of string, an axe and $40, Sam sets off to find the farm and try living on the land... He's not exactly sure where the farm is, so he gets rides (this is back in the days when hitch-hiking was less dangerous than it is now...) to a town in the foothills and with the help of the local librarian, finds a survey map of the area to locate the farm boundaries. 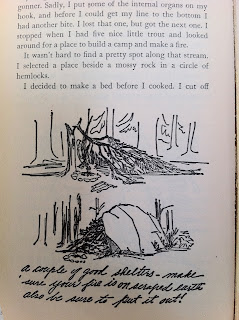 His first night on the mountain is a disaster. He does manage to catch a fish, and build himself a shelter but he's on the wrong side of the mountain and at the mercy of the cold winds. He fails utterly to get a fire lit with his flint and steel, and spends a miserably cold night out. Next morning, he finds a house, begs to cook his fish, and passes out in the warmth of the fire! The old man feeds him when he wakes up, teaches him how to get a fire started, and he's off again.

Once he finds the old farm site, he investigates the possibilities for a permanent dwelling. He knows that one of the reasons he's been able to get as far as he has is because none of his family have taken him seriously, and probably expected him home within a day or so. Not Sam; HE intends to set up and live on the mountain - he loves his family, but he doesn't like the crammed apartment, he doesn't like the hurley burley of New York, and he wants to prove that a Gribley CAN live on the land, in the face of his father's insistence that the Gribleys are for the sea.

As Sam builds his house in a huge hemlock tree that he hollows out, learns the resources of his immediate neighbourhood, and begins to make cautious 'friends' with local wildlife, it becomes apparent that this is no impulsive running away - he's been preparing and has done lots of reading and learning about wild foods and various bush craft skills. The summer bounty makes it relatively easy to trap small game and find fresh growing edibles, but to survive the winter, Sam is going to have to make a door for his tree, find some way of heating it, store enough food, and make warmer clothing for himself. That means getting a deer, as the small game he can catch can't provide him with big enough skins. He also, on a trip back up the mountain from the nearby town, spots falcons, and decides that getting a young one to train will help make him more independent as well as providing company.

He is nearly discovered a few times - first by a fire ranger who he spots looking around his 'yard' out the front of his tree just in time, and backs off so as not to be found. Then, in the wake of the sound of distant sirens, he comes back from a foraging trip to find a strange man asleep next to his fireplace...for a little while, he thinks the man is a fugitive from the law, but it turns out he is just a college professor on holiday who got himself lost while out walking. Bando, as Sam christens him (and is christened reciprocally, Thoreau), ends up staying with Sam for the rest of his holiday. They make jam from the blueberries that are in abundance, and willow whistles to play tunes. Bando promises he'll try and come back for Christmas - AND keep an eye on the papers in case any rumours get out about him living on the mountain, so he can begin a counter rumour to save Sam being discovered and sent home. Because, stories are starting to circulate about the 'wild boy' living on the mountain. The hunters - from whom Sam has quite a time dodging, although he manages to find enough of their deer that they don't find after shooting it to make a set of clothes, in addition to the door on his tree - report missing game; an old lady who lives in a nearby town surprises Sam the day she comes up the mountain to pick wild strawberries; a cub reporter, hoping for a scoop, tracks him down; and he stumbles across a musician holidaying in the mountains and they spend an afternoon swapping tunes. However, Sam is pretty content with his solitude, and settles in for the winter. 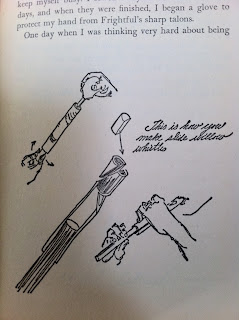 Christmas comes, the snow lies deep on the mountain, and Sam starts to wonder if Bando will make it. He does, and to add to the festive cheer, Sam's father also turns up on Christmas morning. Spurred on by the rumours and odd stories that appear in the newspapers, as well as Sam's mother's worry, he comes looking for Sam to make sure he's really all right. When spring comes, other changes come too. A boy Sam bumps into in the town on one of his trips into the library asks to come and stay on the mountain and Sam agrees. He realises that his life probably can't stay as it is, and then one day his father comes back...with the whole family! His mother tells him that she realises he's OK, but he's under age, and he needs to be with his family, but instead of dragging him back to New York, the whole family come to live on the old farm site - Sam's father having realised during his Christmas stay that Gribleys can belong on the land as well, and growing up on the mountain will be good for everyone.

This is a classic adventure story from an era when life was much simpler than it is these days, and I think it's one of the reasons I enjoy reading it so much. There is a lot of solid wood lore - believe me, I've looked up all the plants and crafts Sam uses over the years, and Jean George knows her stuff! I grew up partly in the country, and there's more of me that belongs there than in a city, so books like this take me back to memories of making jam and chutneys from summer fruits to last through to the next fruiting season, making our own clothes, and generally taking life at a much gentler pace than contemporary city life often allows. I don't know if the book is still in print, but it's definitely worth hunting out on Ebay or other sites if you have kids who read - or even if they don't... This book might get them started - if you haven't got it stashed away for your own quiet time!
Posted by Kaz at 14:02