Among other things, this novel has been billed using the tagline, 'Before there was Facebook, there was The Red Book', alluding to the famed Harvard Red Book. Each graduating year has one of these, and for the rest of their lives, at five yearly intervals, a tome is published, chronicling their movements, achievements, triumphs and losses. It is, effectively, a literary precursor to Facebook - the latter, of course, invented Harvard student, Mark Zukerberg... - in that the entries are written by the graduates themselves, so it's very much about what they want people to know about their highs and lows during each five year period that lead up to the anniversary weekend get-togethers on campus. 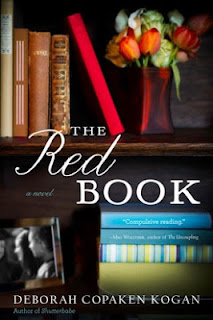 So, the book itself - because with a tagline like that, I already had something of a preconceived idea of what I was going to find when I read it... Was I right? Well, yes and no.The rest of the blurb, encompassing the basic information that the story revolves around a group of women who'd been roommates at Harvard, suggests that it's going to be an academically themed piece of chick-lit, and to some extent, that wouldn't be an inaccurate assessment. However, it has a certain pithy, no-nonsense style of observation in the writing that lifts it above the usual easy-going nature of average chick-lit. I remember when The Break-up (Jennifer Aniston/Vince Vaughn) came out in cinemas and was billed as another 'rom-com'. My cousin saw it before me, and she rang me to ask if I'd seen it, advising caution - all the marketing had emphasised the 'funny' cringe-worthy moments to emphasise 'comedy' element of the whole 'romantic comedy/drama billing was apparently a bit misleading. Curiosity piqued - it hadn't been high on my list of go to see films... - I went, and saw exactly what she'd seen... It was one of a batch of films that came out around the same time that were billed similarly - all light comedic romances or dramas that were, in fact, rather more edgy and observant of real life than their precursors in the genres, and had a quite significant amount of dark and difficult stuff in addition to the lighter hearted moments..

This book is a little bit like that. There IS the whole ensemble cast of characters and the inevitable comedic elements that make up real life, relationships, families, career paths, and the collisions of dream vs reality - all the messiness of life from which it is eminently possible to extract legitimate comedic moments. And that's fine, because often, in real life, we all have those moments where, if we don't laugh we WILL cry...

However, the protagonists - Clover, Addison, Mia and Jane - come with complex back stories and particular neuroses which have informed many of their life choices, and at the time the book is set, they're all approaching middle age and that point where - for those who have reached it - there is a natural imperative to really sit up and take note of just where we are in life, both for ourselves and in comparison to our peers. This is where The Red Book itself becomes another 'character' as the narrative is interrupted by odd chapters that are the Red book entries of the women's classmates. The narrative itself swings back and forth between present and past, and from character to character, so reading it is an experience that feels a bit like peeping into bits of their lives before being whisked away to another window... The women, alone, with their partners, and with each other, chew through what they have and haven't achieved. They open up about previously hidden failures. They bemoan the loss of innocence and youthful optimism, and voice regrets about decisions made and choices that could have been better. There is a ring of authenticity in much of this grist for the mill, because all of us can do this, so the mirror factor is working very well in the reading experience!

One thing I did find increasingly impressing itself upon me as I read was the similarity to Eric Segal's The Class - one of his Harvard-based sagas, which centres around the lives of five male Harvard students from their first year and up to the twenty-fifth anniversary reunion weekend. It was a bit spooky. I've read the Segal book so often, and I know it very well. There was a distinct sense of familiarity between that and this novel. I don't know if Copaken Kogan has read The Class - it was published some time ago - and her book isn't plagiarising Segal's at all, but the echoes are there. So I had a lurking sense that I was reading the other half of a his and hers pair or books, which was a bit odd.

As a weekend read, this is good stuff. The writing is solid, and the character development is excellent. There is enough genuine complexity in the characters to keep them interesting and believeable. Structurally, Copaken Kogan holds her cards close to her chest so that when the twists happen, there is a frisson of real surprise.

This was one of the small stack I bought from those lists I found on The Hoopla site. I'm glad I got it. I enjoyed it. I'll probably read it again, just 'cause... But, I don't think it will find a home with the desert island collection. It'll probably become fodder for the exchange option down at Gertrude and Alice (read my post about this lovely book shop HERE), where I can take my books and sell them back for credits to purchase second hand treasures there!
Posted by Kaz at 22:01