So, I'm blaming this post on Twenty-One. He sent me a photo today that had me in a lustful tail-spin, which prompted an extensive session of Google Image surfing...

It is no secret to anyone who knows me well that one of the things that makes a home for me is a number of choices when it comes to reading spaces. One of my frustrations in our current abode is that it is a fairly standard three bed layout with a single open living area. Ergo, if I wish to read in peace, that usually means sequestering myself in the bedroom because the TV is on in the living room... Very occasionally I will take myself out to our - admittedly - large terrace. IF the weather is being friendly - and we've had a rather uncertain summer season in Sydney this year, and IF my body is feeling up to extended time in an upright, plastic chair.

DB and I periodically go to open home inspections, more to remind ourselves that all this hard work we're doing will, eventually, mean that we can buy a house. Recently we found a house that we both fell in love with - it may have sold, I don't know. Neither of us want to find out really, because we found it way too early. Then there's the house DB fell in love with that I quite like, but I don't love it like the other one. Both of them have that ultimate feature - for me at least - which DB has looked at in both cases and remarked that he knows where he'd find me - the window seat. I have always loved window seats. It's the Anne of Green Gables in me. There are countless references in that book to her dropping onto the window seat of her gabled room, resting her arm on the window sill, and her chin on her arm, and gazing out to dream... DB's house has a fairly traditional, bench-like seat with bolsters at each end built into a big picture window flanked by built-in cupboards in the large, open informal living area. In the other house, it's the size of a small double bed, housed in a protrusion from the living space off the kitchen, with tall multi-paned casement windows on three sides with extra wide sills - once you're in there, you're really in there...

When I discovered straw-bale houses, one of the things that particularly charmed me about them - more, to be honest, than all the eco-benefits part of them - was that, by default almost, you can have window seats without even trying, in every window in the house if you like, because of the thickness of the walls, which is governed by the size of the bales of straw. Like this little corner nook: 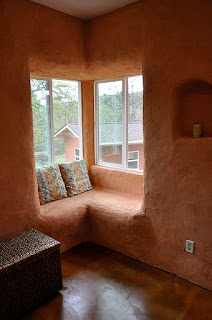 I love the earthy friendliness of it, and the informality that comes with the gently curved edges. However, to be truly book junkie friendly, a window seat needs books, which means shelving...so I gathered a collection of images that really spoke to me so I could share them around. After all, why should I be coveting alone?? 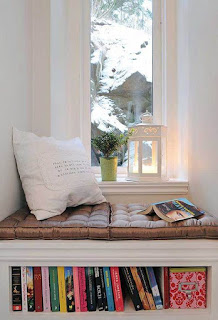 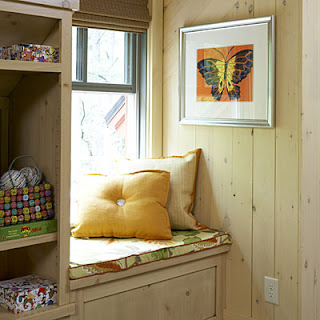 I like the little, tucked away feel of these. I think that's one of the things that appeals to me about window seats - they can be so very unexpected. In the second one, of course I can see a MUCH better use for those shelves...but that's really just a matter of re-stacking! 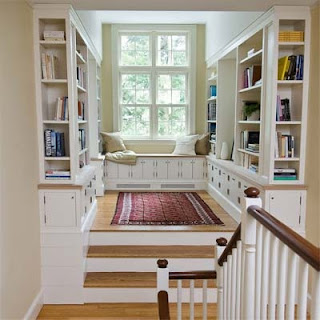 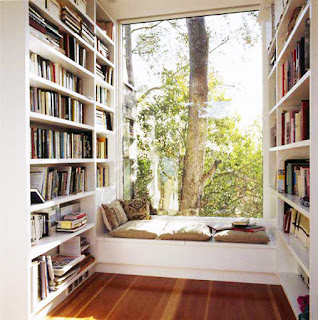 These two are very impressive. I particularly like the first of them, that's a landing and then some!! But I like the big, simple window in the second one, and that lovely tree.

However, here's the magnificent folly Twenty-One sent me. It is a folly, if you consider that a folly sums up creating something that is a complete indulgence. I do think I'll have to give serious consideration to creating something like this if DB and I ever build - although, I can see I'll have to be mighty persuasive, because there'd be a significant amount of space required. 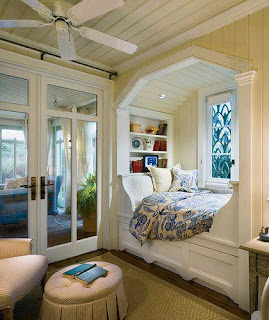 It's kind of the ultimate combination of cubby-house, window seat and private library. Irresistible, don't you think? Favourites, anyone?