Joy! The Internet is live so I am back to the computer - back to the freelance assignments...sigh...big ones to get done this week (think of the money, I hear my mother telling me...).

No further work on the books at this point, as I'm still waiting on the new wedges for the other two bookcases. However, I can get to the lower shelves I'm not happy with in a little bit when I need to get away from the computer. But, this is how I started out: 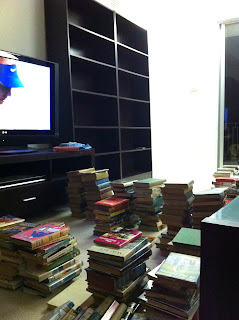 Those stacks are all in alphabetical order - the Ts had to go into two piles - Ethel Turner's books, published by Ward Lock, are huge! I remember buying a stack of them all from one shop once - turned out to be an expensive exercise.

As any confirmed book junkie knows, the correct stance in a bookshop - particularly second hand ones where you really have to comb the shelves - is to be angled about three quarters on to the shelves so you can stack the books on your outside arm as you pick them off with the inner one, head on one side to read the spines uninterrupted, and shuffle along - if you pick your feet up you run the risk of tripping over stacks of books on the floor or other book junkies squatting by the lower shelves. Well, Ethel Turner books pose a bit of a physical challenge with this posture... Based on my experience, I would advise chatting up the store owner so you can deposit your growing stack on the front counter. The nine or ten I found that day (riches!!) sent me to the physiotherapist for a very extended series of treatments because their combined weight on my left arm, couple with the tilt of my head pulled my neck badly out of alignment and the next day my head was completely immobilised. So, what should have been an excellent bargain - the books were really good prices, with a first edition in amongst them... - ended up costing me a lot of money!

But I digress... Here's where things are up to now: 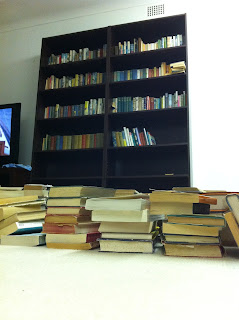 Most of the children's books IN! Although, since that pic was taken, I've found others in random piles that I've been sorting in preparation for the other bookcases. I also found some duplicates I didn't realise I had, so I have to try and sell them on - and create more room!!

Meantime, I've read my way through more Georgette Heyer - they're easy to spot in the confusion of the stacks, apart from anything else! I'm reading Black Moth at the moment and the underlying theme of the story had me thinking this morning. The chief protagonist is Jack Carstares, the latest Earl in the family who is, however, on the run, rather than being based in the ancestral home. Due to an incident in his youth where his brother Richard, deep into some heavily costly card playing marked some cards, but allowed Jack to take the blame. As a result, Jack was cast off by his father and shunned by his friends and has been many years in exile in Europe, while Richard, marrying the girl they both loved, is living in the ancestral home, caretaking it and miserably aware that he is to blame. He went as far as to confess to their father, who rewrote his will, reinstating Jack, but hasn't made it public knowledge that is was in fact him, not Jack, who'd cheated.

Now, the interesting thing for me here is that, because he was believed by the men at the card game to have cheated, he has been completely ostracised, cast out of polite society, written off by his father and left to fend for himself - penniless and friendless. It's a question of honour and the integrity of the man that is the chief factor. Then I think to today... Not so much in terms of the card games, but in other things. One of the reasons, I discovered in a conversation with sixteen, that kids don't read now - even required reading for school - is the existence of online precis of books, annotated with analytical commentary - shortcuts, or cheats, so that they can spend an hour or so studying those in order to get through any assignments based on those books. This isn't, I found out, considered to be cheating. This is, apparently, accepted practice. ...???...

Similarly, because so many books have been made into movies, many kids think that if they've seen the movie, they don't need to read the book. Then they wonder why it is that the marks they get for there assignments aren't what they were hoping for. We have a generation of kids who want everything instantly, have no idea at all of the concept of delayed gratification, and don't see the point of starting something that might take some time before it's done.

I'm soap boxing, I know, but this really riles me. It's not just books and reading - it's endemic across a number of areas. What the solution is, I don't know. I do believe that there are way too many shortcuts available, and we have made it, in may cases, way too easy for kids to skate along and think that that's an adequate way to tackle life. It doesn't do them any favours really, in the long run. At some point, they have to step out there on their own, and that's hard enough even when they have good life skills.

...and people scoff when they find me reading Georgette Heyer... The books themselves may be light easy reading, but it doesn't mean they don't make me think!! 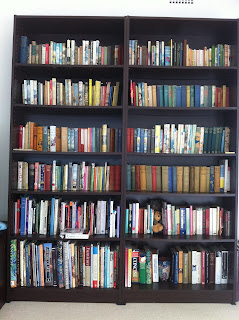 ALL the children's books, the art books, the biographies and the dictionaries... Took  bit of juggling. But they're in. And get a load of the cutest bookends ever: 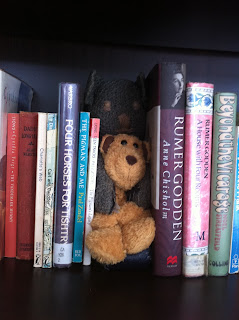 Gus and Wilbur - providing a buffer between the biographies and the kids books. Wilbur is kind of in the dark - but he's old and delicate, and that probably suits him. Gus likes to be out and about!
Posted by Kaz at 17:29