Well, they're all in - and they're all fitting better than last time too - I can't figure out why... I have my suspicions that there are some books not there - I know that Sixteen has a couple of them, those on that reading list that I owned that he's borrowed. So, they're not far away. 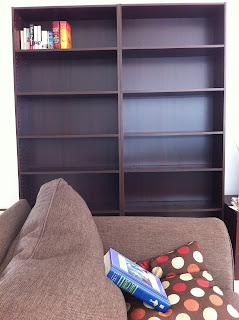 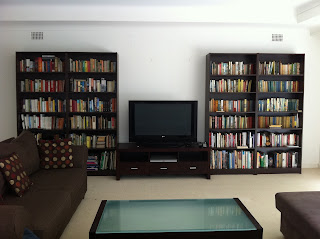 Don't they look nice??? Dearly Beloved just sat back on the couch - he's been working in the garden for hours, so has just flaked with a well-deserved beer - and said it looks nice with all the books along the wall... Yup!

Having sorted them all properly this time, I'm aware of some gaps. There are a couple of boxes that went into storage after the last move that shouldn't have, and I think I need to get brave and retrieve them. I know the first Dimsie book - from the series by Dorita Fairlie Bruce - must be in there, and Stephanie Alexander's A Cook's Companion and Claudia Roden's The Book of Jewish Food are in one of the boxes, and it's driven me mad not having them, particularly the latter.  I've had to go online to find particular recipes...but that's not helpful when what I want to do is sit and leaf through it when I don't really know what I want to cook until something jumps off the page at me... There has to be a trip to the storage place anyway, so I will retrieve that box...

Now - three of the books in my last post have gone - Little House on the Prairie, Three Little Maids and White Boots. So, if anyone had been thinking of buying them - it's too late!! So, the moral of the story is, stop thinking about it and just do it....! Just to spark some interest, a couple of grown up books to add to the mix that were duplicated. Same deal as the kid's books, so get in touch me via this blog or my Facebook page if you're interested:

Kerry Greenwood, Trick or Treat, Allen & Unwin paperback, 2007, excellent condition
The fourth in the series, featuring baker Corrina Chapman and her Israeli PI boyfriend. For those unfamiliar with these books - you WANT this...and then you'll have to go get yourself the others. Set in Melbourne, with a madly eclectic cast of characters, these are modern mystery stories that are just delightful. Bonus is, there are always recipes at the back of the book too!

Faye Kellerman, Serpent's Tooth, Headline paperback, 1997, good condition
One of the Rina and Peter Decker series of police mysteries - these are good fun if you're looking for a mystery with a bit of a difference. The Deckers are Orthodox Jews, he's in the LAPD and the clash between the two worlds is often the thing that makes these that bit more than a standard murder mystery. Good stuff.

Re Sixteen and books - priceless, this afternoon. He arrived laden with all his back to school gear, since school starts again next week, which included a not insignificant collection of books - novels... It was with much delight he showed them off, asking if I'd read them - I'll have to be borrowing books from him at this rate! I made him laugh when I suggested that soon he might need a bookcase of his own...he says that's very true. I think it's a clear case of corruption, because I sense it's starting to go beyond the having to read them for school thing - he's starting to eye particular books on my shelves and ask about them, and is responding positively to some that I've suggested he might particularly like. Watch this space....
Posted by Kaz at 22:14