I had my first real binge of book buying on Friday morning. In amongst the books was this one - the cover attracted me first, and then when I read the synopsis I had to include it in the pile. I'm a sucker for good historical fiction, especially historical Jewish fiction.

I spent six weeks in Israel in early 2008, and was fortunate to have many opportunities to travel a lot of the country from my base in Jerusalem. Israel is a place where the history is very present. Every new building site must have an archeological survey done prior to the commencement of the build, and invariably, those digs produce yet more artifacts that fill gaps in the known history. In the week between the two programs that took me to Israel, a friend came from London to traipse around the country visiting some of the places the courses wouldn't take me.

One of those places was Masada - King Herod's mountaintop fortress in the desert, overlooking the Dead Sea. It was an incredible day. We, with a friend from my first course, booked a cab driver for the day who took us first to Qumran, the site where the Dead Sea Scrolls were discovered - evidence of the community of Essenes, a hard line sect of Jews who chose to live apart from the mainstream communities in order to practice their very strict form of Judaism. From there, we went on to Masada. It's one of the many places in Israel where I felt that the barrier between present and past was very thin, and my sense of the people who lived their last days felt very present. Perhaps it was because of the manner of their deaths, and that they'd not been accorded proper Jewish burial rites, perhaps it was the proximity of the Roman army camps that can be seen all too clearly from the walls of the fortress in the desert below. I don't know. But all three of us felt it. My London friend and I had been choristers together in our Sydney synagogue, and we sang Eli Eli in the depths of one of the cisterns - it felt spooky, but right, hearing our voices spin in the perfect acoustic of the underground space, and is one of my favourite memories of the day. We wound up at the Dead Sea - IN the Dead Sea, floating in the salty water - a bizarre, but wonderful experience. 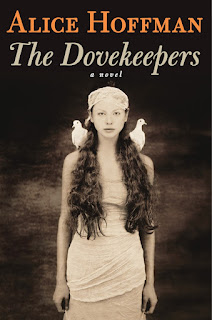 Hoffman's The Dovekeepers is a fictional recreation of the period that begins with the destruction of the Second Temple, the sacking of Jerusalem, and expulsion of Jews from Jerusalem and ends with the mass suicide of those left on Masada when the Romans manage to breech their defenses. The records show that there were seven survivors - two women and five children. The book traces their stories, weaving contemporary research with what is known - primarily from the history written by Josephus, a Jew who was a Roman soldier and historian, who wrote the only contemporary account of the siege.

The narrative begins and ends with Yael, daughter of an assassin of Jerusalem who, with her father, leaves the city in the wake of the destruction of the Temple. She has lived a solitary life, unloved by her father as her mother died giving birth to her. Resembling her mother, she can only cause her father pain. But in her solitude she finds her strength, an inner stillness that enables her to disappear in the desert and find an affinity with the birds and animals there. They leave with another family, the head of that family also an assassin, a colleague of her father's. Her brother, who'd followed in their father's footsteps, has long gone, and their aim is to find him again. The other family eventually fall ill and die, just before an envoy from Masada find them and take them to rejoin their son and brother.
They find a highly organised community, surviving due to the nature of Masada's construction. Herod, for all he was a weak and corrupt king, was a highly gifted architect, and Masada is a marvel, still, of his very clever solutions to making a mountaintop fortress sustainable. Among other things, a large flock of doves are kept, to provide both food and manure, and Yael is sent to be part of the group of women who maintain them. She meets Shirah, with her daughters Aziza and Nahara, also dovekeepers, and Revka, who cares for her grandchildren. Both women have pasts littered with tragedy, and tangled reasons of how and why they ended up on Masada.

Revka takes up the narrative after Yael, complete with the story of how she, her daughter and her husband with their two small boys start out towards Masada, and are then set upon by Roman soldiers while they camp in an oasis. Revka's daughter dies in the encounter, the two boys become mute following the trauma of seeing their mother die, and Revka remains traumatised after killing the soldiers. Her son-in-law, who was in the desert saying the Yom Kippur prayers, is devastated, but shuns any form of comfort from Revka or his children. Revka tells then of her growing bond with Yael as she learns to understand that Yael too, has learned the gift of silence through trauma, and is more than she appears to be. Both of them learn to trust Shirah, who is a practitioner of the now forbidden practice of Jewish witchcraft.

It is Shirah's daughter, Aziza, who is the third voice in the narrative. Shirah, a girl whose mother is cast out of Jerusalem aged 13, with the newly born Aziza. She finds sanctuary in the east, with the Moabites, and a man who teaches Aziza to be a warrior. Aziza's younger sister and brother are born to this man, but Shirah takes all three back into Judea, and Masada, answering the call of her first love, Aziza's father Eleazar, who is the leader of the rebellion there. Aziza's struggles are primarily with her identity - born a girl, she lived as a boy with the Moabites, but is turned back into a girl when they reach Masada. Her mother lives according to the lore of kedesha - outlawed Jewish witchcraft - and the notion that everyone has a specific destiny, or fate, her own having said that anything she loves will be destroyed, so that she withholds her love from Aziza, hoping to protect her from her destiny.

The final stint of the narrative falls to Shirah herself. Shirah, who is destined to never leave Masada, and ultimately gives her own life that her last child can be saved - the baby she bears to Eleazar, the leader of the rebellion, her great love for whom she forsook her Moabite lover and the chance that her other children could survive. In the end, it is only the newborn baby that survives when all but Yael, Revka's grandsons, Yael's son, and the abandoned Essene boy escape with her, after all the other occupants of the fortress die by their own hand rather than surrender to the Romans to become enslaved.

In the epilogue, Yael looks to a future for those survivors, all the time yearning to return to Judea, and Jerusalem in particular. History tells us that it would be more than 2000 years before that was to happen, with the creation of the modern state of Israel in 1948. In the intervening time, Islam was created, and during a period of Muslim rule, the Al Aqsa Mosque was built on the Temple Mount, leaving only the Western Wall of the retaining wall of the original structure accessible to Jews. While there are religious Jewish zealots who would see the mosque torn down and a third temple built, the ramifications of that don't bear thinking about, and in any case, rabbinic Judaism has moved on from that time of animal sacrifice, and the Temple practices of old would hardly be appropriate in the modern world.
Hoffman lists a solid stack of resources she accessed in the writing of this novel. The mesh of known history with fiction is seamless, and the details of Jewish daily life of the time is beautifully observed. Another pair of books of the period that are as good, which are about Jewish witchcraft, are Maggie Anton's books Rav Hisda's Daughter - in two volumes - set in ancient Babylon and Israel. She goes into a lot more detail about ancient magical practices and women's spiritual life ofcthe time. Rav Hisda's daughter is mentioned in the Talmud - the books of discussion on Jewish Law - Rav Hisda himself was one of the ancient Talmudists.

Masada remains one of those historic sites that have the capacity to raise goosebumps when you visit. The sense of those many hundreds of people facing down certain death is very present, and it's chilling to look down on the remains of the Roman camps and see just how close they were. We were pressed for time the day we visited, and ascended and descended the mountain via the cable car. I'd like to visit again and make the climb up the pathway that traverses the side of the mountain, to have a better sense of the daily reality for those long gone occupants. And to have more time just to spend there than the couple of hours we had in 2008.
Posted by Kaz at 19:56