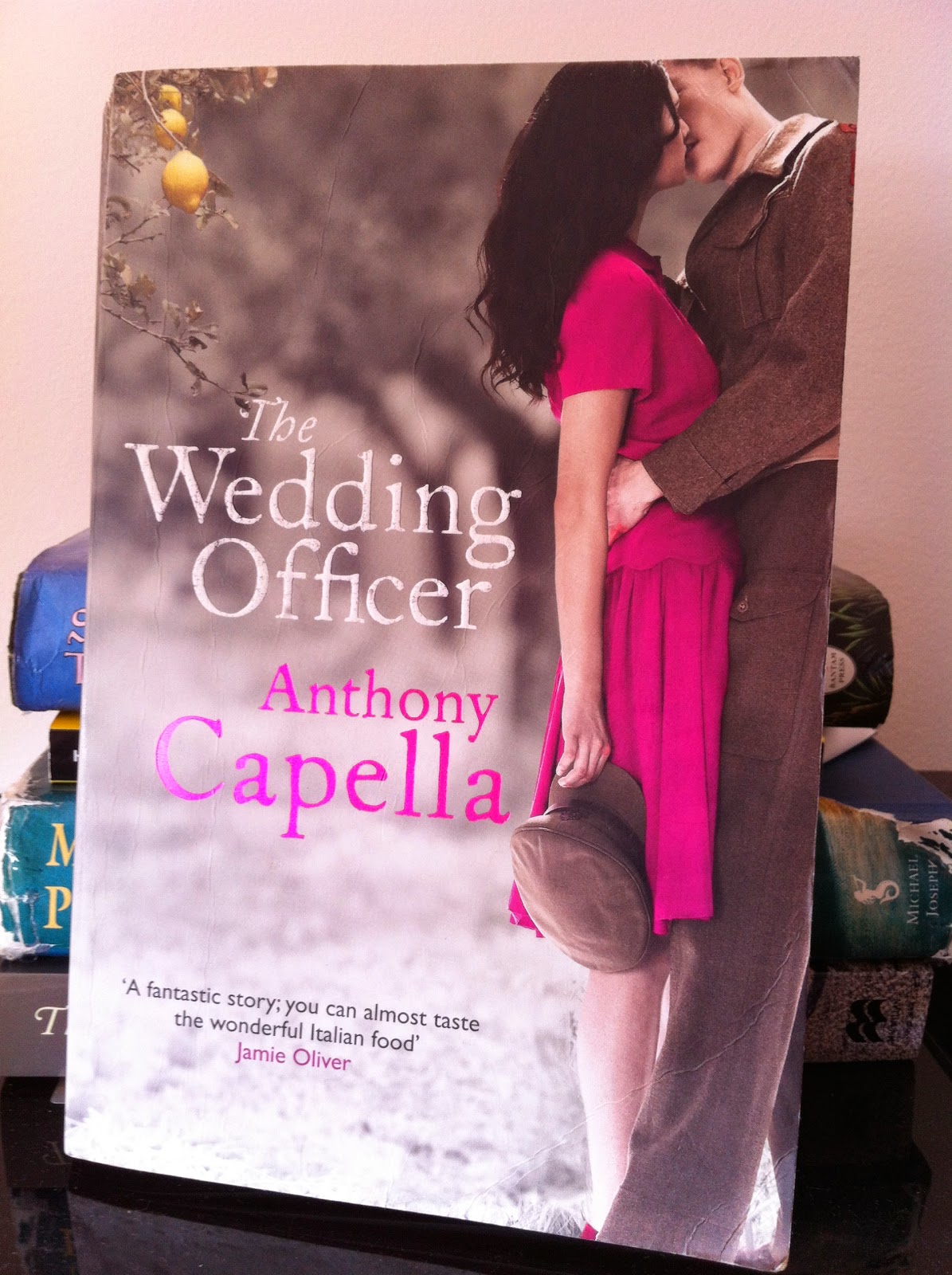 This is the first cab off the rank in my self-imposed Book Bingo challenge - a book set on another continent. It's the second book by Anthony Capella, his first being The Food of Love, and you can read my post about that one here. Again, it's a food related romance set in Italy, but it's a beast of a different colour.

The Wedding Officer is set in Naples towards the end of WWII - the Allies have moved partway into Italy, but still have some way to go in beating the German armies and ending the war in Italy. In Finisco, a village on the slopes of Vesuvius, Livia Pertini, the cook in her father's osteria, meets Enzo, a young Italian soldier, during the local apricot festival. Although many of the local boys have been vying for her hand for some years, she has sidestepped their advances. Enzo, however, manages to get through her defences and she, with the blessing of her father, marries him. They move to Naples, and live with his mother and sister. Enzo is sent to the front, and Livia, unable to work, eventually goes back to her father, where it's safer. Despite her urging, Enzo's mother and sister stay in Naples.

Meanwhile, Captain James Gould, fluent in Italian, has been sent to Naples to take up the post of wedding officer. His job is to vet all potential Italian war brides for authenticity, making sure they're not just starving prostitutes looking for the easier and more secure life on British army pay. He arrives to a shambles of an office in an old palazzo, shared by American Intelligence, and a 'local' way of doing things that horrifies his straightforward British sense of how things should be done. He learns how to tell if a girl is earning money through prostitution, and vetoes several applications. He also gets caught up in chasing down black marketeers and Mafia men stealing penicillin from American and British bases. In a short period of time, he manages to alienate nearly all the people he has to deal with, including his CO. In one of his raids on the mountain villages in response to reports of a German tank being sighted, he comes face to face with the tank, being driven by Livia, who has found it and commandeered it to use as a tractor. Their exchange is short and sharp, but for James, memorable.

Back on the mountain, a local Mafia man who has long lusted after Livia begins to pursue her. Food is short, the war is dragging on, life is getting very very difficult, but she holds fast to the hope that Enzo is coming back, and is, in any case, revolted by him, and refuses his advances. In the end, her father and sister tell her she'll be safer back in Naples, so she heads back to find her mother and sister in law. Arriving, she discovers they've been killed in a raid. By then, she has also found out that Enzo has been many years dead on the Russian front. Homeless and exhausted, she goes from one place to the next trying to find work, but can't. Ending up at a black marketeer's restaurant, she is given food and the manager, who has been trying to work out how to get James back to his predecessor's ways, decides that installing Livia as the cook in the palazzo might solve the problem - the idea being that with a full, contented stomach, James will be more relaxed in his dealings with the locals.

In due course, she starts cooking at the palazzo. The shift in culture there is immediate. James recognises her as the girl from the tank, and slowly but surely, falls in love. She's prickly and elusive, but eventually responds to him. Then the beginning of their troubles starts - the Mafia man who had been pursuing her is James' contact for the next raid he's planning, so Livia's hiding place is discovered. Next, while she's on a visit to see her family, Vesuvius erupts - a long predicted huge eruption. James, thanks to warnings from a local scientist discounted by everyone else, has put plans in place, and by and large, they work out and most people are saved. However, as he's trying to get to Livia, he is diverted to the air base on the mountain, who have been out of contact, so they can be warned to get their planes off the ground before the volcanic hail damages them beyond repair, and then is unable to get back to Finisco for some time. Unknown to him, Livia's father was injured when a lava flow came through Finisco, and Livia, in order to get the necessary penicillin to save his life, is forced to go to the Mafia man, who demands sexual favours from her in return. Her father's life is saved, but Livia feels she's lost all hope of any future with James as a result, so when James does finally get there, she turns him away, following up with a letter saying she's ending it.

The Mafia man then pulls his nastiest trick when he finds that regardless of his feelings for Livia, they will never be returned, and has her sent to the Germans as a whore with a group of other women certified as infected with STDs - a plan concocted to undermine the German troops. James finds out too late to stop the boat leaving, and immediately requests a transfer to active duty so he can follow the Allied push and find her. Livia and the other women escape when their boat comes under fire, half staying put where they come ashore, while Livia and a couple of the others set out to walk back through the front lines to Naples. It's not until James reaches Rome and is able to scour the German brothel records that he discovers she's never been there and his search starts again. Eventually he hears through a contact that she's with a partisan group, and is parachuted in with a drop of weapons and they are reunited.

It's not a totally happily ever after ending, because the war setting precludes that, but there is a resolution that works. There is some of the whimsy in this book that characterised The Food of Love, and the common theme of communicating via food is very much a part of The Wedding Officer. It's perfectly possible to recreate various dishes from the detailed descriptions in the narrative, so that's an added pleasure beyond the reading. However, the darker undertones that come from the war setting and Mafia complications make this a different kind of read to the first one. It also has quite a different pace to the other book - periods of intense urgency contrasting parts that are slow and gentle, that I really wasn't in any hurry to get past. There is considerable humour to balance the darker moments, and utterly authentic Neopolitan slang, with accompanying translations!

Definitely an enjoyable book that I'd recommend to anyone with food interests, a love of Italy, or just a good, entertaining read.
Posted by Kaz at 00:43