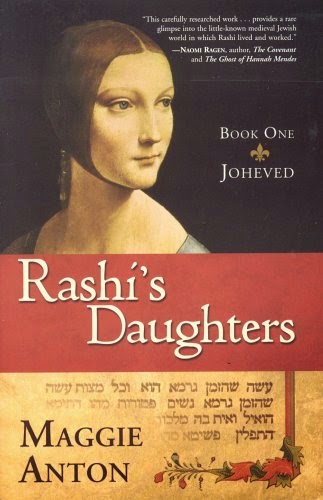 Book two in the book bingo challenge: Rashi's Daughters - Joheved, by Maggie Anton, for the first book by a favourite author category. My copy of this book is SO dog-eared! I guess that more than qualifies it as a favourite, given it got that way from frequent re-reading.

Rashi (1040-1105) - a Hebrew acronym for Rabbi Shlomo ha Yitzhaki - is one of the greatest of the Jewish sages. The first Hebrew book to be printed was his Bible commentary, and his commentaries occupy  the inside column of ever page of the Talmud, surrounded by later commentaries by his disciples and grandsons. He lived in France in the middle ages and founded a yeshiva in the city of Troyes when he came home from studying in Germany after his mother was no longer capable of running the family vineyard alone. At that time, the tradition - as is still the case in the Orthodox Jewish world - was that only boys studied Talmud - Jewish Law. However, Rashi had no sons, just three daughters, Joheved, Miriam, and Rachel. Against their mother's wishes, in response to their interest and his need to teach prior to establishing his yeshiva, he began to teach his daughters. There is also the suggestion that all three girls wore tefillin (phylacteries) when they prayed, also traditionally only worn by men.

There were precedents for these three girls to both study Talmud and wear tefillin. It is said that Michal, daughter of King Solomon, wore them. There are also previous female scholars, one of the most well known being Beruriah - who lived in the second century CE - daughter of Rabbi Chananiah ben Teradion, one of the Ten Martyrs killed by the Romans to prevent the teaching of Torah. Rashi's own commentaries also lend support to the idea that his daughters were both scholars and possibly wore tefillin. He was, at heart, a pragmatist. One of the responsibilities of Talmud scholars is to interpret both Torah and Talmud - the ongoing discussion on Torah - to make rulings on how things should and shouldn't be done in contemporary times. Rashi's time, Medieval France, was a time of prosperity for Jews, particularly Jewish merchants, who travelled far and wide, and congregated at the great fairs twice a year to trade. Relations between Jews and Christians were cordial, but cautious. Troyes, in the Champagne district, was a busy centre of trade, which saw travellers and traders of all nations, with varying customs intersecting and interacting. Rigid interpretations of the laws could have alienated relationships at best, and at worst, caused deep schisms. Rashi's commentaries indicated that he was a man who thought carefully and broadly about various aspects of any given laws and sought to come to positions that would best serve his community in the long term.

There is nowhere in Torah that states that women are forbidden to study, or to wear tefillin (a time bound mitzvah). Discussions in the Talmud move around the issue, with different commentators all offering differing views. Where they agree is that when it comes to time bound miztvot - i.e. those that must be done at certain times, like morning prayers (when tefillin are worn) - it may be difficult for women, especially once they have responsibilities for a household and children, which may prevent her from meeting the time bound requirements. Therefore, women are exempt from having to honour those mitzvot, while men are required to. That has come to be interpreted by Orthodox rabbis to mean that women don't, and shouldn't, observe these mitzvot. There is, in fact, an argument that comes up in this first volume of Anton's three part series (one book for each of Rashi's daughters) that suggests that the more educated women are in Torah and the Law, the better they will be able to observe them and pass them on to their children, so why not allow them to study the same as the boys.

Anton has fictionalised the history of Rashi, his family, students and descendents, filling in the gaps left in the commentaries, histories and documentation. Careful research has resulted in an incredibly rich book that gives a wonderful insight into the lives of Jewish women in Medieval France. Joheved is portrayed as a bright, conscientious girl, who has been taught by her grandmother, Leah, to manage the finances of the family vineyard, in addition to creating a good vintage. She is proficient at spinning - remembering that this is before spinning wheels, so girls and women habitually carried a drop spindle and spun at any odd moments throughout the day in order to create enough yarn to weave into cloth for family garments and household linens. In this time of arranged marriages, she begs her father to find a scholar for her to marry, someone who will appreciate her knowledge and not prevent her from continuing to study. Her wish is fulfilled with her marriage to Meir ben Samuel, younger son of a Jewish lord and sheep farmer, who was once a study partner of Rashi himself in Germany. They go on to have six children, including four boys, all of whom are scholars, and some of whom became revered in their own right for their scholarship.

Anton has, quite rightly, been lauded for her Talmudic scholarship, which is hugely evident in these books. If you've ever wanted to dip your toe into Talmud study, but have been scared to try, Joheved will give you a taste, as there are Talmudic discussions and arguments sprinkled liberally throughout the narrative. It's one reason I keep going back and re-reading this book and the other two - Anton's scholarship is formidable. I love a good story too, so writing these as historical fiction opens them up to a much wider readership than, perhaps, a pure history might have. It has also enabled Anton to fill in the gaps and unknowns in the history of Rashi's daughters as much has been lost through lack of documentation, as is the case for so much of women's history.

The books are available online and in selected bookstores - but don't try and find them in mainstream chains, because they won't be there! I got mine at Gold's Judaica in Bondi. They're a bit addictive. I can't read Joheved without wanting to keep going and read the other two (I'm halfway through Miriam now...). Anton has already published the first of a new trilogy Rav Hisda's Daughter - Apprentice, and the second in that series, Enchantress, is due out later this year. They're set in Babylon after the expulsion of the Jews from the Holy Land by the Romans after the destruction of the second Temple in 70CE. Again, another scholar...lovely stuff.
Posted by Kaz at 23:43