Well, a change of pace was becoming necessary after weeks of re-reading vintage children's literature. Hannah Kent's Burial Rites has been on my 'must get' list for quite some time, and a change of pace it certainly was. A change of just about everything. I've literally just finished reading it, as I begin to write this post, and my head is still chockablock full of images that Kent's magical, succinctly elegant prose created as I read. I found myself deliberately putting the book down - stopping reading so that I wouldn't finish it too soon. Believe me, this is not a usual practice of mine. Normally, a new book is something that I gobble up, and then go back and read slowly a second time. Small note - the Icelandic names are full of accents and blogger doesn't offer me the option of inserting them...apologies. 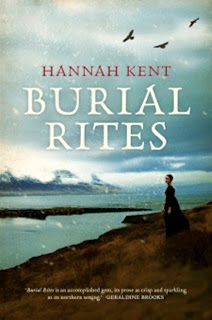 Burial Rites tells the story of the last person executed in Iceland, Agnes Magnusdottir, for her part in the murder of two men. It is based on a true story, one which I gather has gained semi-legendary status in Iceland, which Kent first became acquainted with while she was an exchange student there during high school. Three people were implicated in the crime - Agnes, another maid on the farm, Sigridur Gudnundsdottir, and Fridrik Sigurdsson, a youth from a neighbouring farm - the latter not well liked by one of the victims. In the final judgment, Agnes and Fridrik are sentenced to death by beheading, while Sigridur eventually has her sentence reduced to life imprisonment in Denmark.

The case is full of circumstantial evidence and back stories about old histories, enmities and complex relational ties between the protagonists and their neighbours. The social system of Iceland at the time also comes into play - almost as another character. At the time it was a complex hierarchy of local organisations, headed by both parish and civil leaders, all of whom were answerable to those next up in the chain. People were landowners, farmers, farmhands and/or maids, or paupers reliant on the charity of the parish for placement into families. People move around the area from farm to farm for various reasons, and while the roles they play on any given property might be clearly marked, they all live together in small dwellings, often sleeping in the same room - owners and their families, servants and charity cases. The status of different individuals becomes a critical point in understanding the details of how anyone in particular might end up where they do - for instance, Agnes, illegitimate child of a maid, left by her mother to the mercies of the parish at age six, from the outset has almost no chance of moving into one of the other social positions. That she is intelligent and literate becomes, almost, another strike against her. Once condemned by the legal system, she is viewed as a pariah, a witch, something evil that can taint anyone who chances contact with her, and fluttering around her are stories from her childhood and youth that are brought up again as people within this highly close-knit community try to reconcile themselves to the crime within their midst and the people involved.

So, imagine the horror with which the family of Jon Jonsson receive notice from the district commissioner that Agnes is to be sent to them, to be consigned into their custody until such time as the execution can be arranged. Jon is a district officer. He and his wife run a smallholding with their two daughters, Lauga and Steina. They are surviving, but not living in luxury, and Margret, Jon's wife, is ill with a lung disease exacerbated by the deteriorating state of their croft, that will see her die too young. They are also informed that Agnes has requested the services of the Reverend Thorvardur Jonsson (Toti), a young assistant priest, son of the priest in a neighbouring district, as her spiritual advisor.

I found the whole concept of 'incarcerating' a condemned prisoner within the bounds of a private home absolutely mind-boggling. As do, clearly, the members of Jon's family. However, in a community whose judicial system originates in Denmark, and who have no police, as such, or prisons, it's the only option. Jon, as a district officer has no option but to comply, when ordered to do so by his immediate superior. Agnes herself is all too aware, when she arrives, filthy, emaciated, lice-infested and exhausted, that she is the last person this household wants to invite through their doorway, much less have amongst them for the ensuing months. Lauga and Steina, very different in character are alternately appalled and intrigued - the former reaction being prompted, mainly, by the thought of the stigma that could be attached to them by association with the criminal. Jon and Margret counsel both girls to go about their business, Jon, particularly, stressing that it is a matter of duty that cannot be shirked, and they just have to get on with the reality of Agnes in their midst, but to maintain their distance. Margret is initially hostile, appalled and fearful. Fearful that many of the rumours flying around about Agnes' inherently evil and vindictive nature might be true and that her family, particularly her girls, could be at terrible risk. The immediate thought any reader might have of, why not just run, is quickly disabused as the narrative delivers an inexorable picture of both the nature of the community - within which there is no place to hide - and the totally unforgiving location, which offers even less in the way of possible refuge.

Of course, people are complex creatures. All of us. And I think this was one of the primary underlying motives behind the writing of this book and retelling Agnes' story. Living in such close quarters, barriers are, inevitably, broken down. When the young priest, Toti, comes, he discovers that despite his youth and inexperience, Agnes has asked for him in particular as she has met him before and feels a connection - and, I think, understands instinctively that he won't push the fire and brimstone redemption package at her that she's previously experienced. His father, learning that he isn't preaching to Agnes, or focusing on reading her the Bible, takes him to task, but Toti comes to understand that, for Agnes, the only way to reconcile herself with her fate is to allow her to find her own path, with him there to provide a constant.

As the autumn harvest comes to and end and the weather begins to close in, the family and other members of the household are forced even closer to each other, spending the bulk of their time inside the house, in the badstofer (bedroom, I assume - a communal, dormitory room where everyone sleeps). Toti encourages Agnes to speak, and slowly, as she begins to trust him and understand that he will just listen and not pass judgement, her story emerges.

It is the tiny details of this beautiful book that stand out. Kent's text is spare - there are no superfluous words anywhere. For all that, it is far from stark or barren. It conveys, magnificently, a sense of the brutality of the environment in which the characters must survive - a place where everything that is arrange by date carries a contingent, 'or the next day the weather permits' - a caveat that even appears in the written orders for Agnes and Fridrik's executions. There is a sense of fatality that comes through in the character of the people, an inevitability about the course of their lives. Roles are clearly marked, social stations are understood, but at the same time there is also an understanding of temperament - that the conditions, the climate, the harshness of their lives, can and do have an effect on peoples' emotional stability. There even appears to be a certain level of allowance made for this at times - a bit like the weather caveat...someone in a rage will be left to themself until they're calmer before anyone tries to deal with them.

The narrative is woven together from historical documents, earlier research into the case, interviews and Kent's fictional elements. Kent is quite frank in her intent - while fascinated, haunted even, by Agnes' story, she sets about to deliberately offer up an option that allows us to question what actually might have happened the night of the murders. In the time since the murders and executions, the tale has become part of Iceland's folklore, and like all legendary tales, has many variations and many perspectives as to what may have happened, who did it, and why. Kent explores the imagined inner lives of the people closest to Agnes during that last season of her life, as well as that of Agnes herself. She calls the book her 'dark love letter to Iceland', hoping that in her telling of the story, she has created something she can gift to the country that provided her with the inspiration for this magnificent debut novel.

I found this book to be absolutely gripping. I wanted to keep turning pages to see what happened next, but at the same time I so did not want to get to the end of the book too soon. I rarely have that kind of conflict, so it was yet another challenge provided by this already challenging read! The pace is deliberately slow, and it spins out the further you go into the narrative - the more we learn of Agnes' story, and the more the relationships shift and change, the more the little everyday details and exchanges become of paramount importance. Kent's treatment of this is masterful - there is no sense of the story being dragged out. I found the opposite - I wanted to know more. I still want to know more. But there can be no sequel. Agnes Magnusdottir was executed in January 1830.
Posted by Kaz at 17:33