The Perks of Being a Wallflower - Stephen Chbosky

This is one of those times where I was introduced to the book by a movie trailer...stumbled across the book in one of my bookshop crawls and bought it, read it, have yet to actually see said movie version and the other night when DB saw it on the T-Box movie list, actually suggested he NOT download it that night on account of him looking, at that point for something light - and having read the book...this is not light material, and the movie trailer is somewhat misleading... 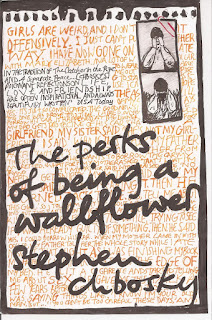 Let me start by saying that I really loved this book. There was much about it that was quite unexpected. I wasn't expecting it to be in epistolary style...and even that had a twist because the letters - although written as letters - are more like a diary. This reminded me of John Marsden's Letters from the Inside - and that sense became stronger the further I read. There are some quite clear parallels between the two books.

The inner lives of teenagers are providing much fodder for writers, particularly teens who are on the perimeters of teen society. In this case the protagonist, Charlie, is something of an anomaly - the things that make him 'different' only become obvious by degrees through the story. He suffers quietly, an exceptionally bright student with social issues...this is the first indication that there's something a little different about him. Then his lack of friends among his peers...and being picked up by an older crowd at school. And then comes his relationship with two individuals in particular - a brother and sister who are not, in fact, actual brother and sister - being steps an a blended family... He falls desperately in love with Sam but because she is pretty, older, and popular, never dreams that she could think of him that way and, as it happens, in a conversation at one point during their friendship, she suggests that he shouldn't feel tat way about her. Charlie has a teacher who has great faith in him - seeing beyond the issues and social ineptitude, feeding him an extended literature course to try and broaden his exposure to life via a, perhaps, gentler means than simply throwing ihim out in amongst people - which is how school works of course...and which Charlie avoids.

Then there is Charlie's family. They're a pretty regular, apple pie kind of American family - on the surface. Mom, Dad, three kids, nice house, etc... Charlie's the youngest. He gets on well with his older brother - who is leaving for college. He's convinced his sister hates him - his sister is at the age where being different is totally toxic so she is hugely challenged by Charlie and is constantly on the attack - while at the same time, desperately needing an ally against The Parents within the household and Charlie is her default ally... His parents struggle to deal with him - don't really get his brilliance because they're more preoccupied with the things about him that make him odd. There is mysterious Aunt Helen - who is at once fairy godmother and black sheep, but no one really knows why...the kids, at least.... Family gatherings with the extended family on both sides are fraught in different ways. There is always a sense of secrets being kept.

Charlie goes through many of the typical teen rites of passage in the course of the book, albeit with significant twists. There is always something a little unexpected and it's always a little - sometimes more than a little - dark and twisted. This is not light reading. It's a teen novel, but it's not a pretty story really. There are redemptive moments, but if you're going to read it, be prepared to find yourself having quite disturbed moments. Seventeen has read this one, and agreed with my assessment when we had a brief conversation about it.

It is very well written and I really didn't want to put it down. at a bit over 200 pages of smallish font, it was a fairly quick read. Engaging, surprising, and left me thinking. Recommended.

Must get around to checking out the movie adaptation...
Posted by Kaz at 04:12