Catcher in the Rye

Well, despite a ridiculously crowded work schedule that has resulted in the least time I've ever had to read regularly, I'm nearly finished Catcher in the Rye. I have to confess that part of my initial reluctance to get going with it was due, probably, to the less than happy memories of studying it at school. However decades later, it's a very different reading experience. 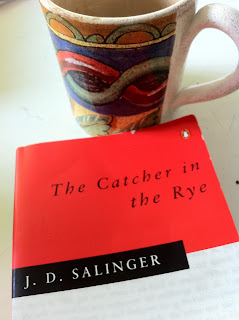 It occurs to me that the mug of tea is probably singularly inappropriate, as Holden is as likely to drink tea as he is to find life engaging and amusing! However, lacking his preferred Scotch, my tipple through much of the book was tea.

My epiphany with the book came the day I was reading it in the living room one day when Sixteen was home. He's studying this book, remember, and appears to dislike it as intensely as I remember disliking it at his age, or a little less... He walked through the room while I was laughing at a particular passage - I can't remember which now, as I've laughed and chuckled all the way through reading it. He asked me what I was reading so I flipped it up to show him the cover and his jaw hit the floor - "and you're laughing???" I told him that as an adult, it was a very funny read, particularly an adult who has brought up boys and is living with one with a similar background to Holden's. He still didn't get it, so I told him to keep his copy and read it again when he had a sixteen year old boy of his own living in his house. He gave me a very dark look and exited.

The thing is, about that age group, and boys in particular - bearing in mind the three I've lived with and countless others I've taught, including my current student who is also studying this book - is that they know that they are the most interesting creatures in the universe... They know that everything they have to say is both important and witty. They know that anyone who is anyone should want to listen to them endlessly rabbiting on... The reality is, from an adult point of view, that their world view is usually very limited - because they are the centre of their own universe and the majority of their time is spent studying themselves. They study what they have to at school, but rarely take themselves beyond the bare minimum. They take themselves so deadly seriously. When they get together, they talk at each other about themselves. The advent of social media sites like Facebook means that those of us who count some of this group among our friends are privy to the most unbelieveable - at times - collective drivel.

J.D. Salinger portrays this, in the character of Holden - his opinions, his attitude, his 'blow the world, I know better' march through this phase of his life - absolutely accurately. There are just enough moments where he lets us, the reader, see Holden's vulnerabilities, his frailties, and his fears to allow us not dismiss him as a complete tosser, but as the boy he is, as all boys that age are.

My friend who requested a personal mention on this blog - and is now, by default getting another one - spoke of this book as one of many we were given at school about 'teenage angst'. In working through this book with my sixteen year old student, and having the odd casual conversation with Sixteen at home about it, I am seeing it more broadly than that. For starters, when it was published, the 'teenager' - as we understand them - didn't really exist. There were children, and then once children left school and entered the workforce or went to university, they were adults. Young adults, to be sure, but adults. There was no recognition of this period of teens that we now acknowledge, complete with a culture and a somewhat specialised set of issues. That being the case, what we have in this book is the embryonic young man struggling to meet the expectations of his parents, struggling to cope with the grief he still carries about his younger brother's death, and telling us about it via the stream of consciousness inane chatter that you have to plumb deeply to find the small gems of substance - just like today's sixteen year olds.

Interestingly, my student, who is a very different beastie to Sixteen, got it when we discussed this after he asked me how it was to read the book again as an adult. He has a knack for distancing himself from himself and looking at himself fairly objectively when called upon to do so. So, rather than another dark look when I gave him my thoughts about the portrayal of young men Salinger-style, I got a wry smile...
Posted by Kaz at 23:53