Dearly Beloved has started some contract work this week with very long hours. So he was gone this morning before I was up and I have come home from work, shopped en route for dinner things, made said dinner and have just had a phone call to say he's still going. Sixteen isn't here tonight, so I have an empty house, control of the tv remote (NO junk TV!!!) and my book....

Which, is, sad to say, none of the things I should be reading. Although, given that I am not studying for anything, having an attack of the shoulds about reading matter seems a bit daft really. In amongst the current stack of books I've been reading is a much loved book that goes back to my primary school days when my financial skulduggery was always motivated by books. I have a vague memory of being sent to buy something at the local shops by my mother - can't remember quite what, I just remember it was during my primary school years - and 'losing' the money... A little while later, I miraculously had enough funds to put an order in from the latest Scholastic Books catalogue (anyone remember those?). Then there was the extremely sticky conversation with my mother who spotted the stack of new books... I don't have an innately criminal mind, unfortunately, and sins like this usually caught up with me pretty quickly. However, having a book junkie for a mother, I didn't lose the books themselves - she punished me in other ways - and this particular book was part of the bounty on that particular occasion.

The Far Distant Oxus, by Katherine Hull and Pamela Whitlock, is one of those classic children's adventure stories and I adored my copy, which was a paperback that very soon became very battered. Three children are sent to spend their school holidays on a farm where they are given a pony each for the duration. Very soon, they meet two local children and a mysterious boy who lives on the moors - and then starts the adventure...befriending a local wild mare and her foal and rescuing them from a roundup; building a hut in the woods as headquarters; a magnificent expedition down the river to the sea that lasts for a week; bonfires on the hills to finish up....and I wanted, every time I read it, to be able to climb into the book, choose my pony and join them!

Years and years later, I - the totally never-join-groups type - joined a book club (that's a whole other series of blog posts that I'll probably get to some time...) and met a group of amazing women. The club was based around one particular series of girls books, but everyone - apart from collecting those books - had really interesting collections of other kid's books. One had been a specialist children's librarian, and dealt in second hand children's literature. In conversation at an early meeting, I mentioned this book, which at some point in one of many house moves, I'd lost. Nothing loth, she tracked me down a copy. Not just any copy either. She found me a facsimile hardcover of the first edition - which was a total revelation.

Point 1...my beloved original paperback had been massively abridged. When I read my new copy for the first time, there were parts of the story I'd never even known existed. I have nothing against abridged books, in that, if it means they're out there and people read them, that's a good thing. BUT...to read the whole, original book...such bliss. My father collected Readers Digest books for years and they were my intro into all sorts of books - every month a new book with three or four books within it arrived and I read them from cover to cover as soon as he'd finished them. There are, now, many full length versions of books in the bookcase that I first met via those volumes of condensed novels.

Point 2...this book was written by two teenagers. By hand. During their summer term at school. When they should have been doing their homework. And one of them did the illustrations as well. Somehow, they never got caught. And then, when they had finished it, they packaged it up and sent it to Arthur Ransome - author of Swallows and Amazons - to read, having already written to ask him whether his next book in the Swallows series was going to be water or land based because they didn't want to clash with him... Their chutzpah still amazes me. Ransome was so impressed with the book that he sent it to his own publishers recommending that they read it with a view to publishing - which is what happened. There are two sequels that I - and my friend who found me this copy - have never been able to source - Escape to Persia and Oxus in Summer that I would dearly love to get my hands on but have yet to find.

The girls wrote it turn and turn about - one writing a chapter then handing it over for the other to continue. One of the quite remarkable things is that there is no marked clash in styles and the character development is incredibly consistent. Pamela Whitlock did the simple ink drawings, which have none of the refinement of other illustrators - I have whole sets of books I've collected just for the illustrations... - but they have a simple charm that fits completely with the story. the children are real and unaffected and there is absolutely nothing to suggest that it was written by two teenagers... In this facsimile edition is a long foreword by Arthur Ransome, which is delightful in itself.

I haven't quite finished it - it's been on my bedside table and I've been managing a few pages each evening. Tonight I have read a couple of chapters and have been totally engrossed, because it's really that good. I'd love to know what happened to those two girls - as well as finding the other two books. It's also a bit of a reality check - there is truly nothing that can get in the way of someone who has a story to tell...if these two girls could put a whole novel together in one term, and have backing from someone of Ransome's stature...what is stopping any of us??? 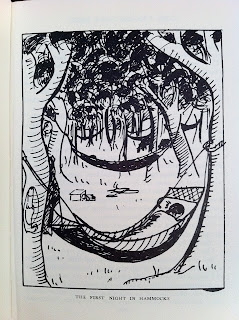