The Book of Aaron - Jim Shepard

I've read some tough Holocaust books - both fact and fiction - but I have to say, Jim Shepard's The Book of Aaron is right up there with the toughest. 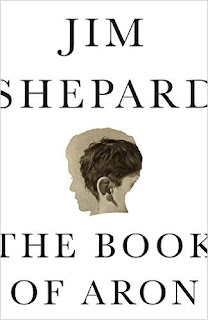 Set in the Warsaw Ghetto, the book begins as the walls to shut the Jews in from the rest of the city are being built. Nine year old Aaron's family lives within the area that is being enclosed, having previously moved from the country when his father was offered work in a Warsaw factory. The family is often at odds with each other, relationships are brittle and frequently acrimonious. Aaron is nicknamed Sh'maya (a play on the Hebrew 'sh'ma' - 'hear') by an uncle who says he 'did so many things that made him put his finger to his nose as a warning and say, 'God has heard.''. He doesn't like school and comes home with unsatisfactory on all his reports. His parents are constantly frustrated with him, but are mostly unable to convince him of the benefits of knuckling down. He seems to deliberately continue to provoke them by getting into more trouble - almost as if any attention is going to be good attention, even being in trouble.

As more and more people are moved into the Ghetto and daily live gets more and more difficult, Aaron teams up with a gang of other children smuggling food via tunnels in the walls. It is dangerous, and often they fluke escaping the authorities - German, Polish and Jewish. His gang is as dysfunctional as his family, constantly sniping at one another and inflicting punishments on each other. Aaron is often the butt of their fears and frustration of their collective circumstances, as he is frequently unsure of himself and cries enough to aggravate them.

Uncertainty is the norm for everyone in the Ghetto as, first, men and older boys are rounded up and taken off to 'work details', and then deportations to the death camps begin. Disease starts to take its toll. First Aaron's younger brother dies. Then his father and older brothers disappear in a 'work' roundup. Through a contact within the Ghetto's Jewish police, he manages, in exchange for intelligence of underground activities, to get occasional word of them. Eventually that dries up, but he is now caught up in having to make reports to his police contact. Then his mother dies of typhus and he is left alone.

When he and a fellow gang member, Lutek, are caught, Lutek is shot, but he is let off - no doubt to take word of potential consequences back to his gang, and others like them. The rest of the gang no longer trust him and he is left with no one to turn to. Having had a number of chance encounters with Janusz Korczak, director of an orphanage for Jewish children, he seeks refuge there, and begins a strange relationship with Kosczak - part colleague, part protege, part protector.

Janusz Korczak was a world renowned pediatrician, writer and educator. When the Ghetto walls were erected, he received countless offers to be rescued, hidden, looked after. He refused them all, because he wouldn't leave the children. One of the legendary figures of the Holocaust, he was transported, along with all the children and orphanage staff, to the death camp, Treblinka, where they were gassed on arrival.

The narrative of the novel creates a picture of those last weeks in the Ghetto within the orphanage before they were ordered to the trains to be deported. Most of what I've read of Korczak paints a noble portrait of a sensitive, self-sacrificing, intelligent man, who devotes his life to children and their welfare. Shepard offers up a portrayal that shows us a man down to his last resources, worn out begging for food and money for the children, ill with malnutrition and a heart condition, despondent and depressed. He smokes too much, drinks too much, doesn't sleep enough, and smells bad. He is often frustrated and angry, but never with the children. Aaron shadows him trying, along with orphanage staff, to discourage him from going out as it gets more and more dangerous. Aaron, in turn, is terrified of going out, fearing retribution from those gang members still alive, and of being picked up again by the authorities.

Ultimately, the order comes for the orphanage to be deported. In the chaos of the Umschlagplatz - the square where the Jews were gathered before being put on the trains - their arrival in neat, orderly lines, four abreast, with Korczak leading them, is one of the most poignant scenes reported. The novel ends as Koczak is lifting the smallest children into the cattle trucks, and we know there were no survivors.

I had to not read this book at night, in the end. It gave me nightmares. I've had Holocaust nightmares for years, particularly since studying in Jerusalem at Yad Vashem, doing an educator's course there for my then job at the Sydney Jewish Museum. I've heard many Survivor testimonies, I've read so many books, and watched countless documentaries. During the course - nineteen days straight, with only Saturdays off - we all lost it at some point. On the whole though, I developed ways of keeping it at a bit of a distance. A great deal of Holocaust fiction is 'sanitised', to a point. There's a sense sometimes, of a certain degree of nobility in the suffering - which of course, there really wasn't.
Shepard's book doesn't have any of that. It's gritty and raw. The dirt, disease, monotony and suffering are not hidden or minimised. Aaron's family argue. The relationship between his parents is fragile and deeply flawed. He appears to mostly be afraid of his father. He has a close bond with his mother, but that is cracked often with her despair over many of his actions.

There is nothing elegant about Shepard's text - it is terse, and pointed. The sentences are mostly short and abrupt. Descriptions are very basic. Dirt is dirt, the misery is miserable. I have a highly tuned visual sense, and reading this book created dark imagery in my head as I read. I found it very difficult to shake off, so after the first night of bad dreams, kept different books by the bed for night time reading. My sense is that this is an important book. At a time when many of the last Survivors are dying of old age, the history is becoming more distant. There is nothing quite like hearing first hand testimony from a Survivor. For me, the style of this book came close, even though it is a work of fiction.

I think that, perhaps, this is an important book. There is nothing of the 'story' about it really. It feels real. It's not an easy read, but it's one I think I'm glad I persevered with - for all the attendant difficulties.
Posted by Kaz at 21:42