The Golem and the Djinni - Helene Wecker

OK, some major kicking myself in the pants to get this post done. The book has been sitting looking (glaring) at me for WEEKS...seriously. Bad blogger! This is for the 'book with non- human characters' square on the Book Bingo chart. It's also a book I kept seeing around the place that I meant to get my hands on, but one way or another, hadn't... So, in an airport bookshop with a three hour flight ahead of me, I figured the time had come. 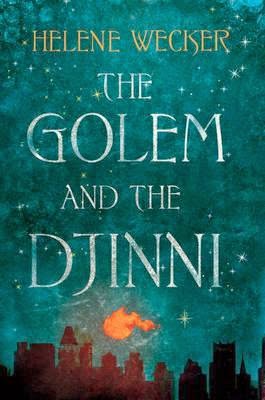 To preface my review, for those who don't know, the two creatures come from legend or myth. A golem is a figure made of clay that is brought to life by magic, and the legends come from the mystic, or Kabbalistic, end of Judaism. The most famous is the Golem of Prague - a legend about a golem created to protect the Jews of Prague in the 1500s. Typically, they have enormous strength, don't require food or sleep, and are bound to their master - usually the person who created them. A djinni (alternatively djin, or djinn - useful Scrabble word, by the way!) is found in Arabic and Muslim mythology, and is an intelligent spirit of lower rank than the angels. Djinni can appear in human or animal form and can possess humans.

The main narrative is set in New York in 1899, a time of enormous migration of Jews from the Pale of Settlement to the New World, to escape increasing anti-semitism and pogroms. On a ship bound for America is Otto Rotfeld. His life is in ruins, at 33, having frittered away the family business within five years of inheriting it. The solution, he thinks, is to leave and start over. He also wants a wife, but as a gangly and unattractive man, he's never had any success with women. So, after purchasing his ticket, he uses the last of his funds to commission Yehudah Schaalman - a man known to dabble in the Kabbalah - to create a female golem for him. After many misgivings, but lured by the challenge of making such a golem, Schaalman creates her. She's packed into a freight crate, together with instructions for bringing her to life - which Schaalman cautions Rotfeld not to do until he's safely landed. However, on the ship, Rotfeld becomes ill, and in his delirium makes his way into the hold, locates the crate, and activates the golem who, when he finally collapses, carries him back up to the deck to the ship's doctor. However, the doctor is unable to save Rotfeld, and the golem is left masterless, with no ticket, fussed over by the crew as the bereaved wife. She realises that with no ticket, and no other papers, she has no way of getting through immigration - so she vanishes over the side of the ship as they enter the harbour and walks - under water - to shore, emerging on the Lower East Side of Manhattan.

Fortunately, early on during the days she is fumbling to learn how to conduct herself, she is discovered by old Rabbi Meyer, who, while not initially believing what he sees, realises what she is. He takes her in, names her Chava (life), begins to teach her how to blend in, gets her a job at the local bakery, and becomes her mentor. However, just as she's beginning to feel reasonably confident, the rabbi dies. Now, without master or mentor, she has to find her own way.

Meanwhile, a few neighbourhoods away in the Syrian community, the local tinsmith, Boutros Arbeely is given an old, battered copper flask to mend and polish. He has barely begun the work when a great bolt throws him off his feet, across the room and onto the floor by a table. Gathering himself back up, he is amazed to find a naked man lying on the floor of his shop. Getting up, the man sees Arbeely and lunges at him, and pins him to the floor with a soldering iron - which grows hotter and hotter in his hand - demanding to know where the wizard is... Reeling, Arbeely starts to realise that the man is a djinni, although he never really believed in the myths he'd gown up hearing. The djinni realises Arbeely is just an ordinary man and releases him, demanding to know where he is. It turns out that the djinni has been trapped inside the flask for many centuries by a wizard who outwitted him back in Syria. With no way of freeing himself, due to the iron cuff on his wrist, which also keeps him trapped in human form, the djinni has no option but to accept Arbeely's offer of hospitality and, when the djinni offers to help him with his business, they become partners.

Eventually, the golem and the djinni meet - although it takes quite a bit of reading to get to that point - and a most unlikely friendship grows. Both creatures that need neither food or sleep, therefore with a lot of surplus time on their hands, both stuck in situations not of their choosing, both powerless to change their situations, they come to understand each other well, and despite very different natures, to care for one another and to feel protective of the other's vulnerabilities. It's not an easy relationship. They are very, very different. They frustrate and, at times, alarm each other. Eventually their pasts catch up with them in a most unexpected manner, and that bond is severely tested.

This is a wonderful read. It kept me going on the plane, and during down times while we were in New Zealand recently. I found myself resenting having to put it down. It moves at a good pace, the contemporary narrative interspersed with the story of the djinni's past, a device that makes sense of the collision of their separate journeys when the story reaches its ultimate crisis. As a debut novel, it's a tour de force. The historical detail in the portrayal of New York's immigrant communities in the late 19th century is meticulously researched. While I am not familiar with the tenor of a Syrian community, the flavour of the Jewish community is portrayed with great authenticity. The blend of human and mythical stories is balanced and believable.

You'll enjoy this book if you have a taste for fantasy that is well grounded in the human experience. You'll also like it if you enjoy myths and legends. I picked my copy up in one of the bookshops in the Sydney International Airport for under $20, so it's also not something you'll have to try hard to justify!
Posted by Kaz at 22:33