So, I had a birthday, as you do...and my cousin - bless her heart - gave me a book voucher. Time was I used to get lots of these but, along with the once predicted stack of book-sized parcels, they've been a little thin on the ground in recent years, so I was very tickled to get this one.

I stood in Dymocks - the last of the mega stores left, I think - with said voucher, wondering what to buy, completely forgetting the list of books-I-want stored on my iPhone - DUH! (found that this morning...and felt silly...)

So...what to do? I could, if clever, manage to buy two new novels, given the amount on the voucher. Browsing the shelves didn't throw anything particularly exciting at me though, and the couple of titles I thought of weren't to be found amongst the store's mainstream collection. The children's fiction shelves I found quite depressing. I'm so spoiled for quality children's and young adult fiction, given my sizeable collection, and I have to say, browsing the new titles, what's largely available is a pretty homogenous collection of similar kinds of books. I remember, as a kid, being so torn for choices when I got taken to bookshops - all those wonderful titles published by the Oxford University Press, Puffin, Faber and Faber, and other legendary houses... These days, there is a preponderance of fantasy (never a big favourite of mine) and very few of the types of stories I used to, and still, enjoy. I gave up on those and wandered over to the non-fiction shelves, looked at some luscious coffee table books, gardening books (I'm craving a garden), decorating books (craving my own house), and came close to a Vogue publication of Vivienne Westwood in Vogue... And then, after a cursory glance over the cookbooks found THE book - Rachel Khoo's The Little Paris Kitchen. On Thursday nights, I get control of the TV remote (no small thing in a male dominated household!) and my viewing of choice is the lineup of food shows on SBS. I must have missed a few weeks, because I certainly missed the trailers for the series of The Little Paris Kitchen. And then one week, tuning back in, there was Rachel Khoo in the tiniest kitchen I've ever seen, crammed to the ceiling (literally) with utensils and other cooking equipment, turning out delectable, slightly tweaked French classics.

Very quickly, she became 'our girl' to DB, I had regular company while I watched each week, and with almost every dish he would state emphatically, "Now that's MY kind of food! Can you make that?" I hunted everywhere for the book and couldn't find it - finding others in the process, so we have a fairly impressive new collection of cookbooks, and perhaps I should do a post on what we're mostly cooking from at present... I'd quite forgotten it, and almost didn't see the copies stacked right at the bottom of the shelf in a corner. Having leafed through it last night, I'm all excited about playing with the recipes.

Khoo, a young Londoner, took herself to Paris, with nary a word of French, chasing the foodie dream. She trained at the Cordon Bleu school, and where she truly excels, in my opinion - from both the show and the book - is with baked treats. She takes French classics, and plays with them to make both simpler and sometimes lighter versions, and also takes them a few steps beyond original versions to create variations that are sometimes surprising, but will clearly work. One thing I must try before I'm too much older is her onion creme brulee - because I love onions and creme brulee, and I can just see how that could work. She also has a savoury cake that she made one episode when assembling a range of picnic-suitable foods. We're quite accustomed to variously flavoured savoury breads now, but this is a proper cake with cured sausage, pistachios and prunes. She says they're very common in France, and appear for lunches with a side salad and picnics...

The two stand out aspects of the series for me were that, by and large, with a couple of exceptions for excursions to different venues, she makes everything in the weeny kitchen of her studio apartment, and that she debunks the mystery of some of the more iconic French dishes, making them easily accessible to the majority of home cooks. The kitchen itself is a fabulous demonstration of how much you DON'T need to turn out good, seasonal food... To spin around in Khoo's kitchen, you'd have to keep your arms pinned completely to your sides or you'd be injured, and the only way you could have company in there would be if you were both standing still and very close together! However, she has an impressive array of fresh herbs growing in a window mounted glass house, and she's clearly come to a few of her adaptation simply because of the cramped conditions. 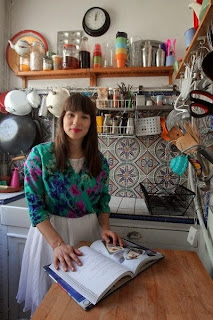 As far as the dishes go, she says exactly what I've been saying to people for years about souffles - as long as you can make a white sauce or a custard, you can make savoury or sweet souffles because they're just not that hard! She's also played with slow cooked, and sometimes awesomely indigestible,  dishes like cassoulet (a peasant dish comprising a mix of meats that usually includes sausage and poultry, dried beans, and vegetables) creating, using all the traditional ingredients, a soup that carries all the flavours of the original, without the lengthy cooking time or digestive issues! She doesn't dumb the recipes down though, and she makes no concessions to current trends for low fat - she uses butter, cream, creme fraiche and cheese with gay abandon - and reinforces the message that eating sensible quantities of these things do us no harm. Binging does, and snacking constantly between meals - not a French habit - does.

We just watched Julie and Julia again when it aired on commercial TV recently, so I feel as if finding this book now was timely - given that DB is now demanding French food instead of our usual Middle Eastern/Sephardi Jewish mix! These recipes are fun, and I intend to have fun with this book. For anyone out there that has a penchant for French food, but is looking for something a little less daunting than some of the classic tomes, this is a great book, and Khoo's story is inspirational. An added bonus are the delightful watercolour illustrations by Khoo that alternate with lovely atmospheric photos of Paris in all its moods...definitely time to put a foodie trip to Paris on the bucket list!
Posted by Kaz at 18:41