I'm working backwards on the backlog - eventually, I'll have to start re-reading because they won't be fresh enough in my mind, but this book has seared itself into my head and emotions. Partly, it's that Jewish settlements in the occupied zones of Israel are still making headline news. Only today, in a Jewish online news site I subscribe to, there was a story about an Israeli government block to more settlements in one particular area. And then of course, there are the headlines slamming the settlers. This book was published in 2004, and this is an ongoing issue. Also, the way Ragen tackles the complex nature of contemporary Israeli society head on, owning that there are positive relationships between Jews and Arabs, that there is infrastructure that is available to all comers, regardless of origin, and that there is suffering on each side, created such a strong impression on me in the face of so much anti-Israeli press that I read on a daily basis. 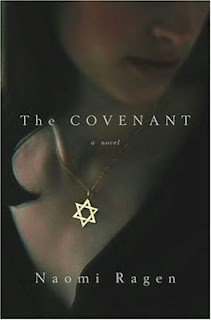 The Covenant tells the story of a young couple, both olim (immigrants) from America, making their lives in East Jerusalem. Jon is a doctor at Hadassah Hospital, caring for cancer patients. Elise is confined to bed rest in her third trimester of a difficult pregnancy. They have a four year old daughter, Ilana. In their small village of Jewish settlers - most of whom moved there because they could build houses and have space that would have extended them beyond their means elsewhere in Jerusalem - they live a peaceful, quiet life. They don't consider themselves 'settlers' in the way the media describes so many of them - i.e. religious fanatics. They get on well with their Arab neighbours. Jon treats people they know in the hospital. They exchange garden produce and care for each other's children.

But this is the time of the Intifada. It's not being in their village that's the riskiest part of their lives - it's the commute between the village and West Jerusalem. One day, Elise's worst fears are realised when the last call she receives from Jon, on his way home with Ilana from the child's ballet concert, means he's only ten minutes from home...but they don't arrive. When the local security official and the village rabbi arrive at her house, all they can tell her is that they have found the car, riddled with bullets and bloodstained, but there are no bodies. Elise is rushed to hospital, her precarious pregnancy now even more at risk.

Meanwhile, we are introduced to Elise's grandmother, Leah, an Auschwitz Survivor, in New York. While Elise knows something of Leah's story, she is totally unprepared for what she unleashes when she calls Leah with the news from the hospital. Leah, after the initial shock, calls on The Covenant - her group of Survivor friends; three others with whom she survived the camps - Esther, Ariana and Polish Maria, the latter sent to the camps having been discovered hiding Jewish children. To survive, they made a solemn vow, a covenant, that they will forever protect each other, regardless of the cost, extending it to their families of the future, again, regardless of the cost. Esther is now the queen of a highly successful cosmetics empire and Ariana runs a successful nightclub in Paris, the haunt of a select rich, famous and influential clientele. Maria sends, in advance of her own arrival in Jerusalem, her film-maker grandson, Milos, with a brief to infiltrate the media circles and try to get close to the clandestine information exchange that is rife in the Middle East.

Milos gets lucky, chancing on a British-based international press group whose latest recruit, Julia Greenberg - Jewish but disengaged from her heritage and determinedly non-partisan - brazens her way past the cautious protocols employed by her more seasoned colleagues to get her hands on the first video released by the perpetrators, which contains the first footage of Jon and Ilana, still alive but captive in a secret location and clearly to be used as hostages against the release of Palestinian activists held in Israeli prisons.

The existence of the video is kept secret from Elise, the doctors fearing that she isn't strong enough to deal with it. Leah unwittingly lets the secret out, and as feared, the shock sends Elise into premature labour. We are left guessing what happens as the narrative shifts to the other members of the covenant, who swing into action, calling on all their contacts - including Esther's grandaughter , who not only 'married out', but converted to Islam to marry a Saudi Prince. The prince, Whally, turns out, by the time all the threads are drawn together through The Covenant's networks, to be key to accessing the Hamas leader who can deliver the order that will enable an operation to potentially free Jon and Ilana.

There is no neat and tidy end to this complex and difficult story. Apart from anything else, it would have been a gross injustice to all the victims of the Intifadas to contrive a 'happily ever after' ending. A second video released by the kidnappers shows Jon with clear evidence that he's been severely beaten and Ilana equally clearly dressed up for the purpose of the video, and mystifyingly, suddenly giving a radiant smile at the end... Elise is convinced the child has seen someone she knows out of camera range - a claim that is dismissed by everyone.

As the members of The Covenant touch down at Ben Gurion Airport, news comes to Milos, who has taken Leah there to meet the others, that there has been yet another suicide bomb blast in Jerusalem, and one of the victims in Julia Greenberg - the English journalist with whom he has become involved, and who has betrayed he and Elise by compiling a compromising story that includes an emotional plea from Elise to the kidnappers.

The rescue operation is launched and, acting on the information that has been carefully sourced and confirmed, and with the assistance of a double agent who is disenchanted with his Hamas compatriots, they arrive at the safe house - where the beginning of everything going wrong starts to happen. Like falling dominos, the ripple effect continues, and in the end, at another house - that of one of the kidnappers - to which Jon has been moved, shots are fired, and many lives are lost. At the end of it all, there is still a mystery - where is Ilana?

I do recommend this book, while offering a caution that it is a difficult and emotional read. Nothwithstanding that, I couldn't put it down... I have more Ragen books to catch up with on the blog, so there are more reviews to come, but one thing I can say at this point is that she is remarkably consistent for the tone of authenticity in her writing. As I know people who were caught up in both Intifadas - some of whom lost loved ones - I have their stories with which to compare, and they are eerily similar. Possibly one of the most challenging aspects for readers only familiar with Israel and the Israeli/Palestinian conflict via mainstream Western media will be Ragen's focus on the normal, every day, functional, often close, relationships between Jews and Arabs who live and work in close proximity with each other.

One thing that has haunted me long after finishing the book was Ragen's paragraph that is part of Jon's internal musings towards the end of the novel, when he is considering his life, potentially his death, and how it is that things have developed the way they have in the land that he truly loves. It is one of the most obvious, yet often unsaid and/or unwritten statements about the genesis of a terrorist that I've come across and I'll end this review with it:


A child did not become a hate-filled fanatic, a terrorist, without entire, elaborate structures of educational institutions, training camps, expensive weapons and the backing of legitimate national support. It was a gargantuan beast, and it had spread its tentacles throughout the world. Like the ancient Caananite cult of Molech, which sacrificed children to a Satanic god in beastly rituals, this new beast demanded the lives of its children, forcing them to kill and convincing them it was a good thing to die.