Everywhere I look - in the papers, online, etc - there are shortlists for literary prizes...it's that time of year. One that has caught my eye is the inaugural Stella Prize, named after Stella Miles Franklin. It is not, as the original Miles Franklin Award is, an open award; it is intended for women writers only. The latest article from this weekend's Sydney Morning Herald, contains some interesting statistics about the representation of women writers in literary awards, including the Miles Franklin, and some discussion about the possible reasons why women continue to be under-represented in award shortlists, let alone on the winner's podium.

Reading the article reminded me of a conversation I was part of many years ago in my mother's living room. Present were my mother and a number of her friends, including an old family friend who was very well read, and male. The discussion centred around the ABC radio programme Life Matters, compered by Geraldine Doogue, which covers (I think it's still running) a myriad of topics. There had been a programme that week about literature and Doogue had interviewed someone - can't remember who it was now - and they discussed the difference between the work of male and female writers. Again, memory is failing me, but either Doogue or the interviewee made the comment that, by and large, they only read women writers. Old Family Friend was quite agitated by the very idea... A vigorous discussion ensued as to the various merits of men and women's fiction, of - to his way of thinking - the limited experience to be had by reading the work of only one gender, and that someone should be on the radio admitting to being so limited! It all got a bit heated at one point - and I must confess to not helping with that... At the time, I was up to my eyes in a visual arts degree course, and was hitting the wall in history subjects that appeared contain few, if any, women artists - at a time where the backlash of feminist history publishing was at its height - so I weighed in from a feminist viewpoint, which clashed badly with a number of strongly held generation viewpoints!

So, here are two quick snaps of two of my bookcases: 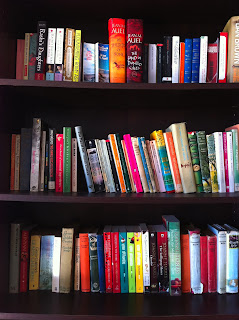 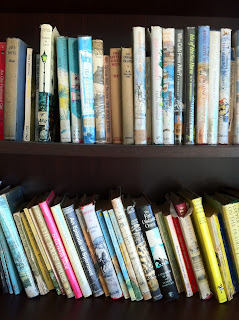 The top one is part of my adult fiction collection and the bottom is part of the children's literature. Taken randomly - shelf choice was governed purely by how clear the shelves were, as there are a number of extraneous objects that shouldn't be on the shelves elsewhere that I haven't yet cleared away!

If you click on the images you can make them bigger, and hopefully read the spines. Both collections are skewed more to women writers. This isn't intentional, and I'd not thought about my own collection of books in gendered terms until all the things that came together in my head this morning prompted me to write this post.

With the children's literature, it may just be that more women write for children - I don't know. Anecdotal evidence suggests that girls tend to read more than boys, so perhaps that market has always been larger and more open to women writers. Conversely, perhaps that very fact has also tended to pigeon-hole women writers in the eyes of a largely (for a long time) male-dominated publishing industry. Rogue books/series such as J.K. Rowling's Harry Potter books create isolated phenomena that bring reading to the fore in a way it isn't generally as a popular recreational pastime, crossing both gender and age. The recent rise in vampire and fantasy literature that has made its way down into YA shelves has possibly also caught the imagination of a more balanced gender spread of readers. I don't know - I'm supposing here... Admittedly, what can be seen on my children's lit shelves is also skewed heavily in the vintage and classic eras, when there were definitely more women writing for children, and across much wider subject matter too - although, rather lacking in vampires! The 'boys' literature of the vintage and classic writers tended to be more heavily adventure based.

The top photo is a more balanced selection of both contemporary and vintage fiction - but again, I realise, there are far more women writers up there than men. I don't know what that says about me... There is a quote from the article I've referenced, by the only male judge for the Stella Prize, Rafael Epstein, who says, in summing up whether there is a huge difference in the way that men and women write (if you click on the link at the end of the quote, you can read the whole article):


Epstein, an avid reader of male authors, is wary of making generalisations, but after ploughing through scores of books by female writers, he has come to the conclusion that women do indeed write differently. ''They have more of an organic writing style, an ability to weave every aspect of life seamlessly into the character considerations rather than having a more singular focus.''
This is most noticeable when it comes to writing about sex. ''It is far more real, far more integral to the character and necessary to the plot.''

I wonder if it is that organic, seamless and 'real' quality of women's writing that appeals to me subconsciously. It feels natural...after all, I AM female! It's not that I don't read men's writing - I do - on the stack to the right of my computer that are waiting to be written about, it's a fifty-fifty split of men and women's books. Although, the three titles I have listed in my diary as 'must go buy SOON' are all women's titles. The writer who, more than any other, inspires my writing is Drusilla Modjeska, another woman... I don't know. Ultimately, what I read is about personal taste, and if that means I'm reading more women writers, I don't see it as a hugely political statement.

I have no critical opinion one way or the other because to make one purely on the basis of gender flies in the face of what I believe to be true and fair - there are great writers of both genders, as there are some crappy writers of both genders. Ditto for practitioners in all the arts, and indeed, all areas of human endeavour. Is representation equal for both genders though...? History demonstrates that it hasn't been, and despite all the revolutions and legislation, the reality is that we still haven't reached a point where both genders are represented equally across the board in any field.

So over to you, my fellow readers...what's on YOUR bookshelves, and who are you reading?
Posted by Kaz at 17:06