Another books vs TV rant...

An old friend of mine, not usually given to posting book-related things on FB - let's call him The Actor - popped this up on Facebook yesterday, and I just couldn't resist: 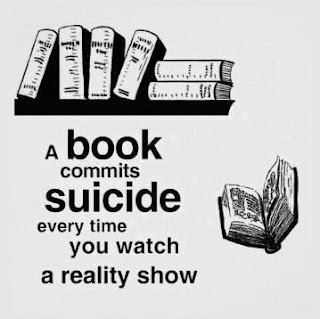 No analysis needed there... Last night we watched an ad for what my bones tell me could well be one of the more dreadful viewing options about to hit our TV screens, Channel Nine's The Great Australian Bake Off. Garish sets, a dragon-lady judge, and feverish contestants bidding to become Australia's best baker. Our TV is aged and temperamental, the T-Box is new but just as temperamental, and we live in a reception black spot, so our channel options are limited to the ABC , SBS and Channel Nine, so we've been spared the last doses of My Kitchen Rules and Masterchef, along with a number of other gruesome reality shows and competitions - which apparently are starting to be one and the same category... And so, why another cooking comp? Well, Channel Nine didn't have one, did it? And this late in the piece, when TV is saturated by this genre and people are getting tired of it, someone in the hierarchy, in their infinite wisdom, thinks it's a great idea to add a new one...!

There's been much debate about the runaway success of Downton Abbey, and I've noticed trailers for a new period drama/soap that's to begin soon so it will be interesting to see if the same thing happens with that one. People have asked why Downton Abbey was and continues to be such a hit - a period drama set in England... Now, as a child, one of my enduring memories is of Sunday night TV on the ABC where there was usually a serial, often from the BBC, and nearly always a period piece. Who remembers The Pallisers, The Oneiden Line (Mum's favourite), Rush, Seven Little Australians, A Horseman Riding By, and others that can't recall as I type? Many were quality adaptations of books with incredible casts - Leonard Teale's Captain Woolcott in Seven Little Australians was one scary, stern father, and when I met him many years later, I found myself driven to be more than normally polite! What they all had in common was that they were great stories. Where are all the great stories gone on TV? Those Sunday evenings were an event. Dinner was done and cleared away so we could all sit down to watch, and we hung off every word, sad when each episode finished because it was over, but reassured that next week the show would be back. There was the inherent drama of the show, and all that lovely anticipation of the next episode.

That's gone. These awful competitions have taken over TV time. They're on every night - each one of them... there's almost no room left on the programme to insert a good story. And it's not until there's a runaway surprise success like Downton Abbey (which by the way, I've not seen much of, only bits of the first series and none of the rest...) that everyone sits up and realises that there are other possibilities than sitting like zombies in front of the box night after night watching people behaving badly in the chase for money, a book deal, a record contract, and a somewhat dubious title that is, essentially, totally ephemeral.

And then, folks, there are those enduring alternatives...books... Remember when digital publishing took off and the commentary was that it would spell the end of actual books? It hasn't though, has it? Online commerce has certainly changed how we can access books, including the choice of eBooks or actual objects that have to be sent by snail mail - and who doesn't love getting a parcel in the post, people? But, books are still being published and people are still reading them. People's hunger for stories - stories to transport us, teach us, comfort us, thrill us, have us on the edge of our seats in anticipation of what's on the next page...all that and so much more... National Literacy and Numeracy Week and The National Year of Reading about which I posted aeons ago are events that involve innumerable people in structured reading programmes, especially children. I remember Book Week as a child, with readathons, writing and creating our own books (The Big Red Tomato, a co-authored and illustrated epic by my best friend and I comes back to mind...I think it's buried in a box in storage somewhere...) and all sorts of book-related activities abounded at school and the local library.

DB tells me that current programming on TV is as it is because it's what people want. Scary thought... I don't want it, and I make a choice to do other things if there are things blaring that I'm not interested in watching. But the hypnotic power of 'the box' to have people sitting mindlessly in front of it, flicking idlely through the channels without any though - particularly about the time that's passing them by - I find quite disturbing, given just how much dross there is available.

Keep the books alive folks. Get out there and read. Read to your children. Read to each other - what ever happened to reading aloud??? Just read!
Posted by Kaz at 12:34