Some of the other literary blogs I follow put me to shame in terms of the writers' disciplined approach and solidly written reviews. But then, I didn't set out to create a blog of book reviews - there are, as I'm discovering, people out there already doing it very well indeed. Having said that, my last few posts have been a tad scatty, so many thanks to those of you who are sticking with me! I decided, in advance of a looming house move - don't ask...it wasn't part of the plan - that, prior to crating all my books yet again, I'd have a good look over them and share some of my special treasures.

Lovers of Australian children's literature will be familiar with Ethel Turner's books. Her most well known work - I think, correct me if I'm wrong - is Seven Little Australians. It was read to me as a small child, and there was a truly wonderful television series made, with Leonard Teale as the Colonel. It's never been aired again, and I'd dearly love to ransack the ABC cellars to find it and get it on again!

It's a wondrous book that tells the story of a a large family in a state of genteel poverty. The 'seven' are the children of a most upright army colonel who, when widowed, marries a much younger second wife - only a few years older than his eldest daughter - who bears him the youngest of the brood. They're a madcap crew of boys and girls, all suffering for want of kindly discipline that their young stepmother is incapable of delivering and their father is equally incapable of - his is of a much more rigid brand.

Meg has social aspirations which she can't quite attain, although not for want of trying, and suffers from being the oldest girl with responsibilities she just doesn't want to shoulder. Pip, the oldest boy is at university, but struggles to keep up with his comrades through lack of funds and feels the penny pinching more often than not. Nell wants to be grown up but is far off convincing anyone that she's worthy of being considered so. Bunty, the younger boy is overweight, accident-prone, lazy, greedy and is constantly in trouble... Baby, actually Winifred but no one has yet remembered to call her that since the advent of the newest member of the family was born, is Bunty's only friend and defender. 'The General' is the baby, much loved by them all. In the middle is Judy, the strongest, most self-willed of the lot, whose energy and lack of direction lands her continually in scrape after scrape - sometimes on her own, but often involving the others.

Anyone who knows this book knows Judy's story and will understand when I say that the pages of my book are greatly tear spotted at a certain point from many readings. What you might not know is that, in response to many, many letters begging for more of Judy, Turner wrote a book called Judy and Punch, which tells the story of the period when Judy runs away from boarding school. In the original story, there is just a gap at home while she's at school before Pip finds her hiding in the woodshed. I already had the other two book in the main trilogy but it was years before I could track a copy of this one down - and the triumph when I found it was immense, especially as a landed myself a first edition! 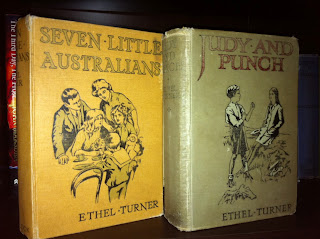 The lovely thing about so many of Turner's books for a Sydneysider is the local settings. Flower o'the Pine is set in Manly - pre-Harbour Bridge, so the only sensible commute for the two student members of that household is the ferry to Circular Quay. It's possible to go to Manly and traipse around and see things from identical viewpoints as are described in the book.

There is also oodles of the social history of Sydney at the time. Turner came to Australia from England as a child - Three Little Maids is autobiographically based - and she knew all too well the struggle to maintain appearances on little money, and the desirability of meeting the right people and marrying well. When you read her journals, the day to day facts of her life that lie behind the stories are little different from the tales she wove. I was taken to task by one of my art history lecturers at art school for using a quote from Mother's Little Girl in a paper about the development of the domestic floor plan in Australia. She said, in her comments, that it was an inappropriate text to reference for an academic paper. I argued my choice on the basis of using the text as part of the available social history commentary of the era - as this book describes, in one beautifully evocative paragraph, the origins of the Australian Dream; to have one's own house on a quarter acre block. I'm not sure if I actually lost marks for using the novel as a reference, in later discussions, she held her ground, although the other history lecturer didn't see the problem!

A word of warning for would be Turner collectors, particularly the older editions. Ward Lock, Turner's publisher, made beautiful solidly constructed hardcover novels, with thick, heavy, blotting-paper like pages... They are large, and very heavy. Two points: you need a lot of bookshelf room. I only have about half of what she wrote, and they take up a full three foot shelf's worth of space . Secondly, if you find a second hand bookshop with a stack of them, take your finds one by one to the sales counter. Do not, as I did on one memorable occasion, stack them on one arm and keep traveling along the shelves with your head on one side. You will put your neck out. I did. It made, after weeks of physiotherapy to put it right, for a very expensive pile of books...

But...for all that, this is something of what you will be looking at: 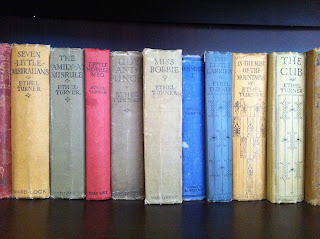