The Prime of Miss Jean Brodie

Amazing, the things you find when you move. Readers may remember back when I was discussing Catcher in the Rye  that there was a conversation I had with an old school buddy who follows my blog - and he challenged me - and himself - to go back and re-read Muriel Spark's classic, The Prime of Miss Jean Brodie, which we did at school around the same time as Catcher. I thought it was one of the books I'd consigned to storage prior to my previous move. Not so... When I was re-stacking the bookcases on the weekend - thank you, Dearly Beloved, for packing them and moving them all while I was a t work - I came across my copy and put it to one side to read. 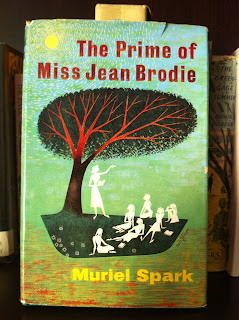 It is, as I discovered, a very interesting exercise to read a book as an adult, years after having to read it as a teenager...or, for that matter, to re-read something that you've only read before at any age because you had to for study purposes (I'm thinking of my gentle wanderings though A Room of One's Own - which I am enjoying immensely, and far differently to my uni reading of it, knowing I had to respond critically within an academic context).

There are a few things that strike me about Miss Jean Brodie on this reading. It has a witty brilliance that is very much a product of the 'swinging sixties' when it was first published. Spark's text is spare and economical, and there is a clipped style in the phrasing that keeps you turning pages to see where the next quite outrageous statement is going to land. However, the sizzling undercurrents of subversive politics and sex, when taken out of the party circuit of 60s movies and situated in a girls' school, become something quite dark in a weird kind of way - at least, that's how it reads for me now, given that I'm reading through a filter of remembering that we studied this book as 14/15 year olds.

There is also the most delicious frisson created by the conversations between Miss Brodie and her set of girls - topics that would normally be off-limits, and taboos broken by crossing boundaries that wouldn't normally be crossed, as in this denunciation of the school's headmistress by Miss Brodie:


"So I intend simply to point out to Miss Mackay that there is a radical difference in our principals of education. Radical is a word pertaining roots - Latin radix, a root.We differ at root, the headmistress and I, upon the question of whether we are employed to educate the minds of girls or to intrude upon them. We have had this argument before, but Miss Mackay is not, I may say, an outstanding logician. A logician is one skilled in logic. Logic is the art of reasoning ..."

I cannot, for a moment, imagine any teacher of mine discussing the merits, or lack of, of one of their colleagues with us... There was a distinct space between us and them. The very rare times that that bent I can remember with particular clarity, and with only a single exception in my whole high school career, that distance was consistently maintained. But, the power these confidences gave Miss Brodie over her girls at their most impressionable age, was considerable. They became set apart from the rest of the school, and while this wasn't always comfortable for them individually, collectively it gave them a sense of power and notoriety that was, if you consider the need for adolescents to rebel, highly desirable. Even as they started to branch out and find themselves as individuals, the Brodie legacy was evident:


But Miss Brodie as leader of the set, Miss Brodie as a Roman matron, Miss Brodie as an educational reformer were still prominent. It was not always comfortable, from the school point of view, to be associated with her. The lack of team spirit alone, the fact that the Brodie set preferred golf to hockey or netball if they preferred anything at all, were enough to set them apart, even if they had not dented in the crowns of their hats and tilted them backwards or forwards. It was impossible for them to escape from the Brodie set because they were the Brodie set in the eyes of the school. Nominally, they were members of Holyrood, Melrose, Argyll and Biggar, but it had been well known that the Brodie set had no team spirit and did not care which house won the team shield. They were not allowed to care. Their disregard had now become an institution, to be respected like the house system itself. For their own part, and without this reputation, the six girls would have gone each her own way by the time she was in the fourth form and had reached the age of sixteen.

But it was irrevocable, and they mode the most of it, and saw that their position was really quite enviable. Everyone thought the Brodie set had more fun than anyone else, what with visits to Cramond, to Teddy Lloyd's studio, to the theatre and teas with Miss Brodie. And indeed it was so. And Miss Brodie was always a figure of glamorous activity even in the eyes of the non-Brodie girls.

And yet, ultimately, there is a sense of damage that starts to make itself felt, as sense that, for the girls, individually, many things aren't as Miss Brodie says they must be - or, more to the point, that there are other ways to approach things, understand them and experienced than the way she insists. As the girls find and develop individual skills and personal characteristics, they start to resist her, even if they're not consciously aware that that is what they're doing. One of them - Sandy - who went on to study psychology and then became a nun - is perhaps the most sharply observant and questioning of Miss Brodie, although she never actually confronts her. In her observations of Miss Brodie's obsession with the art master - with whom she is in love but never pursues on her own account - she realises that there are many layers in what is going on:

It is Sandy, in the end, who betrays Miss Brodie who is retired from her position at the school knowing - because the headmistress can't resist the dig - that it was one of her own set who did the deed. The set stay in touch, the others visiting Sandy in her convent, and always, Miss Brodie comes up in conversation, remembered overall with fondness. The others never know that Sandy was the cause of Miss Brodie's dismissal.

I think, as a girl's 'rite of passage' story, there are themes and issues that crop up that have a certain universality about them, but I don't know how today's girls would manage this particular book. I think that there is too much of it that is peculiar to the time of its writing, and also its setting - pre-WWII Edinburgh. Perhaps the marvelous film that was made, with the redoubtable Maggie Smith as Miss Jean Brodie (and I can't honestly imagine anyone else who could have played her so utterly perfectly) might be more accessible.

If anyone has thoughts/memories of this particular book, please comment. Likewise any other books that were studied at school or uni and you have re-visited...