Reading is a contagious disease

A fellow book blogger and follow of this blog recently bought a stack of John Wyndham paperbacks, released by Penguin with shiny new designs. He's written about them here, and has a review of his first reading, Chocky,  here. I warned him that reading his crits of his Wyndhams was likely to set me off on another re-reading of them...

John Wyndham is an old friend of mine in my bookcases. As I commented on Peter's blog, my somewhat battered collection date from many years ago and have none of the schmick glamour of his nice new ones. His response was that mine are probably collector's items now. I'm not so sure of that really - they're a bit bashed around through much use. Most of them are Penguin Classics, one of which was converted by the library from which I bought it into a hardcover by pulling the covers off, pasting them onto hardboard and then sticking it all back together again with book tape! My copy of Trouble with Lichen is the odd book out, being a lone hardcover - with very contemporary ink illustrations dotted through the pages. 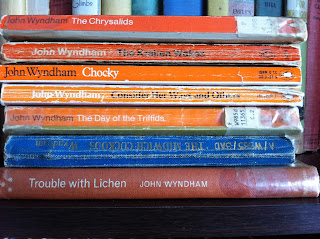 My all time favourite is The Chrysalids. We studied it at school, early in high school - and this is my copy from then! I think we did The Day of the Triffids as well, I can't quite remember. My school buddy who follows this blog might recall.... The Chrysalids was the first time I'd read anything in the SF genre that wasn't some big inter-galactic battle or that had a primary focus on technology. I had read the John Christopher trilogies - The Tripods and The Prince in Waiting - which are set, like The Chrysalids, post apocalypse, when the world and society is reduced back to much more primitive styles of living after the havoc wrought by the abuse of technology. The Chrysalids is, like most of Wyndham's writing, focused on the human condition; the human and emotional experience of whatever situations he writes for his characters. 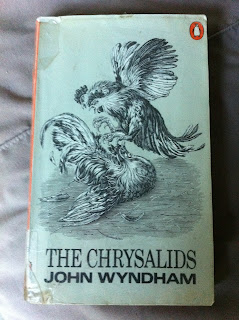 In The Chrysalids, we find a community that is deeply rooted in old Biblical precepts of what constitutes God-like perfection of species - man, beast and plants. Without it being spelled out how they come about, the reader learns that in these small communities there are deformities that must be rooted out and destroyed, and they are there because of the sins of those who came before and caused the wastelands at the perimeters of their useable land. David Strorm is the son of one of the leaders in his community. Strorm senior is one of the most rigid enforcers of the laws that state any deformed plant or beast on his property must be destroyed. David is something of a loner, separated from his nearest siblings on either side by large gaps in years that are unexplained, although has has hazy memories of babies being born, babies that didn't live. There is also the puzzling awareness of the unexplained fact that his father, owner of the family property and head of the familiy, is the second son... And then one day he meets Sophie, a little girl with six toes on each foot. He discovers it when she is hurt and he has to take her shoe off to free it from where it is caught. Her parents swear him to silence, but to himself, he starts to question - how could two tiny toes make small girl evil?

There is also the close communication he has with his cousin Rosalind, which he learns early to not mention - initially just though an innate sense of caution, later as he realises that it is something that makes them different. And there are others...friends in the area with whom he and Rosalind can also communicate, mind to mind. They don't understand what it is, but as they grow older and more aware of the potential dangers, they grow closer and more cautious.

The David's little sister, Petra is born. Passed by the local authorities, she is another 'perfect' child born to the Strorms. A few days later, David's aunt arrives with her baby, also just born. Unlike Petra, this child has a minor defect and she begs David's mother to substitute Petra for the inspection to gain a certificate of purity for her baby. She is refused, and this is her third 'imperfect' child. David's father hounds her from the house, calling her a blasphemer. The news comes later that her body has been found in the river. Losing a third child breaks her.

By now, David is very aware that his ability to communicate with the others via their thoughts - a form of telepathy - would be seen equally as a deformity and is very frightened. However, they have all grown up being cautious and protective of their secret, and so they stay until the day when the eight of them discover that they have become nine. David, in the middle of the fields helping with the harvest, is struck by a severe pain in his head and in imperative so strong that he just bolts from the fields in response to the unspoken call - it is six year old Petra who, playing, has fallen into a pond and is drowning. In her panic, she unknowingly transmits. her panic He signal was so powerful it also brings Rosalind and they realise the dangers of any number of them converging on a spot due to a summons that nobody else will have heard.

The next crisis comes when another of the girls, Anne, decides to marry - outside their group. They all understand the dangers, but she is not to be persuaded otherwise. When, in order to protect them, David's uncle - the only one not of their group who knows of their gift - has the young man killed, Anne denounces them. They flee, heading for The Fringes - outlying areas where it is known mutations occur with frequency. The Fringes are populated by those humans judged mutant in infancy; sterilised and cast out to survive or not, they live, struggling for survival in an anarchic world of basic survival. There, Sophie, David's childhood friend who was eventually caught, surfaces and elects to help them. There too is David's uncle, his father's older brother, a man with grossly overlong limbs on a stunted torso, who is an embittered man of considerable power who rules over the little community.

Petra's extraordinary signals have been picked up by others on the other side of the world, who come from a community where everyone can communicate telepathically and it becomes a race against time as the Sealanders travel to rescue them, those hunting them close in and a clash between the 'righteous' and the inhabitants of The Fringes begins.

This is a book about fear of the unknown, bigotry and great sacrifice. It is also a book about love and understanding of difference. It contains one of my all time favourite passages of text about the nature of love - a summing up by David, in silence, when Sophie, in The Fringes, asks him if he loves Rosalind,

A word again... When the minds have learnt to mingle, when no thought is wholly one's own, and each has taken too much of the other ever to be entirely himself alone; when one has reached the beginning of seeing with a single eye, loving with a single heart. enjoying with a single joy; when there can be moments of identity and nothing is separate save bodies that long for one another... When there is that, where is the word? There is only the inadequacy of the word that exists.

'We love one another,' I said.

More than anything else, my reading of this book, each and every time - and I would probably re-read this one at least once a year, sometimes more often - brings home to me how much we lose by condemning what is different, what we don't understand - out of fear. The people in the story fear difference, they fear what doesn't conform, and they create a system of evaluation of perfection and fit it into a religious framework so that when something doesn't fit the norm, not only is it unacceptable, it is an offense in the sight of God. There is an alternative - we can seek to understand the unfamiliar, the unknown...and look for ways to learn about it that are mutually enriching...

For those of you who have yet to discover Wyndham's writing, look for the books. As Peter discovered, Penguin have recently re-published them in paperback. He got his copies in a Kinokuniya store. We have one of those in Sydney and I'll he heading over there to see if I can track down a copy of the volume of short stories that I don't have... Otherwise, go check out your local bookshop and give yourself a treat of some exceptionally timeless writing!
Posted by Kaz at 00:15