The 'stuff' of book addiction

Another totally priceless image from my librarian friend - whoever dreamed this one up has got it SO right! Years ago I played in a community concert band, and there was an informal social group who called themselves the 'Beer and Chip Group' - for the most common beverages and nibbles to be consumed post rehearsals. I also live with someone who, because he's pretty good about not having junk food in the house, doesn't often have to battle with rationing chips - but...the whole concept of stopping before you get to the end of the packet is pretty foreign anyway. 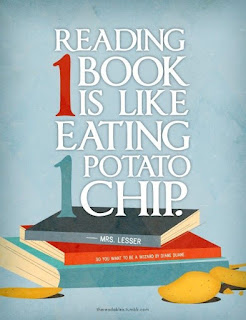 It's a bit like starting a series of books. Or going on a reading jag of a single author. I remember when I first discovered Jodi Picoult. Our local bookshop had nearly all of her books in stock and I kept finishing one, then trundling around the corner and buying another one. Just as well they weren't expensive... A good writer can be addictive. If you think back to my posts on Chocolate and its two sequels, you may remember me mentioning my friend who has most of Joanne Harris' books - on the basis of having read Chocolat and finding it such a wonderful piece of work, she's gone out and bought as many Harrises as she can find, without checking the blurbs. Consequently, we had a hilarious conversation about Lollipop Shoes being part of the Chocolat series, which she wasn't aware of, although she had it already - while I was going spare trying to locate the second book, which I thought was called something different - see here. I wasn't actually wrong, it turned out, but read the following post as well for the rest of the story.  I've done similar things with other authors myself, and at this point, I keep finding myself eyeing the H's in my bookshelves, and thinking that I only have four of Harris' books, so I must go get the rest. This friend also has a thing for Emily Bronte and has the largest collection of different editions of Wuthering Heights than anyone I know!

It was the same with Antonia Forest's Marlow series - see my previous post for a review of one of those... My first encounter with them was courtesy of a friend's bookcase years ago when Twenty Seven was a toddler. We were living in Canberra, had very little money so I wasn't buying books, and this friend had a great library of all sorts of things, including this series. I read them all and loved them. Imagine my joy when, at a library sale, I found four of them for 50c each - hardcovers with dust jackets. The friend was flabbergasted - she had the entire series in reissued paperbacks, bar the last of them which she'd bought new in hardcover, and neither of us had picked up on the two historical books at that stage. It was at that point, also, that I discovered what treasures I'd picked up. While the modern series covers just two an a half years in real time in the lives of the characters, they were written and published between 1948 and 1982. By the time I stumbled across these ex-library first editions (!) they were mostly out of print. They were originally published by Faber. Some of them were subsequently re-issued by Faber's paperback arm, Faber Fanfares, during the 1970s. These are lovely editions, actually - very solidly made with great cover designs. In the 1980s, Puffin bought the rights from Faber to re-issue just the books set in the school. Not being a Chalet School fan, I may be wrong on this one - but wasn't that the peak of those? And didn't Puffin publish those? If so, Forest's very modern-toned school stories were judged by Penguin - the parent publishing house - to be potentially very profitable. Perhaps on the back of that Forest re-emerged, and wrote Run Away Home, the last of the moderns, which was, again, published by Faber. Somewhere late 90s, Faber up and published a new edition of the first book, Autumn Term, but never went on with the rest of the series. More recently, as I mentioned in my previous post, Girls Gone By Publishers have issued reprints of a number of the titles, focusing on those more difficult to come by, but even those are now mostly out of print as well.

My collection - which you can see in full in the photograph in the post on The Player's Boy - is a mix of editions. Over the years, I've managed to acquire hard covers of most of the books. I have one Fanfare paperback, two of the Puffins and the new Faber paperback. It's taken a long time to accumulate the whole series, and much more than a few piggybanks in dollar terms. I'd still like to get my hands on Autumn Term, Peter's Room and Cricket Term in hardcover, and at some point, I'll hunt them down. I have two copies of Autumn Term - the new Faber and a Puffin. My copy of Peter's Room is the Fanfare paperback. The latter two, in good condition - which they are - still command quite high prices, so they can contribute to the costs of the hardcovers. For that purpose, I'll sell them - but for no other! I had a brief period in the early 2000s of finding Fanfare editions in junk shops for $1 or less and through a friend, selling them for massive profits. I note that on Amazon that they still command high prices.

Herein lies the stuff of addiction.

Who cares to share their stories of their particular book addictions? We're all friends...I won't tell too many people...!
Posted by Kaz at 14:49