I just came across a short piece in the Sydney Morning Herald about chef, writer and general food guru, Stephanie Alexander, listing the books she says changed her life - which you can read here. We have a couple of books in comon - Ethel Turner's Seven Little Australians, and you can read my post about that book here - and Alexander's own book, The Cook's Companion, which is one of the most marvelous food encyclopedias to hit the bookshelves in modern times.

It got me thinking about books that have changed my life. It's not so easy, actually, to narrow it down to a manageable list. However, I'd have to start with Anne Frank's Diary of  Young Girl. I was eight when I read that for the first time - a bit young, really, but I was always a precocious reader.

Another is Rumer Godden's In This House of Brede. It is about a woman who, at 42, enters a Benedictine convent to become a nun. It's set in the 50s, and she is - unusually for the time - in a high up position in the British Government and due for promotion, so her decision is seen by many to be a shocking waste of talent and opportunity. Her struggles to adapt and live in a community of women, particularly the young girls who are her fellow postulants and novices, are narrated with particular sensitivity - this being one of Godden's great gifts as a writer. Godden spent many months as the guest of a Benedictine Abbey in the UK, absorbing what she could of the atmosphere and there is a wonderful authenticity about her descriptions of daily life for an enclosed order of comtemplative nuns. I think that the portrayals of human frailties in this book is what strikes me anew every time I re-read it - on average, at least once a year.

The Diary of Frida Kahlo: An Intimate Self-Portait. When I knew that Kahlo's diary was to be published - in facsimile form - I had the most awful internal struggle. I wanted it - I so wanted it. But I hesitated because part of me felt that to own someone's diary - particularly this one - would be a fearful intrusion on them. I had discovered her paintings not long before I went to art school, read a borrowed biography of her by Haydn Herrera (I now have a copy of my own), and I knew she'd kept a diary. At the same time, I was aware that it was, even more than her paintings, mostly drawings, of an intensely personal nature. In the end, I put an order in for it at a bookshop that had advertised it would be carrying it when it was realised in Australia. When the phone call came, I abandoned whatever it was I was doing that day, headed for the city, paid what felt like an enormous sum of money, and it was mine... 'Intimate' is a gross understatement. Kahlo's very soul is on show in this beautifully crafted facsimile edition. I love that inks and paints and holes from one side of the pages can be seen on the reverse side - as they are in the actual book. It gave me permission, in a way, to really embrace my own journal more fully, and there is a marked change in that from the time I acquired Kahlo's. 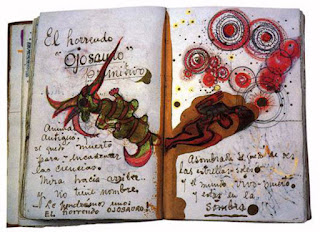 ﻿
Poppy by Drusilla Modjeska. My mother gave me this book, and in my journal there are pages and pages of writing that I did while I read it, wrestling with issues it raised for me. It is Modjeska's fictionalised biography of her mother. Modjeska seamlessly blends fact and fiction to create a story that is simultaneously her mother's story and not her mother's story. She writes of her decision to work this way as a means of protecting her family, to soften the effect. However, she also writes that many members of her family were very angry with her when the bok came out and they read it. I found myself, as I read it, constantly questioning my mother's motives for giving me this particular book as much of the underpinning of the narrative is the mother-daughter relationship... Again, this one I re-read at least once a year.

Chaim Potok's My Name is Asher Lev, and its sequel, The Gift of Asher Lev. I love all of Chaim Potok's books, but these two are the ones I'd take to a desert island. They tell the story of a boy who grows to manhood within a strictly observant Chassidic sect in Brooklyn. He is an only child - unusual in that world - whose father is the Rebbe's right-hand man, and whose mother is a fragile creature, haunted by her family's losses during the Holocaust. And this boy has a gift, a gift that is both misunderstood and vilified by a people for whom the making of 'graven images' is a violation of the commandments. Asher can draw, and not just childish scribbles either. Eventually, when it is evident that it can't be stifled without damaging the boy, the Rebbe intervenes and send him to be taught by a great master - a now very secular Jewish painter and sculptor. This exposes him for the first time to the Western art canon. When he paints his parents crucified, he is sent from the community... It's my personal belief that Chagall was Potok's model for Asher, although there is no docummentation I've ever found to substantiate that. Asher's many struggles to understand the world around him, the complexities of people's emotions, and the many losses he also experience find a voice in his work. It is a wonderful portrait of a painter.

And, since Stephanie Alexander named her own book, I'm going to do something similar. It's not a book - yet. My thesis, Schulim Krimper: Master and Enigma. (the formatting is a bit of a mess - there were all sorts of tech issues that were not addressed before the link went live...)  I think, with the way I write, the most likely book to come out of this will be something along the lines of Poppy - a blending of fact and fiction. It's on the list of things to do - which is WAY bigger than the TBR pile!! I did my MA in art history at the urging of a good friend. In the end, one of the things that motivated me - beyond being hassled by her - was to see what would happen if I had to research and write something really big. I'd done very well at art school with history, with a distinction average for my papers. I'd broken all sorts of rules as I struggled to keep my own voice within the constraints of academic writing. That was an even bigger issue when I got to post-graduate level. In the end, I lived with Krimper - a refugee cabinet maker who escaped Hitler's Germany just in time, and ended up in Melbourne where he had a bespoke furniture making business from 1942 until his death in 1971 - haunting me, urging me on. I kept a printed copy of the photograph below pinned to the wall above my computer monitor. Krimper always wanted a book written about him. There are odd chapters about him in other books, and numerous magazine and newspaper articles from his lifetime, but the only book is a photographic monograph, with photographs by Melbourne photographer Mark Strizic, of which this portrait shot is one: 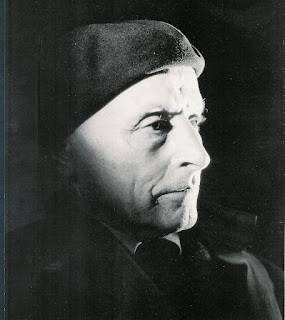 There are other books, of course, others that I could probably give equal weight as 'life-changing', but this morning, after reading the Herald article, these were the first to come to mind. Do you have a list of books that have changed your life?
Posted by Kaz at 17:13