Re-reading books after a long time since the first reading is something I always find interesting, particularly with classics. My memories of reading Anna Karenina as a teenager are that it was a huge read, and sometimes tough going. Reading it now, I can see why that was the case. There is a certain amount of patience required to deal with Tolstoy's presentation of various political and social ideals via several of the characters which can sometimes feel as if the narrative has been suspended. Also, much of the emotional drama is played out within the interior landscape of the central characters, rather than by directly engaging with each other.

That was heightened for me back then due, in part, to my initial encounter with the book via the 1977 BBC TV adaptation, starring Nicola Pagett as Anna. I found a clip on You Tube from the third episode, depicting the horse race where Vronsky falls and his horse is fatally injured. (You can watch it by clicking HERE) Although the liaison between them is known tacitly, there is much that has gone unsaid. When Vronsky falls, Anna, who is at the races with her friend, Princess Betsy, is unable to contain herself, becoming visibly distressed - to the point that her husband, who is present, demands she leave at once with him lest there be a scandal. In the ensuing discussion, much is said by both Anna and Karenin. However, the same scenes in the book have the same information being communicated as part of the narrative, as internal dialogue. Anna doesn't tell Karenin outright that she despises him and his pride. He is unable to tell her how he fears for the disgrace that she could bring upon them, much less how hurt he is...

The contrast in storytelling is a result of what is possible with the different mediums, and there is certainly much more subtlety in the internal emotional turmoil than there is in Anna's quite shrewish spit in the TV series. As a teen, that subtlety was lost on me - particularly having watched the series first. As an adult, I'm much struck by how true to life so many of Tolstoy's characters are. How often do we, in times of emotional difficulties, run over the things in our heads that we wish we could say out loud...and never actually say them? In the case of Anna and Karenin, their lack of sympathy with each other is an insurmountable barrier to any kind of resolution. They have their internal pictures of each other, and are unable to say anything to each other to either clarify or alter that view or understanding of each other - although, in some ways, Anna's sense of Karenin is more accurate than his of her.

I also remember Vronsky in the light of the dashing hero, and that it is entirely understandable that Anna should fall for him. Perhaps I've become too cynical as I've aged (!) but, my overwhelming felling about him is what a cad the man is!! While he is aware that Kitty loves him, he is completely cavalier in his treatment of her because it doesn't suit him to abandon his free and easy lifestyle. Women, particularly young, pretty women, are just social playthings, and Kitty's feelings for him just add an extra frisson to his contact with her, since he enjoys her adoring attention. When he meets Anna, and runs full tilt into an infatuation of his own, Kitty might never have existed, and is discarded without any further thought. Anna, recognising that she too is drawn to Vronsky resists at first, conscious of her status as a married woman, and the wife of a prominent man.

However, as with Kitty, Anna's concerns are meaningless in Vronsky's pursuit of happiness for himself. This is the tragedy for Karenin, I think. Had he been more in tune with his wife, and able to be someone more approachable than he is - there is certainly no doubt that, early in the book, there is a mutual regard and respect in their marriage, but he is a distant man... - perhaps there might have been an avenue for Anna to evade Vronky's pursuit while she was still able to. At the beginning, having met Vronksy when he collects Anna from the Moscow train, Karenin is aware that Anna is disturbed. As time goes on, his suspicions grow, but rather than speak to her on a personal level, he couches his reproaches to her within formal parameters. All that does is reinforce her sense of him as distant and uncaring. Additionally, the largely separate lives of married couples of the Karenins' class ensures that they move within their respective social circles alone. Vronksy is persistent, charismatic, and much loved for his easy good manners and love of fun. Contrast that with Karenin's commitment to his professional life, his conservative and repressed character, and stern moral code, and it becomes easy to see why Anna eventually succumbs, and succumbs fast.

I find myself not liking Vronksy much at all, and Anna less than I did - although, as before, I am intrigued by her inner struggle. Karenin I have a sneaking sympathy for this time around, but I'm impatient with his inability to acknowledge that he has contributed to Anna's lack of fulfilment in their marriage.

Much to my surprise, I am also finding that there are parts of both narrative and dialogue that amuse me mightily. Poor Levin, with his bumbling, awkward proposal to Kitty while she is in the throes of her anguished love for Vronsky, is an object of pity. Conversely, he is also one of the few characters in this early part of the novel who, despite wrestling with how to achieve the finer details of the life he wants, has the bigger picture pretty much sorted. He doesn't like society life in the city, so he stays in the country on his estate. He doesn't enjoy the trappings of gentry-hood, so he lives simply and works with his peasants on the land. He is upfront and clear on his position if anyone asks, and appears not to feel the same pressures that others in his class feel to conform to societal mores. The times he does get tied up in a mess about various issues is when he's trying to stay in tune with whoever he's talking to -  and prevaricates for fear of creating offence. He then flays himself for not sticking to his guns!

I've read Parts 1 and 2, and am well into Part 3 now. You can also read Rachel's post on the first quarter of the novel at BookSnob, along with the comments her fellow readers have posted. She has a group reading along with her, as I have some friends reading with me. Feel free to drop in and leave your comments about Anna Karenina here. I'll be emailing Rachel with a link to this post so we can share the conversation. And keep watching - I'll post again when I get to the end of Part 4. 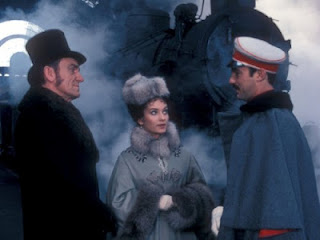